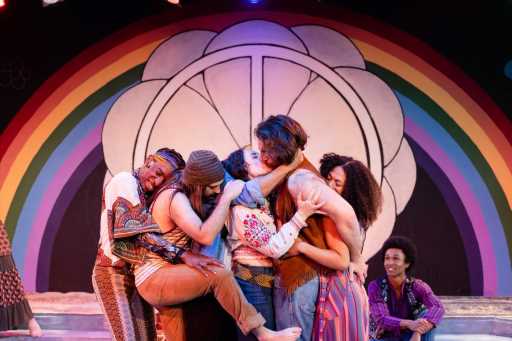 Something feels different — dare we say assured? — about this fall’s theater season. At the opening night of the thrilling “Hadestown” at the Denver Performing Arts Complex last Tuesday, the masks, for the most part, were off.

The sense — the hope — that the pandemic had finally receded wasn’t the cause for the electricity coursing through the Buell Theatre. No, the charge came from what was on stage. In what turned out to be one of its finest shows since “Hamilton,” the Denver Center for the Performing Arts found a perfect way to launch what looks to be a fall season in which audiences can concentrate on and relish the musicals, plays and immersive experiences set for the city.

The biggest of those: the world premiere of David Byrne and Mala Gaonkar’s “Theater of the Mind.” The immersive dive into the exceptional noggin of the artist, musical creator, composer and former frontman of the legendary Talking Heads promises to take us to the river of memory via neuroscience.

Here’s what the fall season holds in store for theatergoers, from world premieres to new-to-the-region shows, to welcome revivals.

The Denver Center. “Theater of the Mind.” One of the chief reasons the Denver Center announced the elevation of its funky-genius Off-Center programming in July is the inspired work of Charlie Miller, who was promoted to executive director and curator of Off-Center at the same time. It was Miller who wrangled  Byrne and Gaonkar’s work — which began as an art gallery exhibit about neuroscience and memory — into a full-blown, immersive experience about time, identity, perception and, best of all, tenderness. The event unfolds at a warehouse in northeast Denver repurposed for the curated amble through Byrne’s mind — and ours. (Through Dec. 18; denvercenter.org)

Local Theater Company. Earlier this summer, the Boulder company announced that Nick Chase and Betty Hart would join founder Pesha Rudnick in guiding the inventive company in its quest for the next great American works as co-artistic directors. For their fall show, they tap the local talent. GeeRee Hinshaw wrote and performs “Raised on Ronstadt,” her loving consideration of the iconic singer from Tucson, Ariz. (October-November; localtheaterco.org)

Wonderbound. The dance performance company is certain to make the dreadful delightful with “Penny Dreadful.” Company founder and choreographer Garrett Ammon sets the tale of everybody’s fave vampire in Paris with a playlist from the 1980s. (Oct. 20-30; wonderbound.com)

Arvada Center. “The River Bride.” As her sister’s wedding approaches, Helena’s life and feelings are altered when her father fishes a man out of the Amazon River in Marisela Treviño Orta’s romantic fable set in Brazil. (Sept. 30-Nov. 6; arvadaCenter.org)

Aurora Fox Arts Center. “Futurity.” Writer César Alvarez and the band the Lisps give peace a chance in this folk-rock fable that starts during the Civil War with an invention that makes peace a reality: the very machines that might create peace. (Oct. 7-30; aurorafoxartscenter.org)

BETC. Last year, the Boulder Ensemble Theatre Company rechristened itself the Butterfly Effect Theatre of Colorado, mindful of the ways 2020 suggested how connected we truly are, and how devastating to our survival disconnection can be. Under the stewardship of producing artistic director Stephen Weitz, the theater kicks off its fall season with British playwright Lucy Kirkwood’s environmental thriller “The Children,” about three nuclear physicists wrestling with professional and personal complications. “It’s everything we look for in a play,” said Weitz. “It asks profound questions of us individually and collectively, while keeping the themes it explores embedded in its rich relationships.” It doesn’t hurt that it features three terrific actors: Sam Gregory, Martha Harmon Pardee and Gina Walker. BETC follows “The Children” with Marco Ramirez’s boxing drama “The Royale.” (“The Children,” Sept. 15-Oct. 18, and “The Royale,” Oct. 27-Nov. 19; betc.org)

Catamounts. If you have a basketball jones and love musicals, then “Small Ball” should score points. The surreal, playful musical — book and lyrics by Mickle Maher, music by Merel van Dijk and Anthony Barilla — finds a hoopster by the name of Michael Jordan playing with Lilliputian-size teammates.  (Oct. 29-Nov. 30; thecatamounts.org)

Curious Theater Company. The town’s indispensable indie theater opens its 25th anniversary with new artistic director Jada Suzanne Dixon at the ready. “We are always looking for great storytelling that elevates or challenges the issues that we as a society are grappling with,” she said of this season’s theme: “What does it mean to be an American?” It’s a question asked — and answered — in different ways by Will Arbery’s “Heroes of the Fourth Turning,” about friends who return to the town of their conservative Catholic college seven years after graduation with a lot on their minds and plenty of debate club skills to say it, and Lloyd Suh’s “Franklinland,” about fathers and sons, specifically Benjamin Franklin and his illegitimate son, William Franklin. (“Heroes,” Sept. 10-Oct. 15, “Franklinland” Nov. 5-Dec. 10; curioustheatre.org)

Denver Center for the Performing Arts, Broadway. “Hadestown.” Anais Mitchell’s retelling of the Greek tragedy about Orpheus and Eurydice makes for a do-not-miss night. (You have until Sept. 11.) Then, after its touring company pulls up stakes, the hits will keep coming. First: “Come From Away,” the irresistibly moving musical about airline passengers grounded on 9/11 in Nova Scotia and the locals who welcomed them. Then, the jukebox pleasure “Ain’t Too Proud to Beg: The Life and Times of the Temptations.” Here, Detroit’s own wonder and MacArthur Fellow, playwright Dominique Morriseau, steps in to tell the story of one of Motown’s best. Sergio Trujillo won a Tony for best choreography.

The Denver Center Theatre Company. “The Chinese Lady.” In telling the story of Afong Moy — the first recognized Chinese woman to come to the United States — Lloyd Suh’s drama reckons with her exhibition and exploitation. And, thanks to Moy’s insights, we learn about the character of the nation she traveled across and where she was displayed as an object of curiosity. (Sept. 9-Oct. 16; denvercenter.org)

The Newman Center brings the Oakland, Calif.-based vertical dance troupe Bandaloop to town, and it wants to make sure you see the high-wire act. So check out the free performance on Sept. 29. While you’re at it,  see what else the smartly programmed season holds. (Sept. 29, newmancenterpresents.com)

Arvada Center. “Into the Woods.” This production of the Stephen Sondheim-James Lapine delight announces a marked change at the arts hub with Lynne Collins taking the helm as artistic director after Rod Lansberry’s retirement. (Sept. 9-Oct. 9; arvadacenter.org)

Buntport. “Coyote. Badger. Rattlesnake.” Denver’s ingenuous theater-makers reprise their witty and wily comedy about two colleagues at work on — and bickering about — a diorama at a natural history museum. (Sept. 30-Oct.15; buntport.com)

Lakewood Cultural Center. “A Grand Night for Singing.” Think of it as Richard Rodgers and Oscar Hammerstein II’s B sides. (Oh, how that dates us.) While this revue features tunes from lesser-known musicals — “Allegro,” “Me and Juliet,” “State Fair” and “Pipe Dream” among them — it can’t help throwing in hits from the likes of “Carousel,” “Oklahoma!” and “The Sound of Music.” (Sept. 9-25; lakewood.org)

Miners Alley Playhouse. “Hair.” The Golden theater is letting the sun shine in this timely production of the classic about hippies, peace, love and friskiness in the shadow of the Vietnam war. (Through Oct. 2; minersalley.com)

Town Hall Arts Center. Why pop Xanax when you could drop by this Littleton playhouse for a dose of “Xanadu,” Douglas Carter Beane’s effervescent adaptation of the 1980 movie that starred Olivia Newton-John. Then, one of musical theater’s titans is celebrated with “Putting It Together. A Staged Concert Featuring the Music and Lyrics of Stephen Sondheim.” (“Xanadu,” Sept. 16-Oct. 16; “Putting It Together,” Oct. 27-30; townhallartscenter.org)