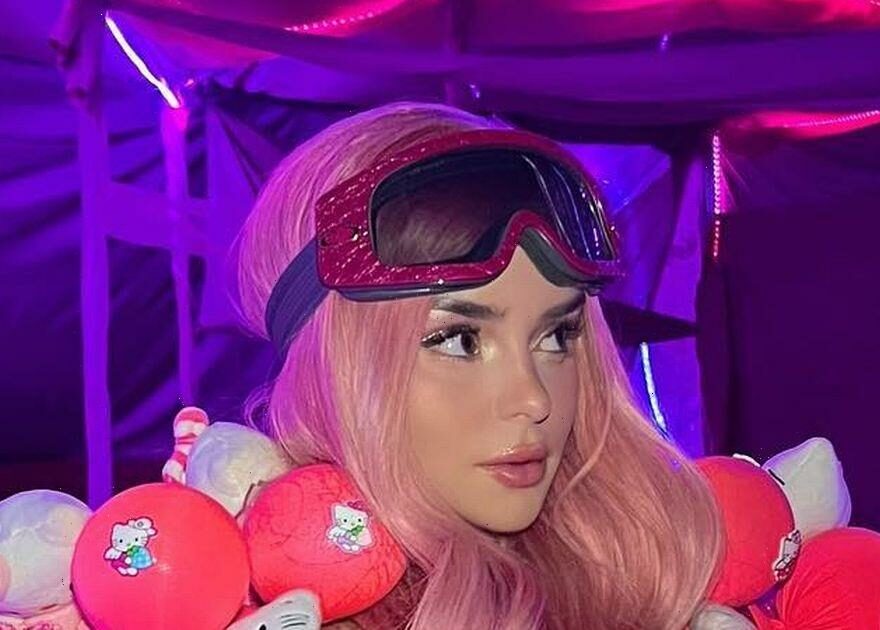 Heed this warning, Demi Rose fans: your favourite glamour goddess has dropped a slew of brand-new snaps – and they’re saucier than ever.

The OnlyFans queen has flooded her feed with her priceless memories at the Burning Man festival this weekend, and she’s made sure to keep her loyal legion of fans in the loop with plenty of snaps.

The stunning Brummie model, 27, took to her Instagram Story on Monday (September 5) with one of her hottest looks of late as she poured her killer curves into the ultimate Hello Kitty costume.

She could be seen in a striking pink corset which framed her ample assets that were loosely contained by sheer fabric and nipple tassels.

Her pink garment was covered in a slew of Hello Kitty plush teddies which overwhelmed her shoulders with the star opting to cover her bottom half in a pair of matching pink fishnet tights and little else.

Demi accessorised the daring look with a matching white Hello Kitty crossbody bag and a pair of matching ski goggles which she rested on top of her luscious pink wig.

The model finished the look with a set of knee-high socks and matching white high heels as she posed up a storm beside a large pink neon love heart light. After spending hours of the glamorous ensemble, the brunette beauty made sure to give her loyal followers a closer look at her stellar outfit as she finished the look with a full face of glamorous makeup.

She rocked glowing skin in addition to a pinch of blush on her cheeks and pink sparkly eyeshadow on her eyelids which she paired with a Barbie pink lipstick as she blew a kiss to the camera.

Demi captioned the eye-popping display: “Back at my favourite place in the World” before she was flooded with adoring comments from potential suitors online.

After nine days of celebrations at the windswept festival, the 80,000 people who travelled to Black Rock desert in northern Nevada were forced to leave the city on Monday which resulted in major traffic and lengthy lines.

In the run up to Labour Day, the mass of festival goers danced throughout the night in front of flaming sculptures in addition to a stunning light show and a massive Mad Max-inspired cinematic fight as the event drew to a close.