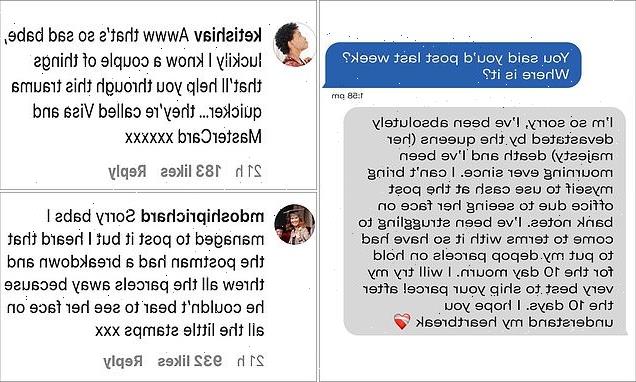 A Depop customer was left stunned after a seller blamed the late postage of an item on the Queen’s death – saying they can’t bear to see the monarch’s face on bank notes.

In an exchange on the app, which has gone viral since being shared on Instagram, the anonymous buyer asked where the order was, explaining it is several days late.

In a bizarre response, the seller, who is also anonymous, said they haven’t been able to send the package due to the Queen’s death. 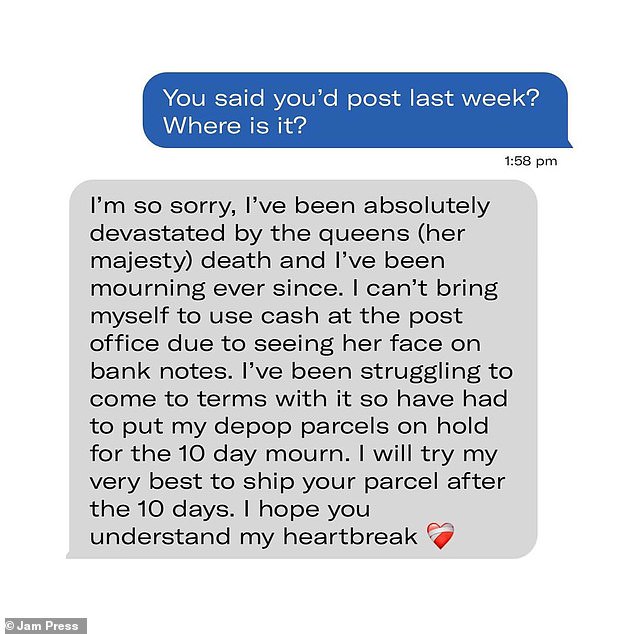 After sharing the exchange online, a number of social media users jumped in to mock the seller and their reason for the delay

The seller explained: ‘I’m so sorry, I’ve been absolutely devastated by the Queen’s (Her Majesty) death and I’ve been mourning ever since.

‘I can’t bring myself to use cash at the post office due to seeing her face on bank notes.

‘I’ve been struggling to come to terms with it so have had to put my Depop parcels on hold for the 10 day mourn. I will try my very best to ship your parcel after the 10 days. I hope you understand my heartbreak.’

The conversation was shared on Instagram, where it racked up 23,000 likes.

Users were quick to mock the seller’s excuse.

Some users recommended the seller use a bank card instead of cash, to avoid seeing the late monarch’s likeness, whereas others posted sarcastic comments

‘Awww that’s so sad babe, luckily I know a couple of things that’ll help you through this trauma quicker… they’re called Visa and MasterCard,’ joked another viewer.

Someone else said: ‘Use your bank card…’

‘Someone with ER ll empathy x 100,’ commented another user.

Someone else added: ‘I’m observing the official mourning period so you ain’t getting your package. When I looked at £10 note I was shaking and in tears.’