Opposition MPs have accused Labor minister Harriet Shing of using confidentiality laws during her time as the head of a parliamentary integrity committee to gag Victoria’s corruption agencies from discussing matters that could be politically damaging for Premier Daniel Andrews.

In a Coalition minority report not yet tabled in parliament, but obtained by The Age, opposition MPs claimed the committee, which monitors the performance of agencies like the Independent Broad-based Anti-corruption Commission, “fundamentally abrogated its responsibilities to witnesses, the integrity bodies it oversees, the Parliament, and the people of Victoria”. 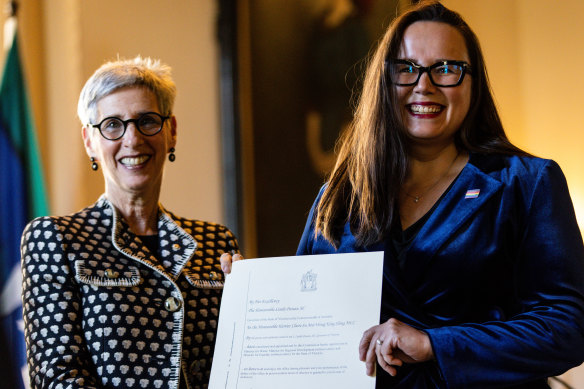 Harriet Shing (right) with Governor Linda Dessau after being sworn in as a government minister.Credit:AAP

“Opposition members of this Committee believe that the work of the IOC (Integrity and Oversight Committee) should be removed from party politics, as the work of this Committee is undertaken on behalf of the Victorian Parliament and people,” said the report, authored by deputy chair, Liberal MP Brad Rowswell, and former Coalition treasurer Kim Wells.

“Members of the Committee have an obligation to the Parliament and not the PPO (Premier’s Private Office).”

The committee will this week release its report into IBAC’s handling of witness welfare, sparked by the suicide of a former council mayor who IBAC was questioning. The committee process allows dissenting MPs to write a so-called minority report if they object to the position of the majority of MPs.

The Integrity and Oversight Committee is comprised of four government MPs, two Liberals and independent Stuart Grimley from Derryn Hinch’s Justice Party. Only the Liberal MPs put their names to the minority report. 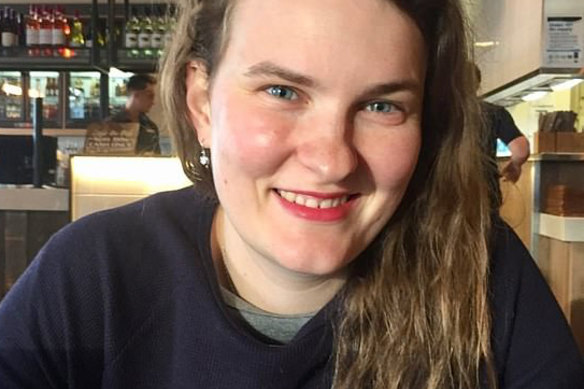 The Age can also confirm that Shing, who stepped down as IOC chairperson when she was promoted to cabinet in June, updated her register of interests to declare that she is in an ongoing relationship with the premier’s chief-of-staff, Lissie Ratcliff.

In the register, which allows the public to learn about MPs’ financial and personal ties, Shing wrote: “Partner is the Premier’s Chief of Staff. A management plan is in place to limit the risk of a perceived or actual conflict of interest.”

The register was updated on July 28, three days after The Age asked Andrews about the relationship at a press conference and he dismissed it as irrelevant.

“A person’s partner — I don’t know if that’s relevant to them doing their job,” he said. 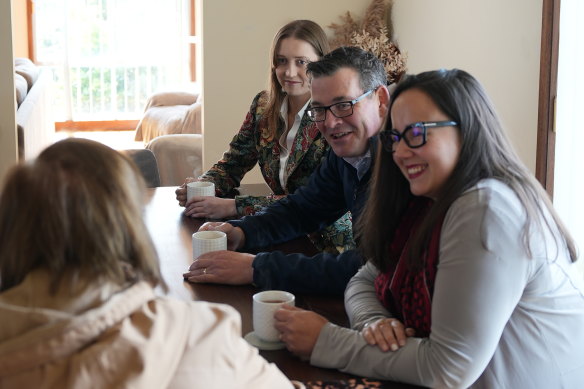 “Particularly when they are in a long-standing relationship and have been doing their job … not just to my satisfaction, but have done an outstanding job for our state.

“Is it the nature of the relationship that seek you ask that question? I don’t know if that was a different relationship, then perhaps that question wouldn’t be asked. But in any event, I don’t think that’s relevant.”

The Age has requested details of the management plan.

Central to the Liberals’ concern in their minority report is a hearing in which IBAC boss Robert Redlich answered the committee’s questions in public.

Then-chair Shing repeatedly interrupted and cut off Redlich and MPs when she deemed questions or answers were veering towards the specifics of ongoing inquiries including Operation Watts or Operation Sandon. The premier has been interviewed for both inquiries, but is not the subject of either.

At one point, Shing instructed committee administrators to turn off the broadcast after Redlich was asked a question about Andrews.

Liberal committee members and Redlich argued she misinterpreted the committee’s laws, which prohibit any discussion that may prejudice criminal or civil proceedings or probes being conducted by agencies like IBAC. 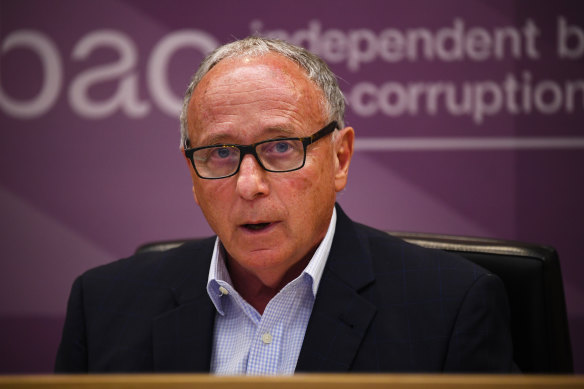 “No, no. But I am speaking theoretically here, not about individuals,” Redlich replied to Shing when she reminded him he should not discuss an ongoing probe.

In a strongly worded follow-up letter to the committee, Redlich said Shing’s “continued ruling” was misguided because the state did not preclude committee members asking and IBAC officials answering questions about witness welfare, unless that information would likely prejudice an investigation.

“Whether it would in fact do so, must be a matter for IBAC, not the chair of the committee,” Redlich wrote.

In their report, Rowswell and Wells said the committee failed in its duty to properly examine witness welfare processes because Labor MPs refused to draw general observations from witnesses, identify common threads of their statements, or ascertain similarities in the experiences expressed by them. All of these things could have been done without prejudicing investigations, they said.

“This calculated decision of the Chair was, in our view, an exercise of misguided authority that consequently raised broader concerns about the chair’s handling of the public inquiry,” the dissenting report said.

“It was deeply disappointing and damaging for Labor Government members of the Committee to act in this way. These actions undermined the stated purpose of the inquiry and damaged the important role of the IOC, on behalf of the Parliament, to hold integrity agencies accountable and seek the truth.”

IBAC and Labor MPs on the committee have previously exchanged fiery correspondence, diminishing the relationship between the state’s most important agency and the MPs who oversee it and inflaming the debate over political integrity in Victoria ahead of the November state election.

IBAC has raised serious concerns that the committee has leaked confidential material to the media that could compromise ongoing investigations.

A government spokeswoman said Shing had “always conducted herself appropriately in any role she has held by keeping the work of committees confidential”.