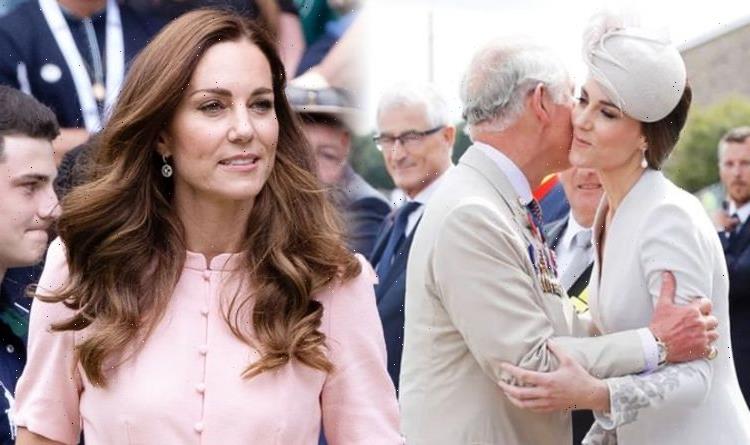 Kate Middleton and Prince Charles both have important roles in the Royal Family. Their body language could show the important part Kate played in Charles’ relationship with Prince William.

Kate, Prince William and Prince Charles are all senior working members of the Royal Family.

Their roles within the monarchy are likely to grow in the future.

The Duchess of Cambridge seems to have integrated naturally into the family since her wedding to Prince William 10 years ago.

She may play an important part in the relationship between Charles and William, body language expert Judi James said.

She claimed: “There have been rumours that William and his father haven’t always seen eye to eye.

“But with Kate present the mood between the two men does seem to lighten.

“While the two men point and laugh open-mouthed to suggest there’s some kind of banter going on between them, Kate’s polite attention to Charles and her appreciative smiles as he chuckles suggests she might have mended a few bridges between them over the years.”

Analysing the body language of the royals, Judi suggested the Duchess has helped bring the family closer together.

She added: “Kate’s role in Prince Charles’s life appears to be that of a catalyst rather than a friend or kindred spirit.

“The secret reason why he so often looks happy and fun-loving in Kate’s company might be more to do with the fact that she forms an integral buffer or air-bag role in the relationship triangle that includes his son William.”

More recently, the body language between Kate and Charles may have hinted at a close relationship behind closed doors.

The expert commented on Kate openly comforting her father-in-law at the funeral of Prince Philip in April this year.

Judi said: “At his father’s funeral, as he was visibly moved by grief and even tearful at times, it was Kate who was spotted placing a comforting arm around Charles’s shoulders.

“[It was a] very tactile and spontaneous gesture of open affection that seemed surprising at the time.

“Both Kate and her father-in-law are known for their rather politely formal body language displays at the bigger royal occasions and neither are overly tactile.

“It usually takes niece Zara Tindall to break through Charles’s public reserve with hugs and laughter.

“However, the way that Kate performed her hug with ease and confidence suggested she and Charles might have grown a warmer relationship than expected behind the scenes.

“Previous photos of the pair here do show a theme of unexpected rapport and affection between them.

“What makes this even more surprising is that William’s relationship with his father has been uneasy at times and these displays of affection from Kate look as though she is taking the lead rather than following her husband’s.”