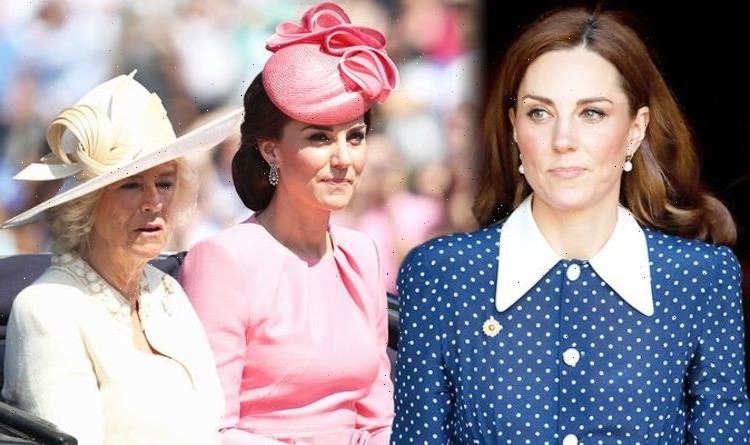 Kate Middleton and Camilla, Duchess of Cornwall have similar roles in the Royal Family. However, a body language suggested they have not formed “close bonds” despite an “affectionate” relationship.

Camilla tied the knot with Prince Charles in 2005.

Both women took on senior working roles in the family when they wed.

This has seen them attend a number of events together over the years.

When they have been seen in public, the royals appear to get on well.

This contrasts to how Kate has been seen with her father-in-law Prince Charles, Judi claimed.

“Most of their poses together tend to be on more formal royal occasions.

“This will have an impact but we can see add-on signs of active attention and shared humour between Kate and Charles to suggest some strong father-and-daughter-in-law rapport.

“There are very few moments between Kate and Camilla where we are shown the two women using the more emphatic tie-signs that might suggest similarly close, relaxed and more easy-going bonding.”

The appearance of a more formal relationship could be due to the nature of their public appearances.

Kate and Camilla are usually only seen in public when they are representing the monarch.

When with Camilla, Judi claimed the Duchess of Cambridge sticks to “an upright position”.

This contrasts to her body language with Queen Elizabeth II, the expert continued.

She said: “When Kate is with the Queen she will often lean slightly to diminish the height gap and employ face-watching and eye contact to tune in.

“With Camilla there appears to be less of a tendency to close gaps and pay ongoing, active attention to one another.

“Kate in particular is seen sitting or standing in a very upright position.

“The pair do clearly speak and exchange warm smiles.

“But it is Charles who seems to ‘light up’ the dynamic when he is present, cracking jokes and looking animated while Kate wrinkles her nose in a laugh of genuine humour and rapport while William and Camilla enjoy the fun from a slight distance.

“In many ways it looks as though it might be their shared affection for Charles is the prime tie that binds the two women.”