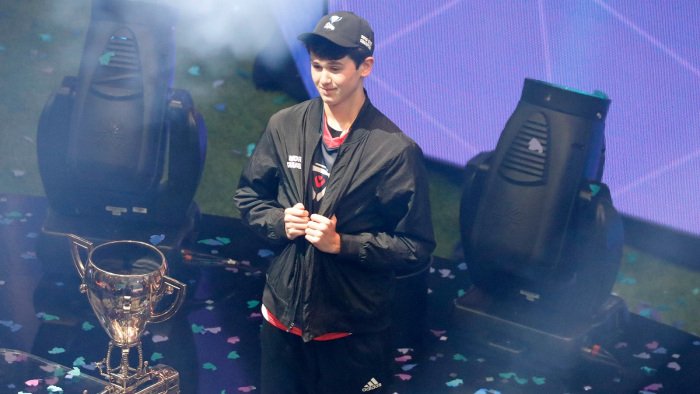 The winner: 16-year-old Kyle Giersdorf, aka “Bugha,” a Fortnite player from Pennsylvania who handily defeated the field. The Fortnite World Cup Finals 2019 took place at the Arthur Ashe tennis stadium in Queens, N.Y.

On Twitch and YouTube alone, Sunday’s live-stream of the finals of the popular battle-royale game had more than 2 million concurrent sessions, according to esports consultant Rod Breslau, citing the public data from the services. An Epic Games rep said an official viewership tally for the finals was still pending.

On Twitter, Giersdorf tweeted after winning the cup, “Today was indeed the day… 🏆.” (Early Monday, his team, The Sentinels, posted a tweet on the account that “Bugha’s phone and social media accounts have been compromised. We are aware of the situation and are working to regain control.”)

“Words can’t really explain it. I’m so happy,” Giersdorf told CNN. “Everything I’ve done in the grind has all paid off and it’s just insane.”

The Fortnite World Cup Finals ran July 26-28 and featured the top 100 solo players and the top 50 duo teams from around the world to compete for a total $30 million prize pool. Every player was guaranteed at least $50,000 in winnings.

In second place in the individual competition was, Harrison “Psalm” Chang, who won $1.8 million, followed by Epikwhale (a top Fortnite player who has remained anonymous) with $1.2 million and Nate “Kreo” Kou, who took home $1.05 million.

On Sunday, Epic Games also shared a teaser of the upcoming season 10 of “Fortnite,” with a tweet apparently showing the return of the island’s Dusty Depot — three warehouses demolished by a comet at the end of season 3. The game developer also announced that there will be a new competitive-play format for season 10, the Fortnite Championship Series.