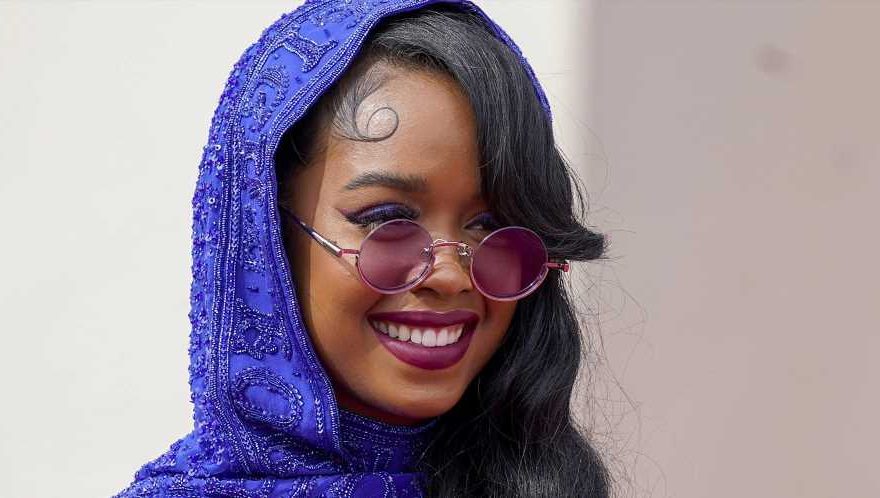 H.E.R. just blessed the red carpet (and our screens) with yet another eye-catching ensemble. For the 2021 Oscars, the singer's outfit choice was inspired by an iconic look worn by a legendary artist who took home the very same award she's nominated for tonight.

The "Hard Place" artist's custom Dundas jumpsuit and cape was inspired by Prince's 1985 Academy Awards look, aka the year he won Best Original Song for his unforgettable song "Purple Rain," from the film of the same name. "H.E.R. expressed how Prince has been a lifetime inspiration for her and had built the foundation for her musical identity," designer Peter Dundas told InStyle.

The chic royal blue jumpsuit and hooded-cape was hand-embellished with sequins and beaded details. While the look is inspired by Prince, there's a one very specific detail that makes it unique to H.E.R. The border of the jumpsuit and cape emblazoned with the powerful lyrics from her nominated song, "Fight For you." "I wanted [it] to feel like armor — words have such great power and it's impossible not to feel touched by the important and impactful message of strength and justice behind the song, especially given what is happening in the world right now," said Dundas.

The jumpsuit featured wide legs and cutouts in the midsection, which was paired with a cascading hooded-cape, a matching cuff bracelet, and blue-lensed round glasses. Wearing a revamped version of the look wasn't only a dream of H.E.R.'s. Dundas says music has often inspired his work. The two's artistry beautifully came together in this piece to create one unforgettable look. "Together with Wouri, [Vice, H.E.R.'s stylist] she mixes 1970s and '80s glam with both masculine and feminine, which is what I try to do with my collections, so we felt it was the perfect fit," said Dundas.

Wouri Vice was also excited to work with the designer.

"The creative process for H.E.R.'s Oscars carpet look was truly a pleasure," he told us. "Working with Peter and his team really allowed H.E.R. and myself to be as visionary as possible. We were inspired by Prince's first trip to the Oscars where he won best song for 'Purple Rain.' With him being one of her favorite artists, we decided to channel that winning energy. H.E.R.'s mother has always wanted her to wear blue on the carpet and we felt this was the perfect opportunity. The ultimate goal for any red carpet is to have your client shine."

We hope that this look brings H.E.R. the same luck it brought Prince back in 1985!