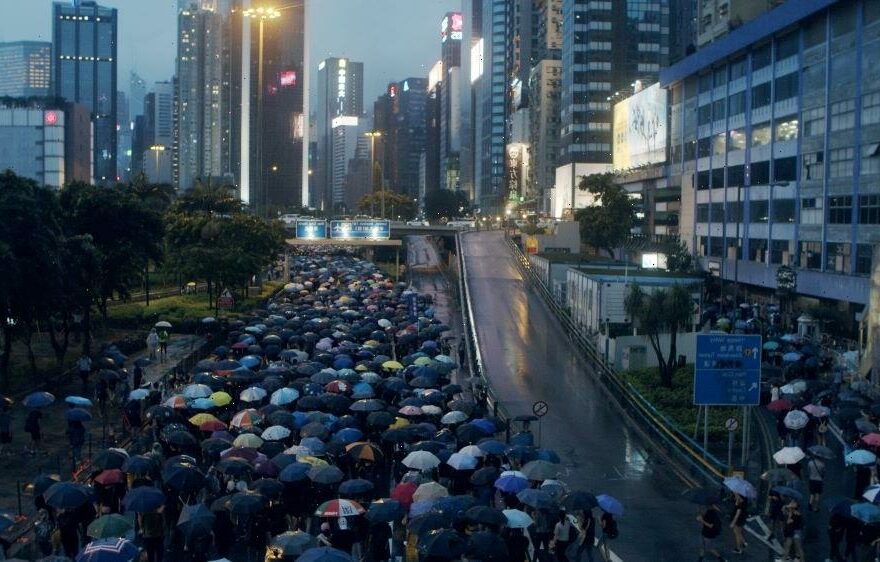 To Hong Kong documentary filmmaker Ngan Chi-sing, seeking asylum in the U.K. is going to be one of his priorities in the coming year. That’s because he has made a film about the 2019 protests that he fears would endanger his security, should he ever return to his home city.

“Hong Kong cannot tolerate documentary films like mine anymore,” Ngan, the director of “Love in the Time of Revolution,” which premieres this week at the inaugural edition of the Melbourne Hong Kong Film Festival running from June 12-19 in Australia, told Variety. Ngan himself handles the international sales of the film, which appeared in Vision du Reel earlier this year.

The 35-year-old is not alone. Over the past year, a growing list of filmmakers, artists, creatives and media personalities have left Hong Kong following the implementation of the National Security Law on June 30, 2020. Since then, over a hundred have been arrested, including pro-democracy politicians, activists, and journalists from the now-defunct Apple Daily and Stand News. The local authorities have also revived colonial era laws on sedition to silence opposition voices.

Many of the new exiles have settled in the U.K. due to visa arrangements which allow British National (Overseas) passport holders a pathway to full U.K. citizenship. Latest U.K. government figures show 123,000 people using the scheme since it was launched on January 31 last year.

Among those who have settled in the U.K. are: documentary filmmaker Tammy Cheung, critic and TV scriptwriter Alex Pao, and Ng Chi-sum, the former show host of RTHK program “Headliner,” Hong Kong’s oldest satirical current affairs program which was taken off air in June 2020.

The past weeks also saw popular political cartoonists, including Ah To, vawongsir, and Hong Kong Worker, departing Hong Kong for the U.K. Author and Commercial Radio show host Chip Tsao is also in the U.K., teaming up with his former radio show co-host Pao to create a new YouTube channel commenting on Hong Kong current affairs.

“If you comment or criticize the authorities, particularly the Communist Party, the police and National Security officers on your YouTube channel in Hong Kong, you risk being accused of breaching laws such as the sedition law,” said Benson Wong, a former Baptist University professor who relocated to the U.K. last year while continuing to comment on current affairs on a YouTube channel called Hong Kong Uncensored.

“The only way to survive, is that you either self-censor, or you leave Hong Kong in order to continue to speak up truthfully and honestly while making critical comments on online platforms, such as YouTube.”

In the case of Ngan, the migration road is not smooth. He was born in mainland China, which means he has no access to the BNO visa scheme should he choose to stay in the U.K.

Fearing repercussions, Ngan has no choice but to stay away from Hong Kong, especially after the 2021 tightening of the film censorship law, which bans titles that “threaten national security.” Protest-related films such as “Inside the Red Brick War” and “Revolution of Our Times” have already been barred from the big screens in Hong Kong.

How thoroughly Hong Kong authorities are willing to assert the law is currently being tested. Global streaming service Vimeo two weeks ago began carrying “Revolution of our Times,” the protest documentary by Kiwi Chow that debuted at Cannes last year.

While the film has no chance of reaching Hong Kong theaters its availability for online viewing in the city has sparked many questions about the legality of watching banned content in the privacy of a viewer’s own home. The police issued a warning that residents should not watch something if they were not sure of its legality. But they declined to spell out the authorities’ position on the matter. So far, nobody is known to have been arrested for watching the film. And Chow, who says he is staying put whatever the consequences, remains at liberty within the city.

Nevertheless, Ngan says that staying away from Hong Kong may be the only way to continue with this kind of work. “These Hong Kong diasporas are still living through the trauma while struggling to adapt to a new life in a new place. They have a lot of stories to tell,” he said.