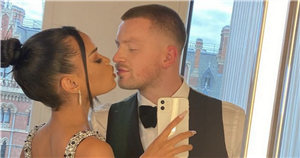 Strictly Come Dancing has returned to our screens and fifteen celebs have taken to the ballroom dancefloor, hoping to impress the judges.

The BBC1 show has seen a number of new professional dancers introduced for 2021 after we bid farewell to the likes of AJ Pritchard,Kevin Clifton and Janette Manrara.

Olympian and professional swimmer Adam Peaty is amongst the many celeb contestants hoping to show the Great British public what he's capable of, but little is known about the star's life beyond his sporting career.

We've done some digging and found out everything you need to know about Katya Jones' Strictly parter as he prepares to shake his hips on our screens every Saturday.

Here's all the information on Adam Peaty, his family life and his relationship with girlfriend Eirianedd Munro… Who is Strictly's Adam Peaty and how old is he?

The Strictly Come Dancing contestant hails from Uttoxeter in Staffordshire and has three older siblings.

Hilariously, the world champion swimmer had a huge fear of water as a child, and was even scared of going in the bath after his older brothers told him that sharks could come up the plug hole.

As you can imagine, his fear didn't last too long and a few swimming lessons later, the English sportsman has now scooped up multiple Olympic medals in both 2016 and 2021, is an eight-time World Champion, a sixteen-time European Champion and a three-time Commonwealth Champion. Who is Adam Peaty's girlfriend?

Through his training at Loughborough University, Adam met his girlfriend Eirianedd Munro in 2017.

Eirianedd, 23, was studying Fine Art at the University at the time, but has since graduated and now works as an artist. Her art account, @emunroart, has over 2.5K followers and she regularly shares snaps of her incredibly paintings, which range from oil paintings of the rapper Dave to stunning self-portraits.

Eirianedd – who also goes by Eiri – is one of four siblings, and regularly features glimpses of family life on her social media channels. Does Adam have any children with girlfriend Eirianedd?

Back in April 2020, both Adam and Eiri announced that they were expecting their first child together, a baby boy.

George Anderson Adetola Peaty was born on September 11, 2020, and has just celebrated his first birthday.

For George's big day, mum Eiri dedicated a series of posts on her Instagram to her cute toddler.

Alongside a slideshow of family snaps, she wrote: "George Anderson is 1 years old. What a year it’s been.

"He is the most curious and joyful little boy. Passionate and adventurous, clever and sweet.

"He has such an inexplicable charm about him and his joy is absolutely contagious."

She continued: "George, you are a brilliant and beautiful light that shines so so brightly. Bringing happiness to others is your destiny.

"I am so proud to be your mother. Happy 1st birthday."

Which awards have Adam won?

Adam Peaty has scooped endless awards for his incredible talents, and amongst them are the FINA award for Best Male Swimming Performance of 2015 following his triple gold medal win at the World Championships in Kazan.

The following year he was honoured once again by FINA, this time for the Best Male Olympic Swimming Performance of the Year award after he broke the 100m breaststroke world record at the 2016 Olympics.

Then in 2017, Adam was appointed a Member of the Order of the British Empire (MBA) for his services to swimming during the New Year Honours.