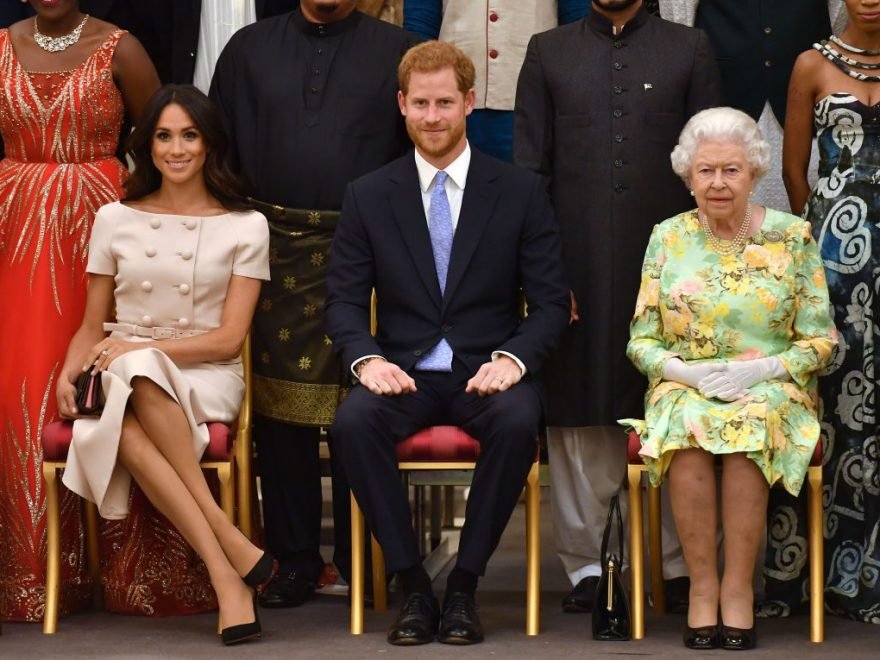 Prince Harry and Meghan Markle have been in hot water a lot lately. In August, they were lambasted by the public for taking private jet flights four times in 11 days. Now the couple is facing some criticism again for how they are treating Queen Elizabeth. Their recent decision behavior has reportedly left the queen “disappointed.”

Queen Elizabeth spends her summer at Balmoral Castle in Scotland every year. She and her husband, Prince Philip, stay there until October.

Although the other members of the royal family do not spend as much time at Balmoral as the queen, Her Majesty often invites them to visit her there for a short period of time.

Princess Eugenie once gave a glimpse into what things are like for the royals at Balmoral: “Walks, picnics, dogs – a lot of dogs, there’s always dogs – and people coming in and out all the time. It’s a lovely base for Granny and Grandpa, for us to come and see them up there where you just have room to breathe and run.”

Prince Harry and Meghan Markle declined the invitation to Balmoral

This morning, The Duke and Duchess of Sussex’s son, Archie Harrison Mountbatten-Windsor was christened in the Private Chapel at Windsor Castle at an intimate service officiated by the Archbishop of Canterbury, Justin Welby. The Duke and Duchess of Sussex are so happy to share the joy of this day with members of the public who have been incredibly supportive since the birth of their son. They thank you for your kindness in welcoming their first born and celebrating this special moment. Their Royal Highnesses feel fortunate to have enjoyed this day with family and the godparents of Archie. Their son, Archie, was baptised wearing the handmade replica of the royal christening gown which has been worn by royal infants for the last 11 years. The original Royal Christening Robe, made of fine Honiton lace lined with white satin, was commissioned by Queen Victoria in 1841 and first worn by her eldest daughter. It was subsequently worn for generations of Royal christenings, including The Queen, her children and her grandchildren until 2004, when The Queen commissioned this handmade replica, in order for the fragile historic outfit to be preserved, and for the tradition to continue. Photo credit: Chris Allerton ©️SussexRoyal

The Sun reported that Prince Harry and Markle have opted to not join the queen at Balmoral this year. They did not go last year since Duchess Meghan was in the early stage of her pregnancy, but the couple is not going this year either because their four-month-old son, Archie, is still too young.

“Harry and Meghan had no plans to go to Balmoral this summer as they felt Archie was too young,” a source told The Sun. “It’s a bit odd, as his age didn’t stop them taking him to Ibiza for a week and then to see Elton John in France.”

Meanwhile, Prince William and Kate Middleton visited Balmoral in August with their three children. The family traveled to Scotland on a commercial, budget airline. They were joined at Balmoral by other royals like Princess Anne and Peter Phillips.

Queen Elizabeth is reportedly “disappointed” in the Sussexes

Today The Duke of Sussex attended a Garden Party at Buckingham Palace alongside Her Majesty The Queen and other Members of The Royal Family. The Queen hosts Garden Parties as a means of recognizing guests for the good work they are doing in their communities, a tradition steeped in history and dating back to the 1860s during Queen Victoria’s reign. The Duke and Duchess of Sussex attended their first official Garden Party as a couple last May at Buckingham Palace just days after their wedding, in celebration of The Prince of Wales’ charity work, patronages and military affiliations. Today, The Duke of Sussex met with several guests including those that he and The Duchess extended a personal invitation to based on their extensive work in the community. His Royal Highness met with a representative of @africanparksnetwork (of which he is President), a mental health consultant for @weareinvictusgames and countless others who are leading by example with high impact cause driven work. The Duke also greeted several representatives of The Duchess’ patronages on her behalf, as she is on maternity leave and was unable to attend. These include members from @themayhew @thenationaltheatre and @smartworkscharity as well as The Association of Commonwealth Universities. Amongst the 8,000 people attending today were Members of the Armed Services, Ambassadors as well as those who have made a positive impact through the arts, charity work and volunteering. Thank you to volunteers, staff and all of those who dedicate their time and energy to working towards the collective good. We appreciate all that you do 👏

While the queen was visited by a lot of other family members, she does not seem to be happy about Prince Harry and Duchess Meghan choosing not to visit her. The source told The Sun that Her Majesty is “disappointed” that Markle — who she likes very much — has never been to Balmoral.

“If they want privacy or protection — which was Harry’s excuse for taking private jets — there is no more protected or private holiday destination than the Queen’s Scottish home,” the insider said. “It’s all very hunting, shooting, fishing up at Balmoral, so maybe that put Meghan off. She has never been to Balmoral and the Queen was disappointed they’re not going.”

Spotlight on: Smart Works We are proud to be supporting a very special initiative this autumn for @SmartWorksCharity! After quiet visits to Smartworks over the last year, The Duchess was moved by the impactful work being done by this non profit organisation that helps women into the workforce, equipping them with both the skills and clothes they need to feel job-ready. Throughout her visits she noticed that while the donations were plentiful, they were also notably a combination of mismatched items and colours which weren’t always the right stylistic choices or sizes that didn’t necessarily “suit” the job at hand: to make a woman feel confident and inspired as she walked into her job interview. As a result, launching this autumn, The Duchess will be supporting a collective to help equip the women of Smart Works with the key workwear essentials they need as they enter into the workplace. This initiative is supported by four generous brands who share the vision to empower the women of Smart Works to look and feel 💯 as they bravely venture in to what can often be a daunting environment for those who have been out of the job market. The brands have come together to work towards this united force for good, “[reframing] the idea of charity as community,” as The Duchess writes in a piece for this month’s British Vogue. They will follow the 1:1 model where an item from the collection purchased is an item shared with a woman of Smart Works because “not only does this allow us to be part of each other’s story; it reminds us we are in it together.” For more information on how you can be part of another woman’s success story visit @smartworkscharity. Special thanks to: @JohnLewisandPartners, @MarksandSpencer, @MishaNonoo, @InsideJigsaw for supporting this very special organisation. And to find out more, read the September issue of @BritishVogue and stay tuned for more exciting updates this autumn. Photo©️SussexRoyal

Earlier this month, after news that Markle would not be visiting Balmoral came out, the duchess was suddenly seen in New York to support her friend Serena Williams at the U.S. Open Tennis Tournament. This did not sit well with a lot of critics, who found it baffling that Markle would take an impromptu trip to New York when she apparently could not visit Balmoral at all.

Sarah Vine from The Daily Mail called it “undiplomatic and insensitive.” Vine also continued: “After all, Serena is no relation. The Queen, by contrast, is baby Archie’s great-grandmother, not to mention being in her 94th year.”

TRH The Duke and Duchess of Sussex are excited to announce that they have been asked to carry out a tour to Southern Africa this autumn. The Foreign and Commonwealth Office have requested a visit to South Africa 🇿🇦 as well as The Duke carrying out visits to Malawi 🇲🇼 and Angola 🇦🇴. His Royal Highness will also do a short working visit to Botswana 🇧🇼 en route to the other countries. The Duke and Duchess are really looking forward to meeting so many of you on the ground and continuing to raise awareness of the high impact work local communities are doing across the Commonwealth and beyond. This will be their first official tour as a family!

Queen Elizabeth and Markle are known to have a great relationship, but it looks like this could change drastically. Earlier this week, The Daily Mail reported that guests at Buckingham Palace have been warned about bringing up Prince Harry and Markle in front of the Queen. Her Majesty seems to be “hurt” by the couple’s recent attitude but it could also be she doesn’t want to give the negative press any more attention.