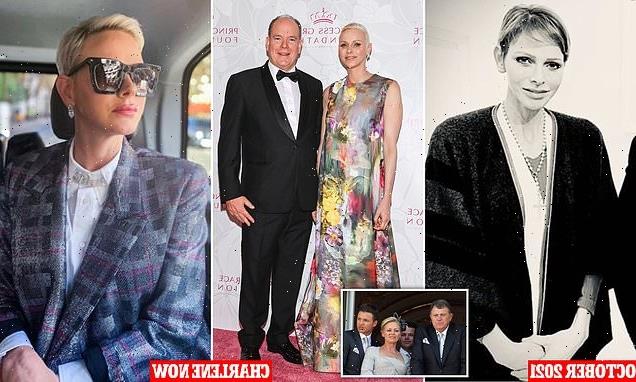 EXCLUSIVE: How Princess Charlene bounced back: Royal’s parents have moved from South Africa to Monaco to support her – and she’s turned to GOD to overcome a lengthy health battle and ‘marital problems’

As she approaches her 45th birthday this month, Princess Charlene of Monaco has every reason to describe her family as ‘my rock’.

Serious health problems have dogged the mother-of-two for the past two years, which saw her undergo multiple surgeries in South Africa during 10 months away from her husband and children, followed by a stint in a Swiss clinic for ‘exhaustion’.

However, after months of looked frail and pained, the royal is back to her glamorous best and is in the full swing of royal duties again, attending glitzy events such as the Princess Grace Awards in New York and the Monaco Grand Prix.

Now, sources say that the transformation is down to her increasing devotion to her Catholic faith, as well as the close proximity of her parents Lynette and Mike who have joined her brother in the principality from their native South Africa to support the Princess. 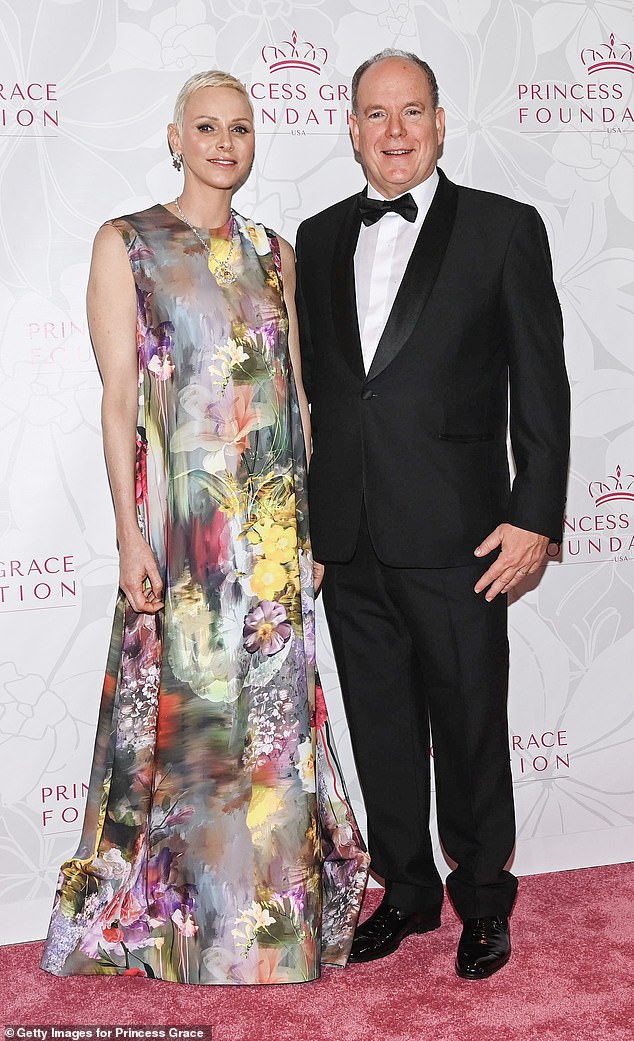 Princess Charlene, pictured with Prince LAbert at the 2022 Princess Grace Awards in November 2022, is back to her glamorous best after a lengthy health battle

Charlene’s tumultuous two years has seen her come to rely on those closest to her like never before.

‘My family and those I love are my rock,’ Charlene said in a rare interview over the New Year holiday.

‘I approach the future, step by step, one day at a time,’ added the Princess, as she sat in an ornate salon at the 862-room Monaco Palace, the House of Grimaldi’s official residence for almost 800 years.

Such words evoke the image of Prince Albert II, Charlene’s 64-year-old husband of 11 years and one of the richest Royals in the world, putting his considerable resources aiding Charlene back to full health. 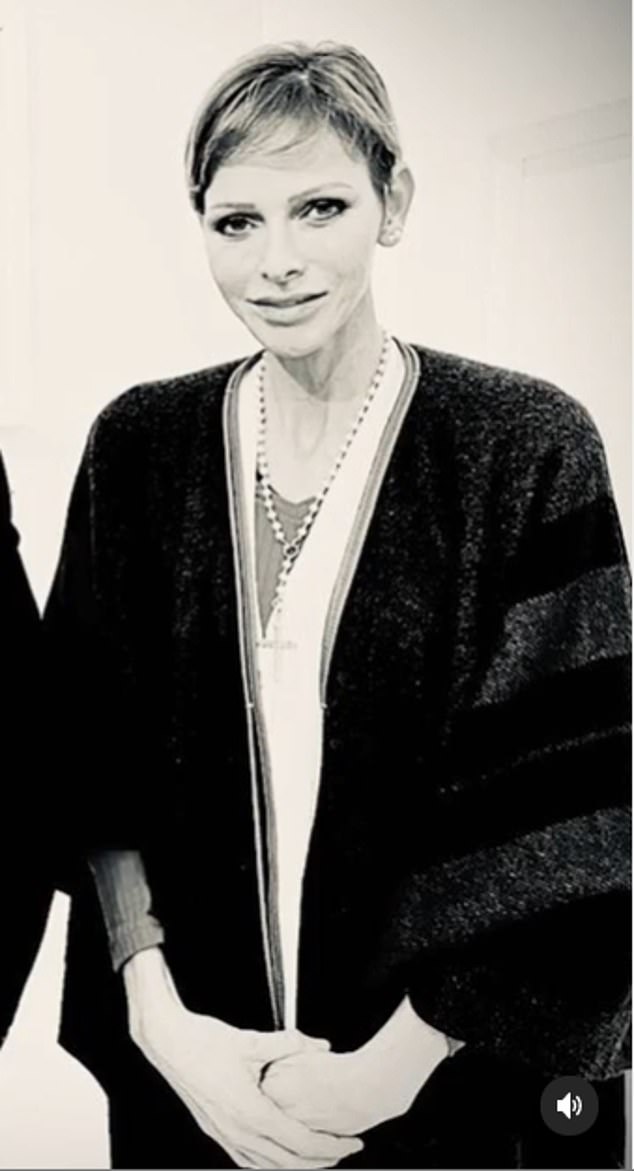 Except it is not Albert, nor indeed any other members of the Grimaldi clan, who are primarily responsible for Charlene now saying: ‘I would first like to say that I feel so much better today than I have in recent years’.

Instead, the miracle transformation that followed months of treatment for an Ear Nose and Throat condition in both her homeland of South Africa and then in Switzerland, is all down to her father, Mike Wittstock, 76, and mother, Lynette Wittstock, 63.

MailOnline can reveal that the couple have moved more than 8000 miles from their home in the suburbs of Johannesburg, to live permanently in the Monaco area. 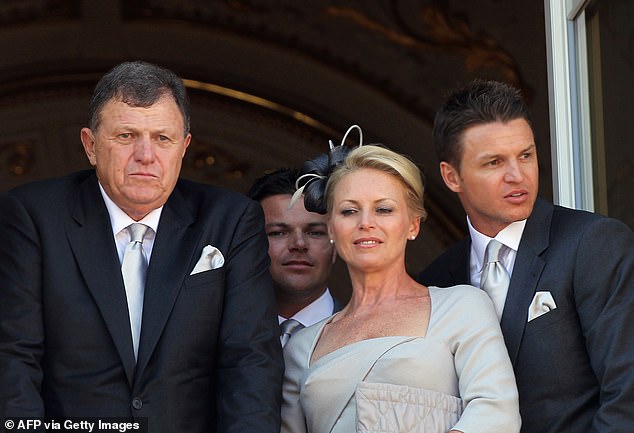 Princess Charlene’s parents Michale and Lynette Wittistock, pictured at their daughter’s wedding in 2011, have moved to Monaco to keep an eye on their daughter. her brother Gareth (right) made the same move 10 years ago, while her sibling Sean (back) is on the phone from South Africa every day to check on her 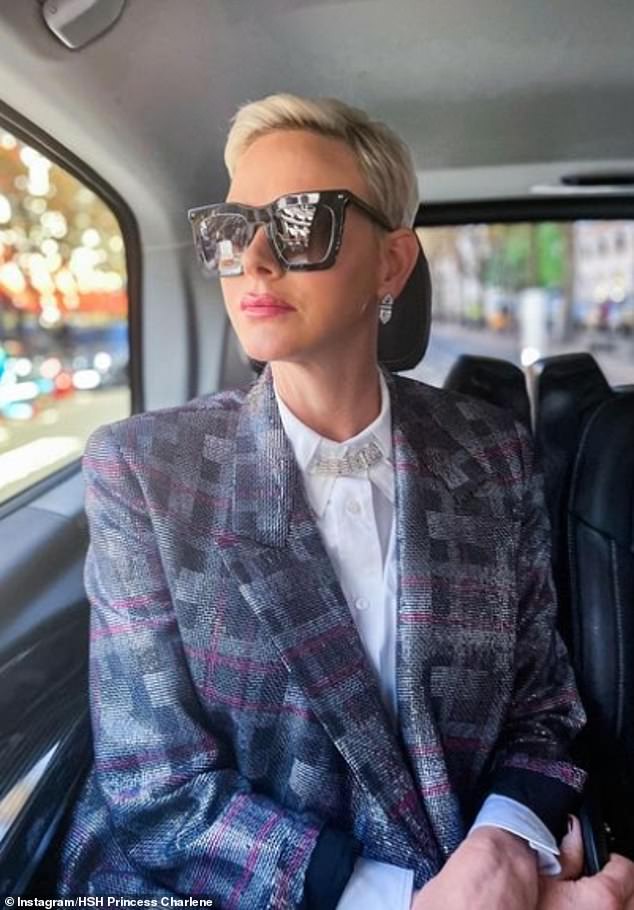 After spending time in a private clinic in Switzerland, Princess Charlene was the picture of health when she attended Paris Fashion Week

So as to be as close to their daughter as possible, they have moved into an imposing property in La Turbie, a French village next door to the tax haven principality where their daughter lives in regal splendour between a range of properties.

‘It has made the world of difference,’ said a palace source in Monte Carlo who has known Albert and Charlene since before their wedding.

‘The Wittstocks have moved into a house that’s just a few minutes’ drive away from Charlene, and they meet all the time.

‘They make her feel safe and secure, and remind her of the far more carefree life she enjoyed in South Africa before becoming a Monaco princess.’

Charlene’s brother, Gareth Wittstock, 42, first moved to Monaco to ‘make sure his sister was being looked after’ a decade ago, and her second brother, 40-year-old Sean Wittstock, is ‘on the phone every day from South Africa,’ said the source.

Some 45-year-old woman might feel a little suffocated having their original family unit so close to their new one, but for Charlene the new arrangement has worked wonders.

So too has her increasingly devout Roman Catholic faith – one that she converted to from Protestantism on marrying Albert in 2011.

Another Monaco-based source said: ‘Serious illness and other personal problems, including marital issues, have prompted Charlene to turn to God as much as she can. 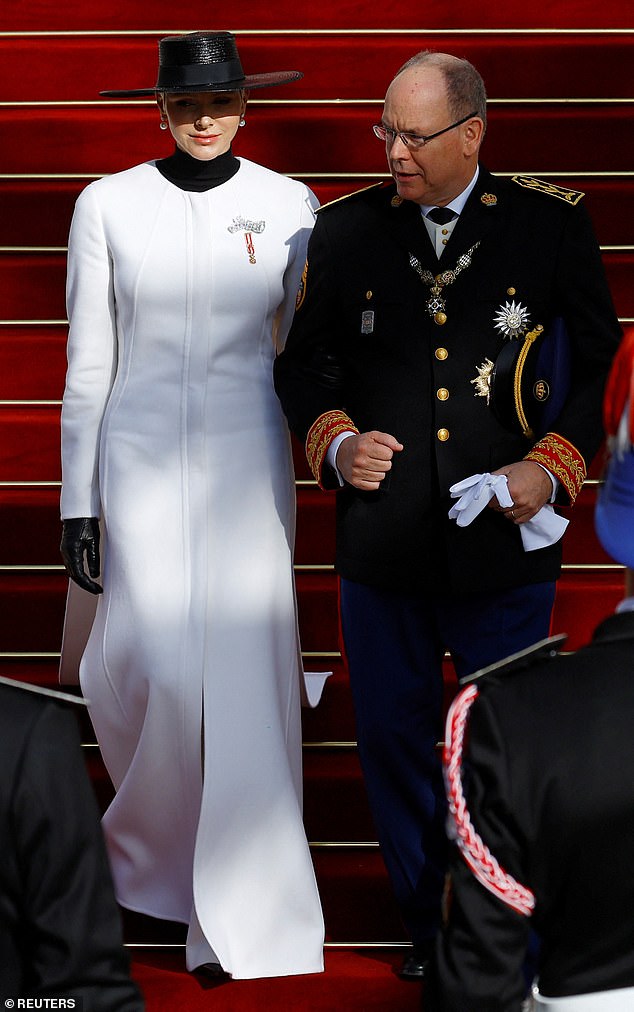 ‘She is inspired by Catholicism, and it has helped her through some very dark times.’

Charlene was particularly saddened by the sudden death of Archbishop Bernard Barsi, the Archbishop of Monaco, on Christmas Eve.

The 80-year-old cleric officiated at her wedding, and also baptised her eight-year-old twins, Prince Jacques and Princess Gabriella.

In a joint statement with her husband, Charlene said Archbishop Barsi had ‘accompanied the Sovereign Family, spiritually and pastorally, during the most significant moments in the Principality’s recent history’.

The Prince himself admits it has been a rough ride, saying over Christmas that there had been ‘tough years’ for Charlene.

‘I’m really proud of my wife,’ he said, recalling how the Princess first fell ill in May 2021 after returning alone to South Africa, and then required numerous surgical procedures.

Her return to Monaco was delayed until November 2021, and then she chose to recover privately in Switzerland, before re-joining her family in April 2022.

Now Charlene is returning to the official duties that the Prince is reportedly paying her the equivalent of £10million a year to fulfil.

A tumultous two years for Princess Charlene that saw her spend 10 months in South Africa away from her children, admitted to a treatment facility in Switzerland and strike a rumoured £10 million a year deal with Albert

2021: HEALTH ISSUES, 10 MONTHS IN SOUTH AFRICA AND ADMISSION TO A SWISS TREATMENT FACILITY

January 27 – Charlene is pictured with Albert for the Sainte Devote Ceremony in Monaco.

March 18 – Charlene is pictured at the memorial for the late Zulu monarch, King Goodwill Zwelithini at the KwaKhethomthandayo Royal Palace in Nongoma, South Africa

April 2 – Charlene posts an Instagram picture of herself, Albert and their twins Jacques and Gabriella for Easter from an unknown locatoin.

May 8 – Albert, Jacques and Gabriella attend a Grand Prix event in Monaco without Charlene

June 3 – New photos emerge of Charlene on her conservation trip

June 24 – Charlene’s foundation releases a statement saying the royal is unable to travel and is undergoing procedures for an ear, nose and throat infection

July 2 – Charlene and Albert mark their 10th anniversary separately. ‘This year will be the first time that I’m not with my husband on our anniversary in July, which is difficult, and it saddens me,’ Her Serene Highness Princess Charlene said in a statement.

August 13 – Charlene undergoes a four-hour operation. The reason is not announced

September 2 – Charlene is discharged, with a statement from the Palais Princier reading: ‘Her Highness is closely monitored by Her medical team who said that Her condition was not worrying’

November 8 – Charlene arrives back in Monaco. Prince Albert said within hours it became clear she was ‘unwell’

November 13 2021  – Prince Albert attends Expo 2020 in Dubai without Princess Charlene. Following his return from the trip, Prince Albert holds an intervention with Charlene’s brothers and a sister-in-law in which Charlene ‘confirmed’ she would seek ‘real medically-framed treatment’ outside of Monaco

November 25 – Sources tell Page Six Princess Charlene ‘almost died’ after sinus surgery and ‘lost nearly half her body weight’ due to being ‘unable to swallow’. They also said it was ‘unfair’ to portray her as struggling with mental health issues

January 25 – Princess Charlene celebrates her 44th birthday alone: Royal shares slideshow of snaps from happier times featuring Prince Albert, their children and her swimming career as she continues to receive treatment outside of Monaco

July 9 – Albert attends Monaco’s Rose Ball without his wife, despite it being the highlight of the social calendar

September 6 – Princess Charlene and Prince Albert of Monaco take their twins Jacques and Gabriella, 7, to class for their first day back after the summer holiday

December 23 – ‘Proud’ Prince Albert praises Princess Charlene for ‘turning it around in an incredible way’ after lengthy health crisis, saying she had a ‘very tough year’

In December, the former Olympic swimmer ventured to Fort Lauderdale, Florida, to open a new pool complex with Albert, and she is also a regular at charity events in Monaco itself, not least of all those connection with her Charlene of Monaco Foundation.

Well-connected sources told French media last year that ‘the Princess did not return [from treatment] at any price’.

Instead, the very well connected Voici magazine reported: ‘She would have had her husband sign an ultra-confidential contract’ worth £10.2million per year.

The revelations were followed up by the French society bible Paris Match, which wrote: ‘Prince Albert would himself pay a tidy sum to the princess so that she appears at his side at public events.’

Monaco Palace aides refused to discuss specific financial arrangements, but the principality pays out some £40m a year to cover the institution’s running costs.

Royals are not salaried officials, however, meaning that Charlene is reliant on Albert for her own money.

There have been reports of a simmering rift between the Prince and Princess pretty much constantly since their high-profile marriage on The Rock.

At the time, Charlene was dubbed the ‘Runaway Bride’ by the French media after allegedly trying to flee before the wedding, but the reports were always denied.

Albert was hit with a legal claim for cash by an alleged illegitimate child in December 2020, and soon afterwards Charlene shaved half her head in the style of a punk rocker.

There were allegations that Albert had fathered a love child with an unnamed Brazilian woman during the time when he and Charlene were already in a relationship.

The woman said she met the Prince in a nightclub in Rio de Janeiro in 2004, and that their daughter, who is now 18, sent a handwritten note to Albert.

In turn, Albert’s legal team branded the allegations ‘a hoax’, and they never went to court – prompting speculation that the case was settled privately.

The Prince has admitted fathering two other children out of wedlock – Jazmin Grace Grimaldi, who is now 30 and the result of Albert’s affair with an American estate agent, and Alexandre Coste, 19, whose mother is a former Togolese air hostess.

Both children were struck off Monaco’s line of succession in return for financial settlements.

As Charlene prepares to celebrate her 45th birthday on January 25th, she will be hoping that the turmoil behind such decisions will be well behind her, and that she can look forward to a secure family future.

A royal baby for Monaco? Grace Kelly’s granddaughter Charlotte Casiraghi is rumoured to be expecting her third child with husband Dimitri Rassam

Regal in red! Queen Letizia of Spain stuns in recycled crimson gown as she joins King Felipe to celebrate Epiphany Day on first royal engagement of 2023