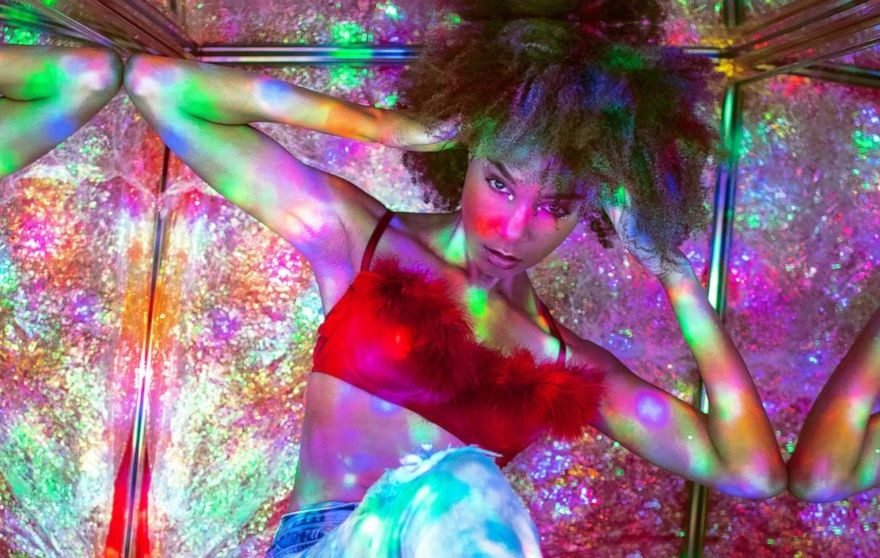 As a model, photographer and creative designer, she’s pursuing her dream of becoming a social media model and influencer, taking things up a notch with her unique DIY photo shoot sets.

Setting up a photo shoot at home instead of going to a studio has been something that Douglas has mastered. Her photos are shot with her own personal twist while saving hundreds of dollars on props and a professional photographer.

“Some of the ideas I come up with are really random,” Douglas told “Good Morning America.” “[A] majority of the time, I find a lot of stuff on Pinterest or recreate things and turn them into my own.”

Some of her experimental ideas involve using props that range from trampolines, to mirrors, to balloons. Douglas said that it can take anywhere from eight hours to an entire day to design and complete a set from ideation to execution, depending on the complexity of the shoot.

Douglas’s social media modeling journey started when she was 18 years old when she decided to take her own photos after not having the budget to pay a photographer.

“I’d reach out to photographers to get rates, do some test shoots and get a portfolio started,” Douglas said. “Most of them never responded or flaked on me. I was also a broke college student, so I really couldn’t afford to pay photographers anyways.”

As a result, she decided that she would build her portfolio by designing her own creative concepts, and operating both behind the camera and in front of it.

With social media becoming increasingly saturated with aspiring models, Douglas knew she had to come up with innovative and creative concepts to stand out and get noticed.

“It all started last year on New Year’s with me deleting all my photos on Instagram and Twitter, and just kind of resetting,” said Douglas. “One day, I taped my iPhone 5S to the ceiling, and took photos of myself and posted it on Twitter. Over the next couple days, it kind of went viral.”

The response overwhelmed her. Within a week, she’d gained nearly 10,000 new followers who admired her definitive method of shooting and editing photos. Since January 2019, she’s consistently posted on social media the behind-the scenes process of each shoot and averages thousands of likes on each. This consistency has grown her following from 9,000 followers in the beginning of January to almost 65,000 on Instagram.

As a result of her increased online presence, several brands have reached out to work with her and collaborate, and pay her to design creative campaign shoots for them.

Douglas has created and modeled in 90 of her own original photo shoot sets. All of them are posted on Instagram, where she gives a whole new meaning to the phrase “shoot your shot.”

“The goal is to make a living out of this and get more brands to notice me eventually,” said Douglas. “I do Postmates and Doordash to pay my bills, but it would be amazing if I could make this into a career, or got signed to an agency. Social media modeling is definitely what I want to do.”