The plan agreed to by national cabinet on Friday is not expected to derail proposed pilot schemes, with phase one expressly permitting “commercial trials for limited entry of student and economic visa holders”. 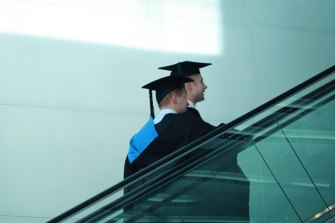 Universities have called for more clarity on how the new arrivals caps will impact pilot programs to return international students.Credit:Louise Kennerley

But it is unclear how the state will move to ramp up its intake of students in line with the halving of international arrivals from July 14, and the cap on students visa holders proposed in the later stages of the reopening roadmap.

Ms Berejiklian said on Saturday there was a “huge question mark” over what impact the new measures – as well as Sydney’s COVID-19 outbreak – would have on the state’s ability to return international students to NSW campuses as planned.

“It causes us to reconsider all of those things. The other states have clearly indicated they don’t want to continue to welcome Australians in the number we had,” Ms Berejiklian said.

“So I think it does put a huge question mark over those plans.”

NSW is expecting to soon receive federal government approval on Treasurer Dominic Perrottet’s plan to bring 250 students into the state every fortnight on charter flights before quarantining in special accommodation. The South Australian government was given approval for a similar pilot program last month.

In Victoria, however, the government is yet to put in place a specific plan to fly international students into the state.

Phil Honeywood, chief executive of the International Education Association of Australia, said the Victorian government had dragged its feet on submitting a detailed proposal.

“I’m particularly concerned because for Victoria, international education is our biggest industry,” he said of the $13.7 billion sector.

A spokesman said the Victorian government submitted a draft plan to the federal government in mid-June.

“The draft plan is a detailed document that outlines how Victoria will facilitate the arrival of international students in a safe and measured way,” he said.

Vicki Thomson, chief executive of the elite Group of Eight universities lobby, which includes the universities of Sydney, UNSW, Melbourne and Monash, welcomed the commitment to include the pilots in the current phase. But she said key details, such as timelines and the number of capped places for student arrivals, was needed.

“It seems likely that we may not see significant international student numbers returning to Australia until well into 2022, which is not unexpected but still sobering for the sector – notwithstanding our first priority of keeping Australians safe.”

Under the first phase, from July 14 the number of international arrivals permitted into Australia on commercial flights will be halved in a bid to relieve pressure on the hotel quarantine system.

The second and third phases of the roadmap, which will only kick in when a specific target of vaccinations has been reached, will allow the capped entry of student and economic visa holders. Vaccination targets are not yet specified but will be based on medical advice.

Luke Sheehy, the executive director of the Australian Technology Network of Universities, said international students were growing increasingly frustrated by Australia’s “hot and cold” position on reopening the borders for study.

“There is a worry within the international student community that Australia sees them only as cash cows and we are not particularly welcoming,” Mr Sheehy said.

But he said the university sector had to be pragmatic about the health fears of state and federal governments.

“We are seeing breaches of hotel quarantine, it is a concern for them and if we can’t have confidence in our own abilities to deal with the virus then of course we are not going to feel confident about bringing international students back.”

NSW Vice-Chancellors’ Committee convenor Professor Barney Glover said NSW universities were continuing to “work closely and constructively” with both the Berejiklian and Morrison governments on the plan for the safe return of international students to Australia.