Suspected visa scams have brought up to 100,000 workers into Australia using false claims that have choked the system, fuelling fears about illicit labour as the government launches a sweeping review of the migration regime.

The schemes have left Australia with a growing underclass of workers who are waiting on a legal system that takes 812 days on average to decide each case, according to a new warning about labour trafficking. 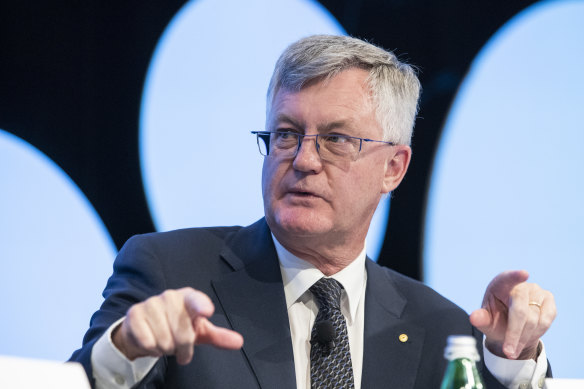 Former head of the Treasury Martin Parkinson will lead a review of the visa system, with another review to look at migration scams.Credit:Louie Douvis

The federal government has cleared the way for an overhaul of the visa rules by naming former Treasury secretary Martin Parkinson to review the system, but a second inquiry is being prepared to investigate the migration scams.

Parkinson said it was “indisputable” the migration system was not working.

Official figures show about 40,000 people have arrived at Australian airports and sought to stay but are waiting two years for decisions at the Administrative Appeals Tribunal after having their initial claims rejected.

Another 32,000 have had their claims rejected at the tribunal but remain in Australia, sometimes because they cannot be found and deported, according to an analysis by former immigration department deputy secretary Abul Rizvi.

A further 27,000 people are in Australia after arriving at airports and claiming asylum in a trend that has seen an increase in “unmeritorious” claims from people using tourist visas to come from countries including Malaysia, China and India.

The government reviews follow a major investigation by The Age, The Sydney Morning Herald and 60 Minutes into allegations of widespread visa rorting linked to sex trafficking, drug crimes and the exploitation of foreign workers.

“The Trafficked investigation highlights the case of one migration agent who has been involved in around 150 bogus asylum applications,” he said.

“But with almost 100,000 bogus asylum cases lodged since 2014, there would have to be hundreds of such agents operating in Australia, with some lodging possibly thousands of applications.

“Stories of unscrupulous migration agents are not new. What is new is the industrial scale at which this is now taking place and the extraordinary number of unsuccessful asylum seekers now living in the shadows of Australian society.”

The migration schemes encourage people to fly to Australia on tourist visas, claim asylum upon arrival and work while their claims are processed, leaving them exposed to exploitation because they have no work rights.

Migrant Workers Centre chief Matthew Kunkel, who acts for exploited workers, said it was impossible to be sure of the number in the country because it was “difficult to count what you can’t see” in a visa system that left people in legal limbo.

“There is a real failure of regulation, so more needs to be done to drive out the bad actors who prey on people and their hopes,” he said.

“And we need a system where you don’t wait for two years for a decision.”

A report by the Migrant Workers Centre in September, called “Lives in Limbo”, found 65 per cent of workers on temporary visas suffered from wage theft.

The Asylum Seeker Resource Centre said unscrupulous agents were a symptom of a bigger problem with the “complete dismantling” of the refugee processing system and lack of funding at the Administrative Appeals Tribunal.

“One particularly pernicious change was defunding legal aid for people applying for protection, which in some cases has left a vacuum for bad actors,” the centre said.

Giles cited the Trafficked investigation to blame the former Coalition government for running down the visa system to the point where it was being “exploited time and time again by unscrupulous operators and people traffickers”.

Rizvi based his estimate of 100,000 workers based on figures from the Department of Home Affairs and the Administrative Appeals Tribunal showing the number of rejected claims from people who remain in the country.