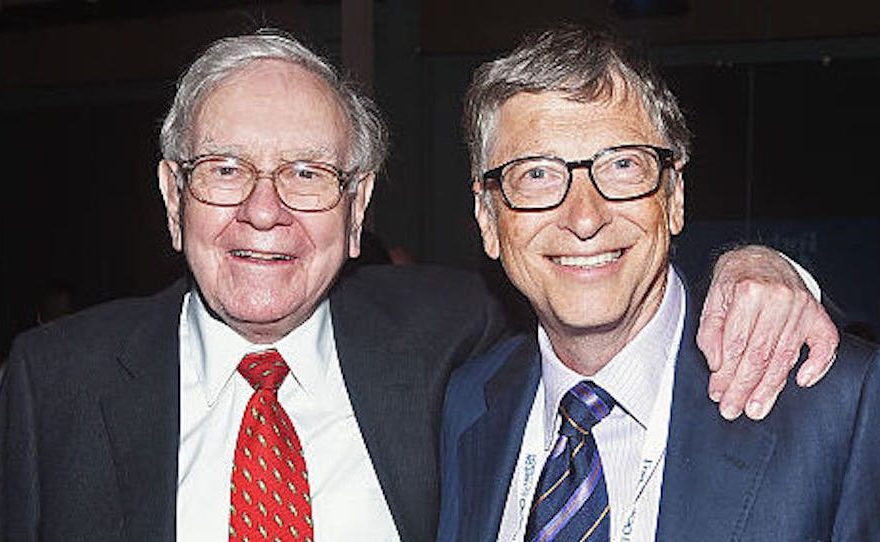 Bill Gates and Warren Buffett are the second- and sixth-wealthiest people in the US, per Bloomberg Billionaires Index. They also happen to be best friends.

But when they met 29 years ago, it was grudgingly. Each one was surprised at how much he enjoyed talking to the other.

Since then, they've been a tag team on political and philanthropic causes as well as mutual mentors. Plus, they love goofing off together.

Below, we've collected some highlights of their relationship.

Warren Buffett turned 90 on August 30th. His friend Bill Gates marked the occasion by sharing a video of himself baking an Oreo birthday cake, set to the tune of the Randy Newman classic, "You've Got A Friend In Me." 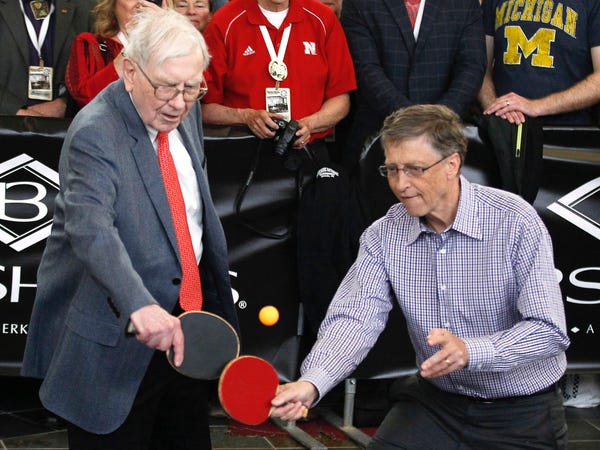 It was a deliberate food choice — Oreos are Buffett's favorite dessert. In a 2016 blog post, Gates wrote that he once caught his famous friend eating them for breakfast.

Gates, 64, is the second-richest person in the world. He's the former CEO of Microsoft and the cofounder of the Bill and Melinda Gates Foundation. 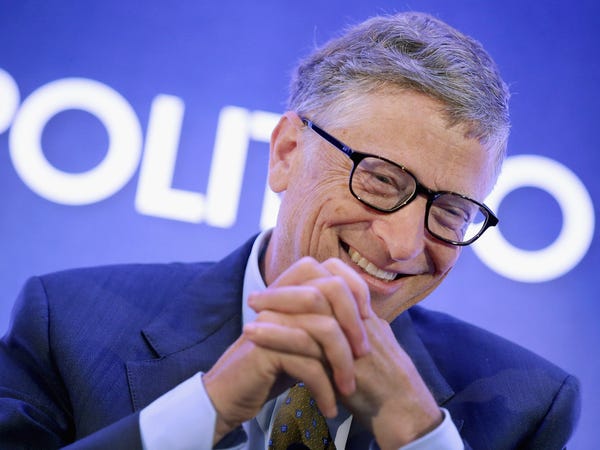 Buffett, 90, is the sixth-richest person in the world. He's a legendary investor and the CEO of Berkshire Hathaway. 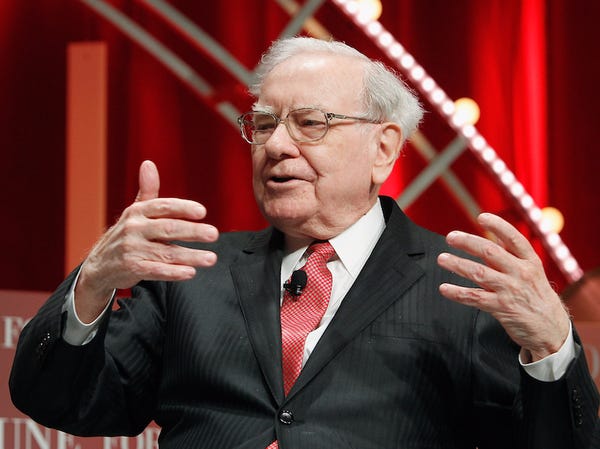 Gates' and Buffett's friendship dates back to July 5, 1991. Gates' mother, Mary, had invited the late Meg Greenfield, a Washington Post editor, to her home. Greenfield was to bring her friend Buffett with her. 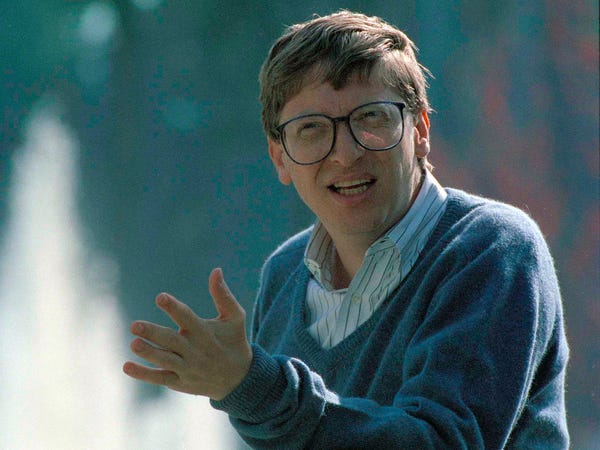 Mary Gates pressed her son to join them — he didn't want to take the day off work. "What were he and I supposed to talk about, P/E ratios?" Gates later wrote. The only reason he decided to come was because Greenfield was also bringing the late Post publisher Katharine Graham and he was interested in the Post's history. 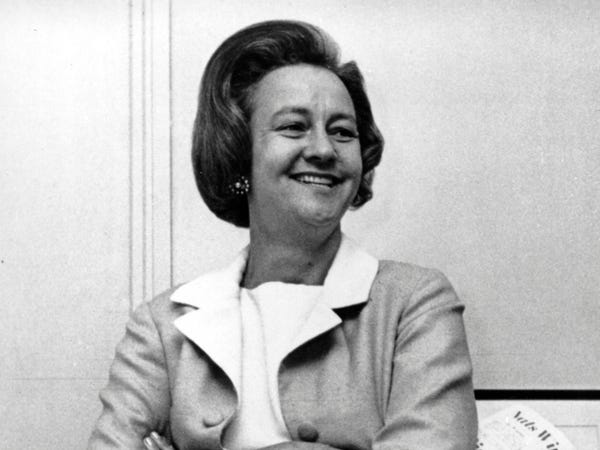 Buffett didn't particularly want to meet Gates, either. "While we're driving down there, I said, 'What the hell are we going to spend all day doing with these people? How long do we have to stay to be polite?" Buffett remembered years later. 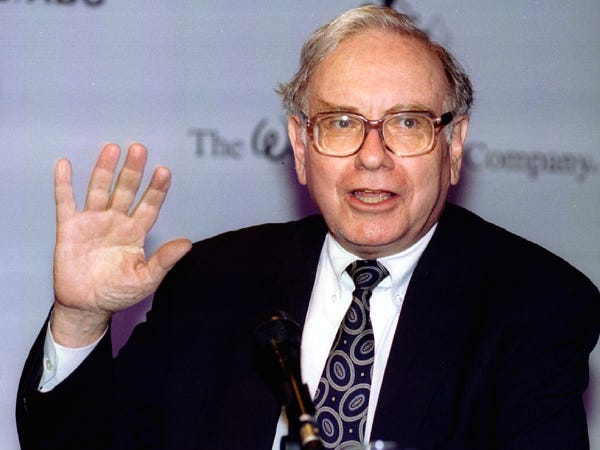 To the surprise of both men, they hit it off. Gates recalls being impressed by the questions Buffett asked him, like, "If you were building IBM from scratch, how would it look different?" And Gates told Buffett to buy stock in Intel and Microsoft. It was the beginning of a deep friendship and a mutual mentorship. 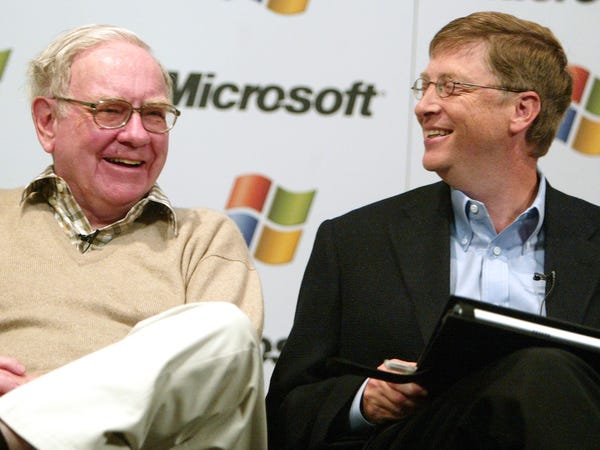 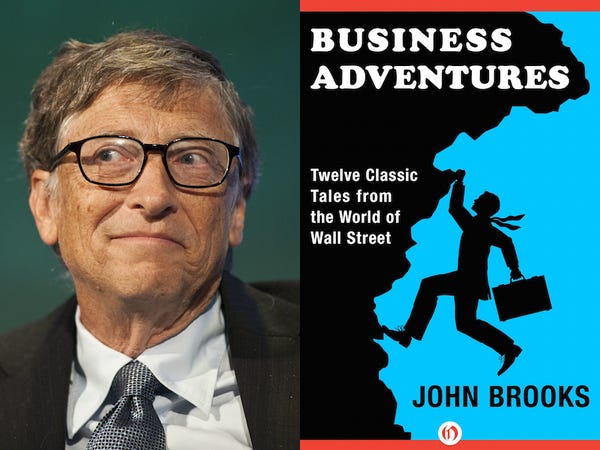 Both credit their tremendous success to their laser focus. Gates has written that he's learned from Buffett how to manage his time by prioritizing certain people and tasks. 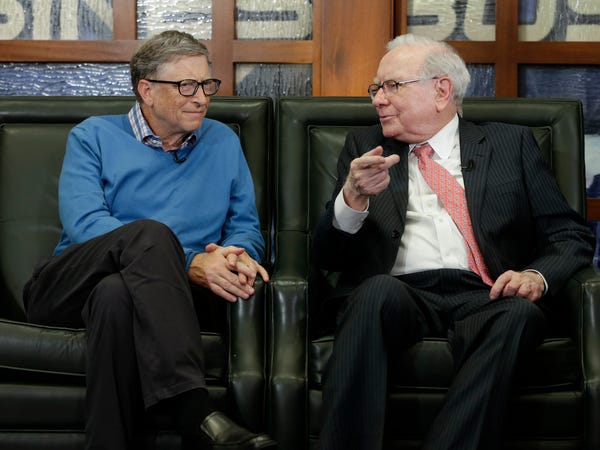 They've often joined forces for political and philanthropic causes. In 2010, Gates and Buffett, along with Gates' wife, Melinda, started The Giving Pledge. Billionaires who sign up commit to giving away more than half their wealth. 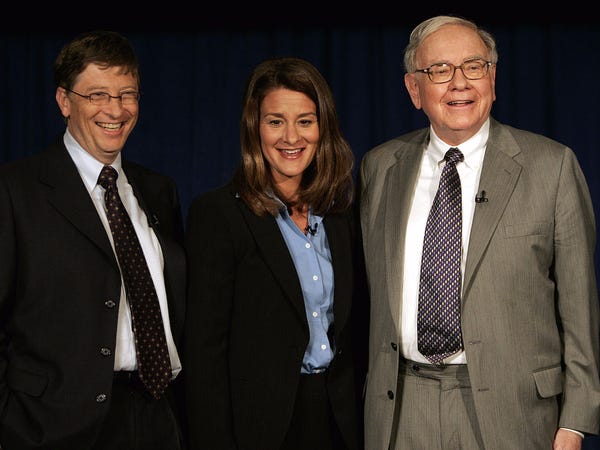 In fact, Buffett contributes part of his fortune to the Bill and Melinda Gates Foundation every year. In July 2019, he donated $2.9 billion in Berkshire Hathaway stocks to the Gates Foundation and four other charities. 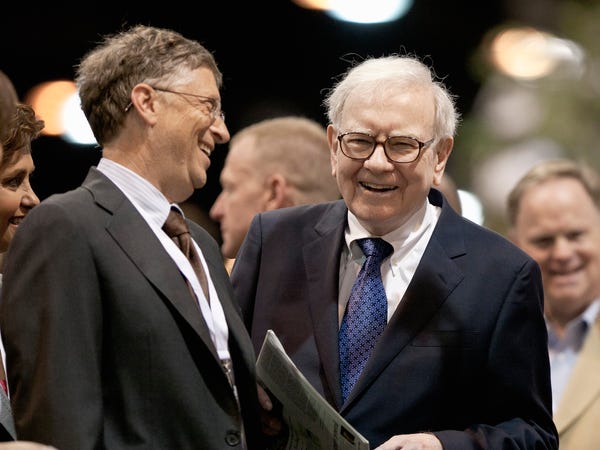 In 2014, Gates and Buffett, along with Sheldon Adelson, published a New York Times op-ed pushing for immigration reform. 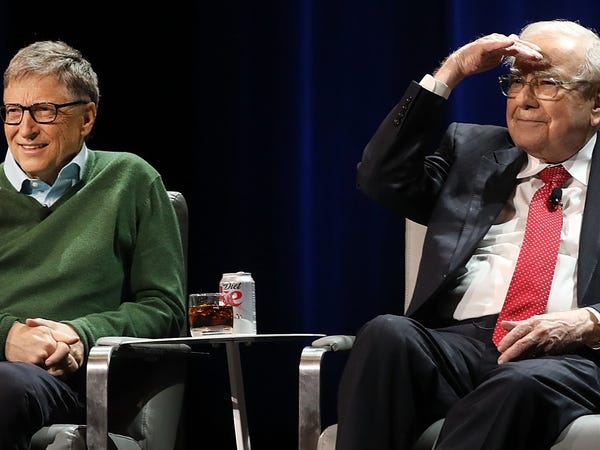 During the coronavirus pandemic, Buffett called Gates his "science advisor." In February 2020, the Bill and Melinda Gates Foundation pledged $100 million to fight the pandemic. 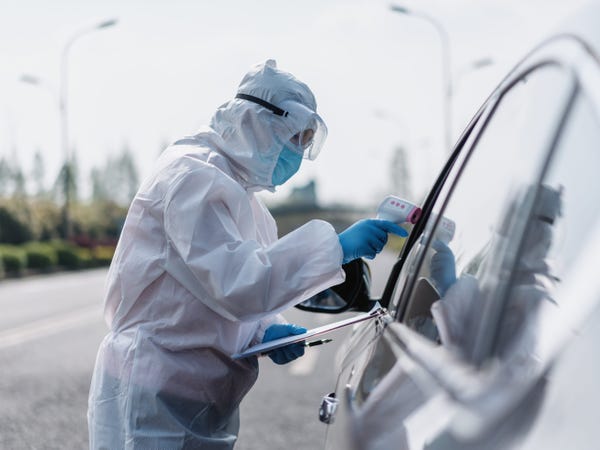 In July 2020, Gates told Yahoo's Andy Serwer, "Warren and [Gates] are talking on a more regular basis than ever" about the economy and businesses during the pandemic. The same week, Buffett told Serwer that they schedule a weekly hour-long call but they usually exceed that time limit. 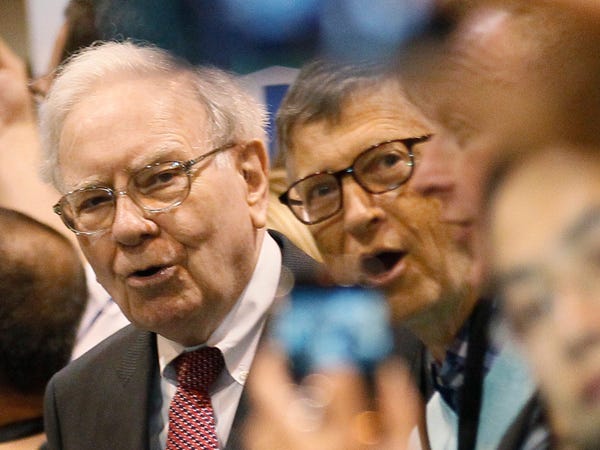 The friends also have some unusual pastimes. They participate in the newspaper-tossing challenge at the annual Berkshire Hathaway meeting. The popular tradition is a nod to a gig Buffett as a teenager delivering Washington Post newspapers. 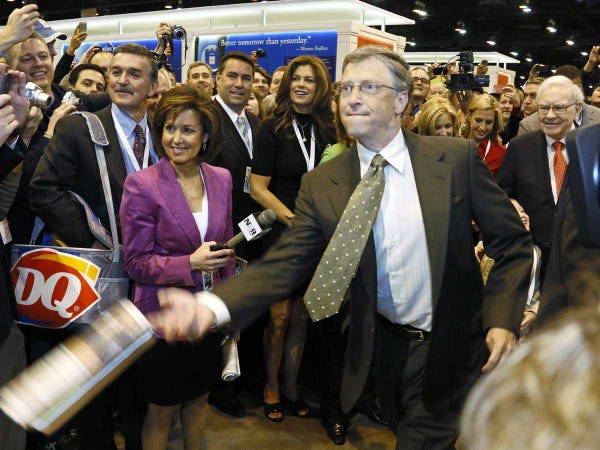 In 2017 they learned that they like trying out mattresses together. 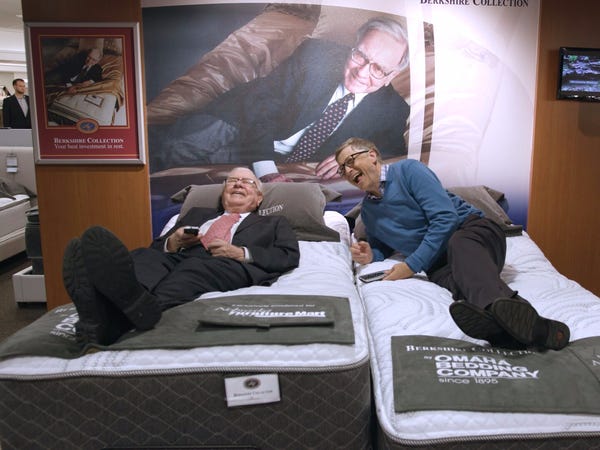 Gates has said Buffett's number is one of just two he has on speed dial at the Bill and Melinda Gates Foundation. His home phone occupies the other spot. 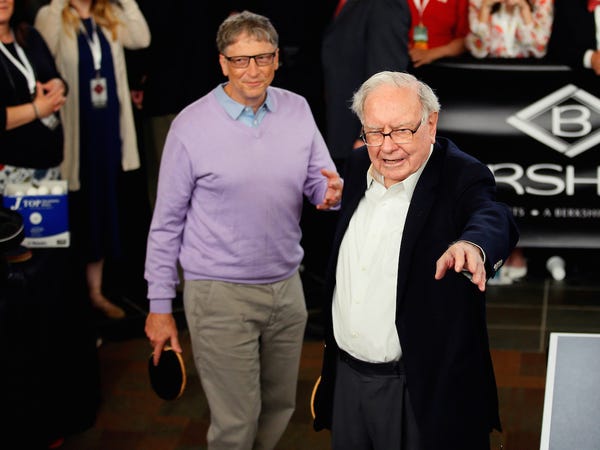 The friendship has made a big impact on both men. In 2016 Gates wrote that "Warren has helped us [Bill and Melinda] do two things that are impossible to overdo in one lifetime: learn more and laugh more." 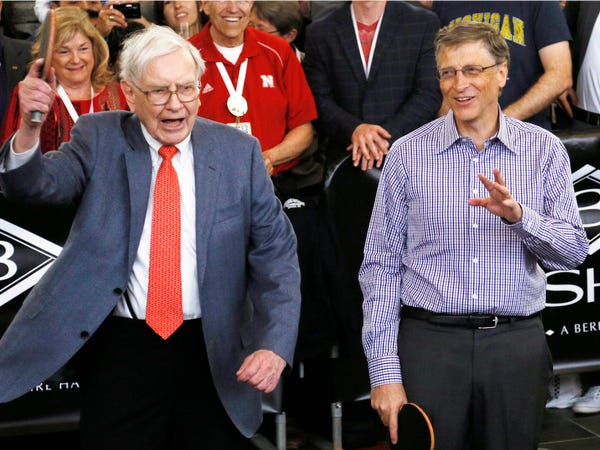 In his August 2020 blog post dedicated to Buffett's 90th birthday, Gates wrote that Buffett has "a phenomenal eye for talent" and "works incredibly hard" while leaving room for life outside the board room. "Of all the things I've learned from Warren, the most important thing might be what friendship is all about," he added. 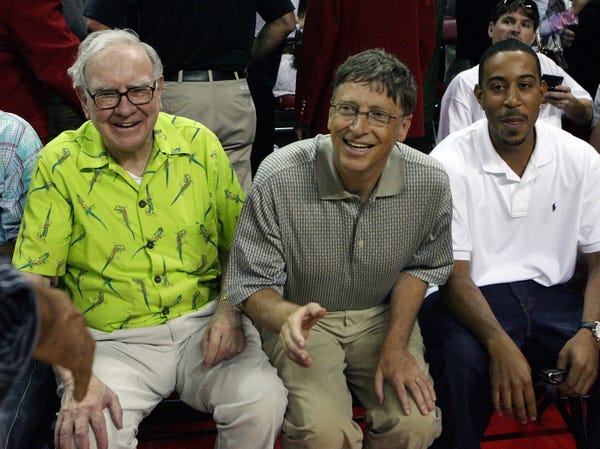