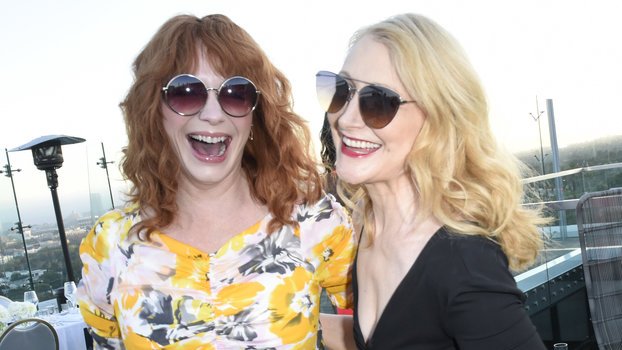 How do you celebrate ninety years of style? For sunglass company Foster Grant, the answer was clear — to honor some of the most influential and badass women of Hollywood. In partnership with InStyle, the brand hosted an intimate dinner set on the rooftop of The London West Hollywood at Beverly Hills Hotel. As the sun started to set, invitees such as Christina Hendricks, Allison Janney, Hunter Schafer, Jenni Konner, Jameela Jamil, Linda Cardellini, and more grabbed cocktails, hugged, and enjoyed dazzling views of the city before sitting down with the other attendees, brand ambassadors, and social good entrepreneurs.

“I think anyone wearing sunglasses feels like a celebrity,” said Patricia Clarkson as she mingled over cocktails before dinner. “Sunglasses are just sexy, you know? And they always will be. Sometimes when we're feeling a little tired, we put on sunglasses and suddenly we're glamorous.”

Which may be why, once upon a time, sunglasses were the mark of celebrity. Stars like Audrey Hepburn made sunglass looks iconic, and in the years following, hundreds of paparazzi photos have captured celebrities on their days off, rarely without their favorite pair of shades.

It’s a sentiment Sophia Bush agrees with, stating, “I just love sunglasses in general. I'm a bit of an addict. I have more pairs than I care to admit!”

Foster Grant calls themselves ‘The Original American Sunglasses Brand’ and has been providing quality sunglasses and reader glasses at an affordable price since 1919. With each passing decade, the brand creates new styles to match the era. Sunglasses celebrating each decade were on display and in gift bags for all attendees to take home.

“I'm not good with them,” Sutton Foster says of the accessory. “I do try to up my sunglasses game, even though every time I buy an expensive pair, I lose them. And when I buy the cheap pairs, they scratch up.”

“I just lost my sunglass case today and my sunglasses are like, at the bottom of my tote,” she added with a shrug and a smile.

Meanwhile Allison Janney, who admits to not being able to wear sunglasses as much as she’d like, believes that “everyone feels like a celebrity when they first put on sunglasses.”

“I think the privacy they offer are why they are still the staple of the celebrity,” says Jameela Jamil matter-of-factly, adding, “but everyone could wear them and they should. However, I personally avoid wearing them at night so that I don't look like an asshole.”