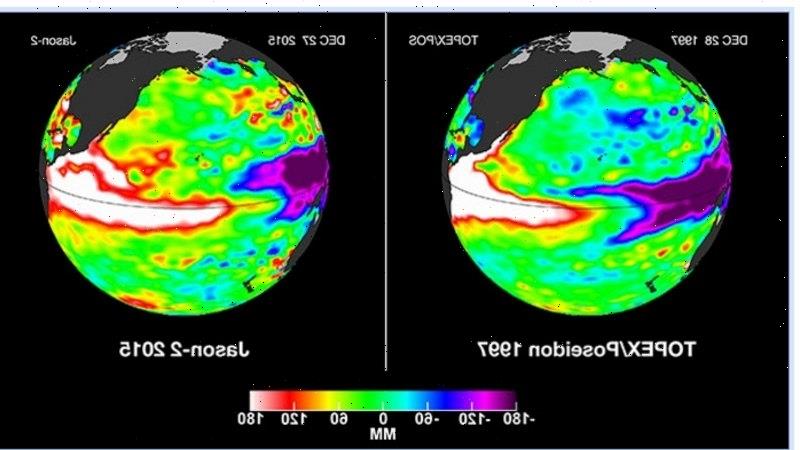 Australian scientists have challenged the latest UN-backed global warming report, saying it underestimated the likelihood major weather events driven by processes in the Pacific will become more extreme as the planet heats.

Research published in Nature Reviews journal just days after this month’s release of the Intergovernmental Panel on Climate Change report found the latest models show the frequency and ferocity of El Nino and La Nina events will increase this century. 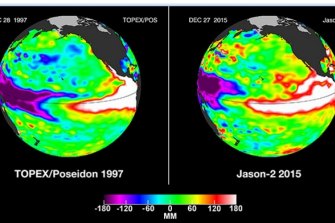 Two big El Ninos, forming in 1997 and 2015 in the Pacific. The climate patterns swing between periods of lower activity to more active ones, with global consequences.Credit:NASA

The results also argued that events based on extreme sea-surface temperatures had increased during the past 60 years compared with the 1901-60 period, and large so-called El Nino-Southern Oscillation (ENSO) events since the mid-20th century were larger than any time during the past few centuries.

Those findings, though, were at odds with the IPCC report, which argued there was a “medium confidence” that “there is no model consensus for a systematic change in intensity of ENSO sea surface temperature variability over the 21st century in any of the [carbon emissions] scenarios assessed”.

The IPCC’s verdict surprised the paper’s lead authors, Wenju Cai from the CSIRO, and Agus Santoso, a climate researcher based at the University of NSW. While their paper missed the January cut-off to be considered by the IPCC for its report, it was based on model data already available for IPCC reviewers.

“Most of the models are showing sea-surface temperature variability” as a driver of future extreme events, Dr Cai said. “I don’t know how they missed it.”

Dr Santoso said: “It’s quite surprising to me as well,” and “monster El Ninos will start appearing”.

Understanding how El Ninos and La Ninas will change in a warming world will be vital. Although the weather patterns emanate in the Pacific, they have global impacts, ranging from droughts and bad bushfire seasons in Australia, to altered rainfall patterns in California and the Brazilian Amazon.

The Nature Reviews paper said the latest models indicate the frequency of El Niño events with extreme rainfall impacts to double from about one event per 20 years from 1890–1990 to one every decade during 1990–2090 even assuming global mean temperature rises stabilise at 1.5-2 degrees above pre-industrial levels.

John Fyfe, a lead author of the IPCC’s section on ENSO and a research scientist at the Canadian Centre for Climate Modelling and Analysis, said the new paper was “a very welcome contribution to the understanding of projected changes in extreme sea surface temperature and rainfall fluctuations in the tropical Pacific”.

Professor Fyfe, though, said the magnitude and significance of projected changes can depend on the comparison period. The IPCC looked at 2081-2100 against 1995-2014 while the Nature paper compared the 21st century against the 20th. “For this reason, the two approaches have come to somewhat different conclusions,” he said.

Dr Cai, though, said it was baffling such a short period was used. “It’s not appropriate to use 20 years as your baseline,” he said, noting it can make a big difference which decade is used for comparison.

Dietmar Dommenget, an associate professor at Monash University’s School of Earth Atmosphere and Environment, said the IPCC’s short comparison period was “problematic”. The 1995-2014 period was within two years either side of big El Nino or La Nina events, so a minor shift would produce a different result, he said.

Professor Dommenget, though, noted that both the research paper and IPCC study identified a warming influence on rainfall patterns even if there remains greater uncertainty over how sea-surface temperatures might affect the intensity of the major weather events.

Professor Fyfe said the increase in ENSO amplitude because of human activities had yet to be identified in observations. “Everything we are talking about here is in ‘model world’,” he said. “This is acknowledged in the IPCC report and in [Dr Cai’s paper].”

Liam Mannix’s Examine newsletter explains and analyses science with a rigorous focus on the evidence. Sign up to get it each week.