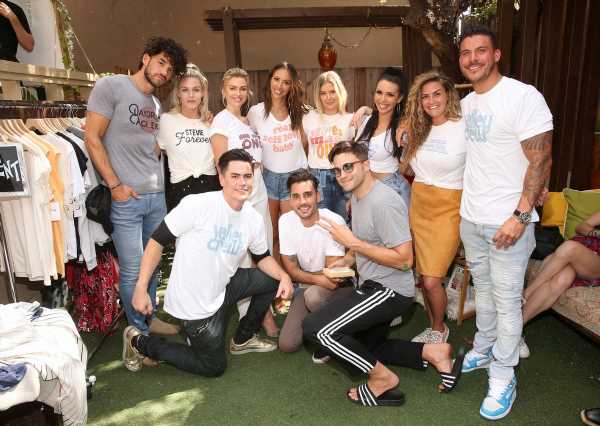 Vanderpump Rules Season 8 is shaping up to be a Sexy Unique Doozy. As outlets like Hollywood Life, E! News, OK!, Reality Blurb, and Us Weekly recently reported, Jax Taylor apparently unfollowed Vanderpump Rules costars Ariana Madix, Tom Sandoval, Kristen Doute, and Scheana Shay on Instagram. Ariana, Sandoval, and Kristen do not follow Jax, but Scheana currently does. While it’s unclear when the unfollowings happened, and it’s also unknown who smashed the unfollow button first, but when Season 8 eventually premieres, we will (hopefully) get a glimpse into what led to this follow fall-out.

Season 8 filming has officially wrapped, but as any true Pump fiend knows, the drama rages on with or without the cameras, and this post-season seems to be no exception. Last Monday, the cast gathered at Tom Tom to celebrate the restaurant’s first anniversary, and the event that will presumably be featured in the season finale. Less than a week after Season 8 finished filming, fans noticed Ariana, Sandoval, and Kristen are not friends with Jax on IG anymore. Jax’s wife Brittany Cartwright still follows Kristen, Sandoval, Ariana, and Scheana, and vice versa.

So what happened with Jax, one of his best men, and three of Brittany’s bridesmaids? Suppose we will have to wait until the upcoming season airs. Bravo has not officially announced a premiere date for Season 8, but the show usually starts around the beginning of December. So, we’ll just have to sit tight until then. If you really can’t wait that long, first of all, that is totally understandable. Don’t worry, there are tons of rumors and theories and spoilers over on Reddit that can hold you over until the show returns.

Holy Giggy, is this shaping to be a tumultuous season. As if Jax severing social media ties with some of his costars was not enough to chew on, we’ve got the Witches of Weho drama to parse. As several sites have reported, Kristen Doute’s apparently on the outs with her (former?) besties Katie Maloney and Stassi Schroeder— so much so, she did not attend Stassi and Beau Clark’s engagement party. That is major for, like, 10 billion different reasons, one of which being she was one of the people who introduced Beau and Stassi. Suffice to say, her absence speaks volumes.

So what happened? Again, we will just have to wait (or turn to Reddit). But uh, whatever happened, it sounds like it was not the most pleasant of experiences. On the Aug. 9 episode of the Straight Up with Stassi podcast, Stassi and Beau got into just how draining Season 8 was for her. "We’re at the home stretch of filming," she said. "I have a few days left, my brain is mush, my emotions are shot, I have no energy … The drama is killing me. I can’t anymore. I can’t talk about this sh*t anymore. I don’t even even know how to do a podcast because I’m literally dead inside."