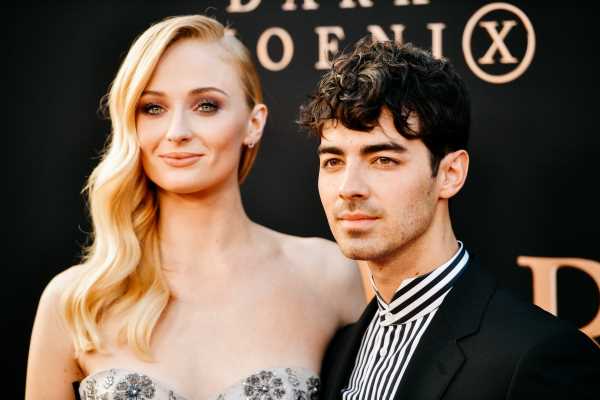 The loss of a furry pal is every pet parent’s worst nightmare. On the heels of their recent loss, Joe Jonas and Sophie Turner got matching tattoos of their late dog, Waldo. The newlyweds took to social media on July 29 to share pictures of their new ink that features the couple’s late Alaskan Klee Kai dog Waldo. The pup died after he was struck by a car in New York City on Wednesday, July 24. On Instagram, Jonas captioned the picture of his black-and-white tattoo of Waldo with his tongue out, “R.I.P. my little angel.” Meanwhile, on her Instagram Story, Turner captioned the photo of her tattoo, “I miss you, Waldo. Rest in peace my little baby.”

According to a report from TMZ, Waldo broke free from his leash after he was "spooked by a pedestrian" on the Lower East Side of Manhattan and “ran into the street and was struck by a vehicle.” Jonas’ rep called the sad incident a “freak accident.” As per People, Jonas adopted Waldo in April 2018 as a surprise gift to his then-fiancé prior to their June nuptials. Waldo marked the couple’s second dog together. They adopted Porky, also an Alaskan Klee Kai breed, in 2017.

TMZ also reported that Jonas and Turner filed a police report on Friday, July 26. The couple reportedly experienced a delay in reporting because they were too distraught. In an initial statement obtained by Bustle, the NYPD confirmed the July 24 accident but did not confirm whether the dog belonged to the newlyweds. “A police report was filed for a motor vehicle collision involving a dog struck at Bowery & Broome Street, within the confines of the 5th Precinct,” the NYPD said in a statement. “On Friday, July 26, 2019, a female complainant filed a report stating, on Wednesday, July, 24, 2019 at approximately 2335 hours, a vehicle struck the dog, did not stop and left the scene. The dog was brought to the hospital where the dog later died. There is no vehicle or driver description.”

The statement continued, “We cannot confirm names of the person filing the report nor can we confirm the owners of the dog. No further information is available.”

A day after the accident, Jonas and Turner were spotted in NYC walking Waldo’s brother Porky. As per People, the Game of Thrones alum held a leashed Porky in her arms with husband Joe nearby. As reported by several outlets, Porky was also on hand to celebrate Jonas and Turner’s second wedding ceremony in France in June. At the wedding, Porky donned a pup-sized tuxedo and served as one of Jonas’ groomsmen — much to the delight of many.

In an interview with People in November 2018, Jonas gushed about his two pups and revealed that they lived a “pretty fabulous life” as jet-setters. “They’ve been to France, Amsterdam, London… countryside of England, Canada,” he said of the dogs, who have also visited Turner on the Game of Thrones set and toured with the Jonas Brothers musician. “They probably travel more than most of my friends.”

As any pet parent who has lost a furry friend will know, the loss of a pet can be incredibly devastating. Jonas and Turner’s matching tattoos serve as such sweet tributes to Waldo’s memory.