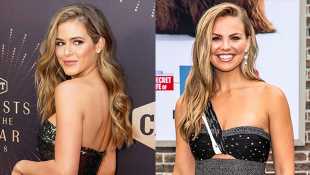 From one Bachelorette to another, JoJo Fletcher is complimenting Hannah B. ahead of her major season finale, in an EXCLUSIVE interview with HL!

Ahead of Hannah Brown‘s big night, former Bachelorette JoJo Fletcher is praising The Bachelorette star for how she handled herself this season. In a podcast interview with HollywoodLife.com, JoJo gushed over Hannah’s honesty and realness, especially when it came to the hot topic of sex this season (which was almost every episode). “This is a crazy season, my goodness. It’s so different,” JoJo explained. “It’s a lot racier, but it’s also not racier because Hannah is more honest about it, which is hard to do. It’s really hard to be that honest in that situation and she’s done that. She’s just owned everything and that’s really cool.”

JoJo, whose heart was won over by her now-fiancé Jordan Rodgers in season 12 of The Bachelorette, admitted that she hasn’t been able to watch too much of Hannah’s season, as she and Jordan were filming their own CNBC show, Cash Pad! However, that might have been for the best, because she revealed she “probably would’ve died” having to see “the Luke show” every week. “I’m tired of talking about Luke. I think everyone knows he’s so in the wrong, in so many freaking ways. No one should tell women what to do with their brain. No one should slut shame,” JoJo continued. “When I was watching Men Tell All, there was a point where I felt like grace has to be given on both sides. He has to know deep down that he is doing this all wrong, and he’s not looking good. He’s going to deal with that on his own, at the end of the day, and he has gotten it. Just grow from this.”

While we don’t know what will happen between Hannah B. and her suitors ahead of tonight’s Bachelorette finale, we hope she feels the same as JoJo about the experience, who said that it “was the greatest experience in my life.” “When I was on The Bachelor and I had my heart totally smashed and broken, it was still one of the greatest experiences of my life. . Whether or not you meet someone, you grow exceptionally from this whole thing. Luke is going to grow so much from this,” she explained.

Now, JoJo and Jordan are happily planning their wedding for next spring in California, after 3 years of being engaged. The couple is also starring in their own show Cash Pad, in which they invest and remodel short-term rental properties. “We want ya’ll to see the bad, not so perfect moments, because that’s what makes us more real!” JoJo explained about showing their relationship on TV once more. “I wish we would’ve argued a little more!” Jordan added with a laugh. Make sure you catch the show Tuesday nights on CNBC at 8 PM ET, and tune in to The Bachelorette finale tonight on ABC at 8 PM ET!