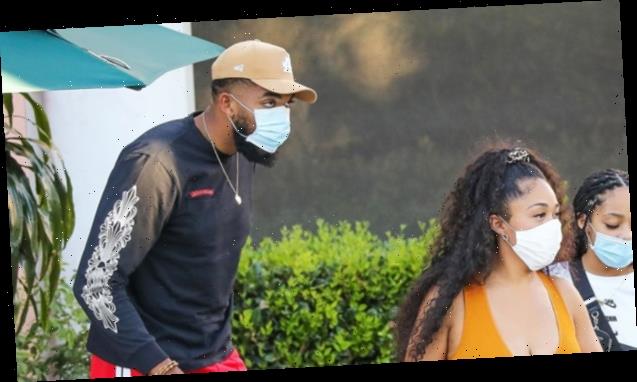 Its seems like Jordyn Woods and Karl-Anthony Towns went from friends to full-on lovers in a short time. But, they’ve been falling for one another for months. Learn how their friendship evolved into a romance that their friends adore.

Jordyn Woods and Karl-Anthony Towns threw fans for a loop when they confirmed their romance on social media last week. While the model, 23, and NBA player, 24, were photographed together throughout the summer, Jordyn maintained that the two were just friends. So, how did things escalate?

“Jordyn and Karl were friends for the longest time and then when his mom passed [in April], she was really able to be there for him because she understood exactly what he was going through,” a source close to Jordyn told HollywoodLife, exclusively — recalling how Jordyn lost her father, John Woods, to cancer in 2017. “Jordyn and Karl got closer and it just naturally grew into them falling in love. They kept it to themselves at first because they didn’t want the pressure, but they’re in love and they just couldn’t hide it anymore,” the source said, adding that Jordyn’s friends are all “so happy” for her. “It’s a match made in heaven.”

A second insider went on to explain that Jordyn and Karl became especially close throughout quarantine, due to the COVID-19 pandemic. “They really got to know each other more over quarantine and confided in each other over so many things. They trust each other,” the source revealed. “They were friends for quite a bit and it’s turned out to exactly what their families wanted for them. Everybody in their lives loves what’s going on right now with their relationship. It’s moving into a really great situation and it’s all built around trust.”

Jordyn and Karl didn’t make it a secret that they were spending time together this summer. Nonetheless, they didn’t think they had to sneak around because they truly didn’t plan on dating, a third source said. “Jordyn never imagined things would turn romantic with Karl but her feelings for him shifted over time. They built a strong foundation off of a friendship and she even looked at him as a brother at one time,” the insider admitted.

“But, after spending more and more time together, things transitioned and feelings grew in a different, romantic direction. — That’s why Jordyn’s family respects Karl so much and approves of their relationship, because they know he cares about her as a person on a deeper level,” the source said, adding, “They clearly have a strong connection and are really happy together.”

After a slew of summer lunches, dinners and various hangouts — some of which included Jordyn’s younger sister Jodie — Jordyn and KAT found love with each other. The pair confirmed the romance by sharing PDA photos and videos together from her 23rd birthday celebration over the weekend. The Minnesota Timberwolves center even gifted his lady love with a clutch for her “Jordan birthday.”