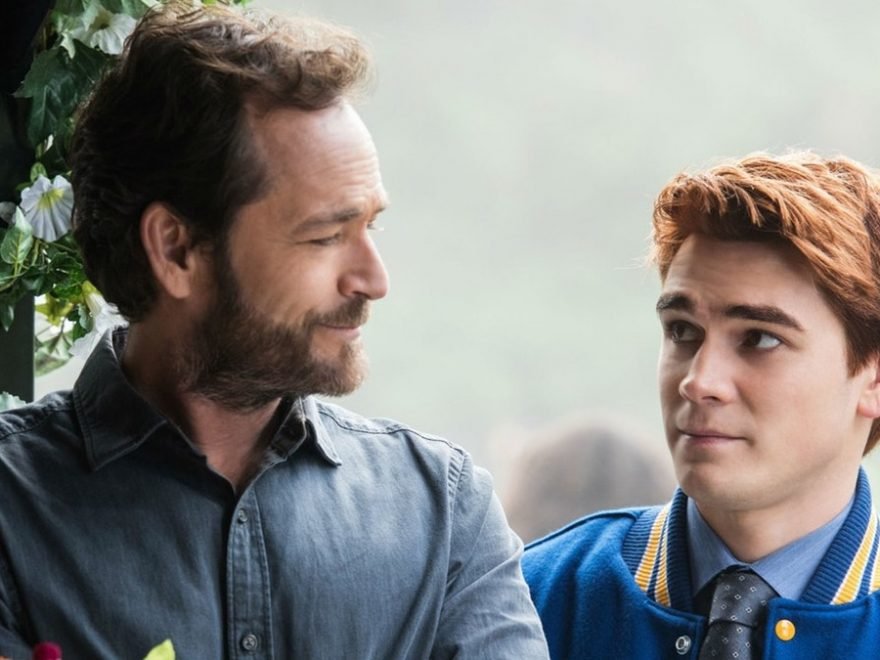 When Riverdale returns for Season 4 on Oct. 9, fans better prepare themselves for what sounds like a heartbreaking premiere. Riverdale‘s Luke Perry tribute is the first episode of the season and according to Perry’s former costar and onscreen son, KJ Apa, the hour will be a roller coaster of emotions. With Perry’s death in March after suffering a massive stroke, one can only imagine that the tribute honoring the late actor will tug at viewers’ heartstrings. But as sad as the episode sounds, Apa said the writers did a wonderful job paying respect to both Perry and his character, Fred Andrews.

While chatting with Extra at the 2019 Teen Choice Awards, Apa said about Perry’s episode, "Everything in that first episode is so authentic and so real that it didn’t really feel like shooting an episode of our show. It was obviously really emotional." The actor, who plays Archie Andrews, said they still have a lot to film for the "beautiful" tribute, despite it being the premiere. He explained, "It was a slow episode, just because there was a lot of time that needed to be taken, of course, but I’m super excited for people to see it. I think we did a good job in honoring Luke."

Apa also said the episode was understandably hard to film, especially since the cast had to experience all of their initial grief all over again. "It’s a tough one, because you kind of have to go back in time a little bit and access that emotion again, which is not something that everyone feels comfortable doing," he said. "In this case, it’s something that we had to do for the story and I think the writers absolutely nailed it."

The 22-year-old also opened up about what it was like working with Shannen Doherty, Perry’s good friend and one-time Beverly Hills, 90210 costar, who has a special role in the fourth season premiere. Apa said about filming with Doherty, "It was awesome. I had a couple of scenes with her. She’s amazing and a beautiful actress. Honestly, everything in that first episode is authentic and so real that it didn’t really feel like shooting an episode of our show."

Exact details about Doherty’s role remain unknown, but executive producer Roberto Aguirre-Sacasa told Variety at Comic-Con in July that her role is "very emotional" and will "reflect Perry’s enduring legacy and the indelible imprint his character." He added about Doherty and Perry, "They were such good friends, and when we were putting together this tribute episode, we wanted to make it as special as possible." Aguirre-Sacasa also called Doherty’s part a "pivotal, super-emotional role."

As for Doherty, she shared an Instagram on July 21 (above) and said about joining The CW drama, "I am deeply honored to pay tribute to Luke on Riverdale. The care in which this show takes in honoring his memory is beautiful. He is missed. Today. Tomorrow. Forever."

There’s no doubt the Season 4 premiere will be a whirlwind of emotions for fans. Like Aguirre-Scasa told Variety, "We really wanted to honor Luke, to honor Fred and we wanted it to be a stand-alone, really emotional, really focused on what this character meant to this group of people." The episode sounds like it will be an unforgettable tribute to both Fred and Perry.