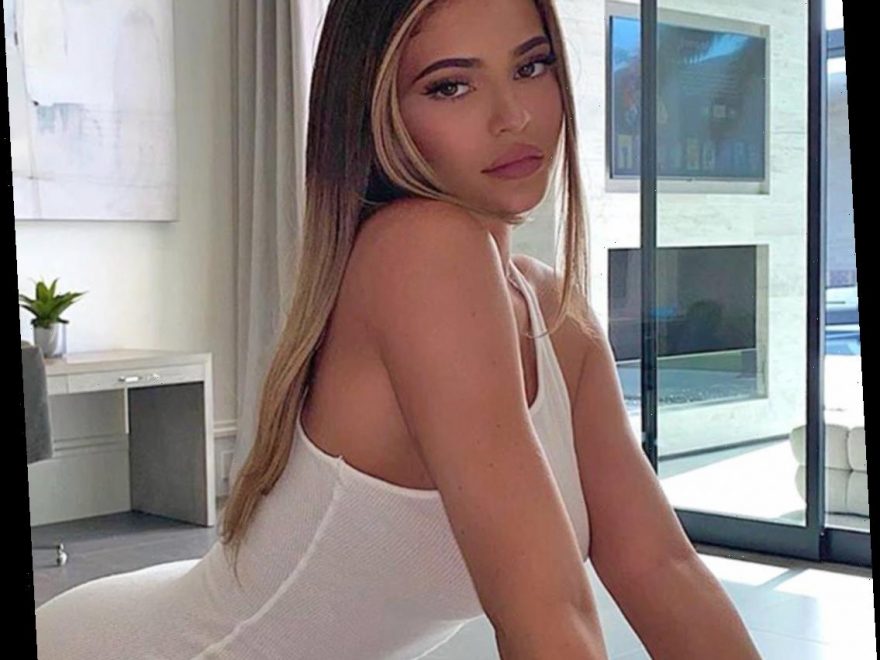 Kylie Jenner is turning up the heat!

The Keeping Up With the Kardashians star took to Instagram on Wednesday evening with a video that showed off what could be her most daring look of all time: a leopard-print thong bodysuit, complete with a deep v-neck cut and floor-length sash.

The revealing number—which slightly resembled what she wore in Cardi B and Megan Thee Stallion's "WAP" music video—highlighted Kylie's cleavage, and as she spun around in a mirror, the rest of her curves, too.

Making the look even more dramatic was Kylie's long blonde extensions that reached all the way to her knees, and which seemingly inspired what she captioned the Instagram Story: "Inches baby."

"had to get these for a shoot," Kylie wrote alongside the chic photo. "kinda love em. might stay."

The caption could mean that Kylie's entire leopard look was for a photoshoot of some sort, but she never explicitly stated the reason for the outfit that left little to the imagination (as if she needs one, any way!).

Regardless, there's no denying just how good the reality star looks.

To see even more of Kylie, scroll through the below gallery of her best bikini pics!

Plus, don't miss an all-new KUWTK tonight on E! You can also catch up with past seasons on Peacock.

(E! and Peacock are both part of the NBCUniversal family.)

Kylie uploaded a series of swimsuit selfies on Sept. 28, but the second one had an important caption urging her followers to make a plan to vote in the upcoming presidential election!

"but are you registered to vote?" the Kylie Cosmetics mogul wrote.

Kylie took advantage of the Cali weather to celebrate "the 7th day of fall."

Kylie's 23rd birthday called for a trip to Turks and Caicos, where she posed in an outdoor shower for this sexy snapshot!

In May, Kylie showed off a lime-green colored bikini perfect for the start of summer.

"what's meant for me will always be," Kylie captioned this sultry snapshot, along with a brown heart emoji to match her bikini.

Kylie in her "happy place" according to her Instagram caption.

The reality star sports a white bikini on a 22nd birthday trip to Italy.

Soaking up the sun! Jenner throws a larger-than-life pool party for her BFF Stassie's 22nd birthday.

Strike a pose! Kylie and her baby girl posed alongside bestie and Star Lash Extensions CEO Yris Palmer and her daughter Ayla.

"MY GIRLS," the reality TV personality captions her post, standing alongside her 1-year-old daughter and Jordyn Woods. The trio rocked matching neon-green swimsuits during their vacation together.

Donning a red bandana-printed two-piece, the beauty mogul shows off her curves by taking a mirror selfie.

Beach babes! Kendall and Kylie look like they could be on the cover of the Sports Illustrated Swimsuit Issue in the vacation pic from Turks and Caicos.

Kylie matches her Louis Vuitton one piece with a coordinating head scarf in the same print.

Kylie reveals her eye-popping bikini on Day 2 of Coachella 2016.

Hot damn! After enjoying a horseback riding session, the reality star steps out in a brand-new bikini on Casa Aramara Beach in Mexico.

The young star gives a gracious glimpse of side boob while lying low in a BOSSA bathing suit.

Guess who decided to bring back that retro one-piece Kris Jenner used to rock back in the day?

Kylie shows off her enviable curves in this sexy white, cut-out bikini.

During a trip to Punta Mita, Mexico in 2015, the E! star flaunted a toned tummy while taking a dip in the ocean.

And the annoying part is she probably really did.

Please teach us your ways, Kylie!