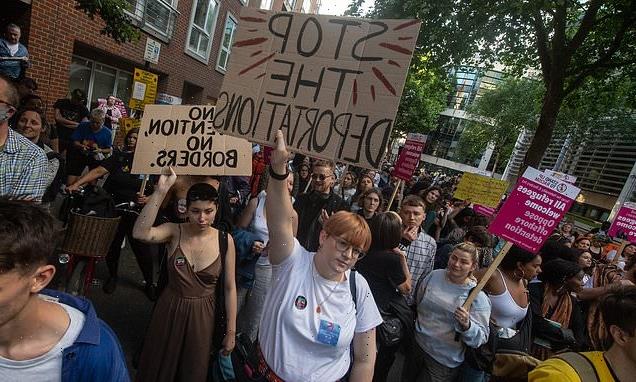 Can’t these self-righteous courtroom warriors see they’ll make traffickers even richer? LEO MCKINSTRY on the human rights lawyers ensuring barely any migrants will be flying to Rwanda despite court ruling

The rule of law is essential to civilisation. But rule by lawyers is a catastrophe for democracy, making governance by elected representatives impossible and ensuring the triumph of narrow, vested interests.

And that is precisely what has happened with the Government’s attempted crackdown on illegal immigration, much of which is organised by criminal gangs of people smugglers across the English Channel.

In response to mounting public concern about this illicit and life-threatening trade, the Home Secretary Priti Patel came up with a bold, imaginative scheme whereby illegal migrants who use this route would be liable to be deported to the African republic of Rwanda. Her plan, agreed by the Rwandan government, aimed to act as a deterrent to potential asylum seekers and so break the business model of the traffickers.

But now her policy is being systematically torn apart by an unaccountable coalition of politically motivated lawyers, Left-wing trade unions, subsidised pressure groups and radical activists – all of them ruthlessly exploiting the judicial system to thwart our democratically elected Government as it tries to enact one of its key, and most popular, measures. Today the first flight should take place from London to the Rwandan capital Kigali under the new scheme.

Indeed, last Friday, in a case brought by human rights lawyers claiming it was unlawful, the High Court ruled that the deportations were perfectly legal and could go ahead.

Yesterday, those same lawyers lost their challenge in the Court of Appeal when the flight was again declared legal. 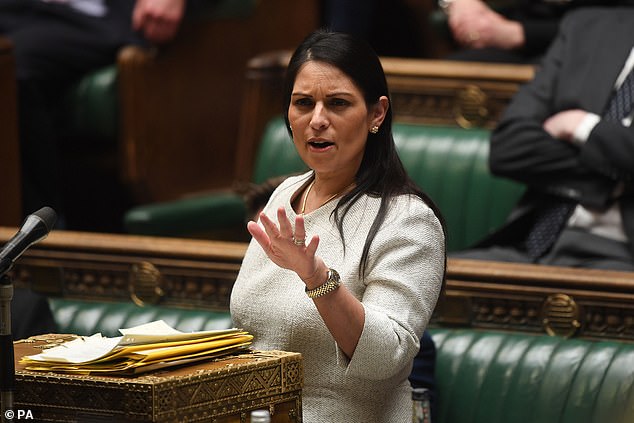 Home Secretary Priti Patel makes a statement in the House of Commons in London, following a scheme designed to crack down on migrants landing on British shores after crossing the Channel in small boats by sending them to Rwanda 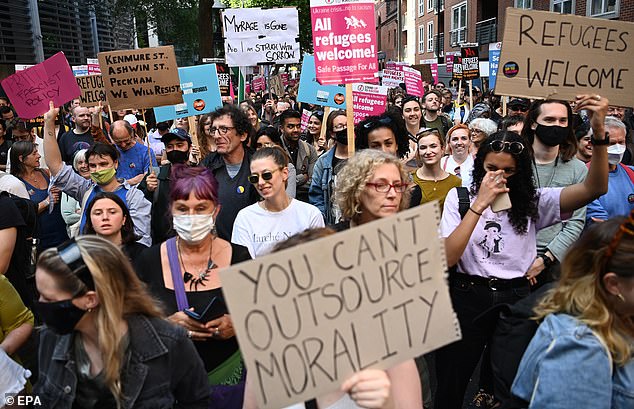 Human rights protesters demonstrate outside the Home Office in London, Britain, 13 June 2022. An Appeal Court judge has ruled against stopping the UK Home Office from flying asylum seekers from the UK to Rwanda

And yet, despite this double defeat for the human rights lobby, the deportation is still in jeopardy because the lawyers have lodged a barrage of claims on behalf of individual asylum seekers to thwart the aircraft’s passage to Kigali.

Originally the plane was meant to take 130 deportees, but that number had been whittled down to single figures yesterday evening. And as this paper went to print, there remained the very real possibility that not a single passenger would be left on board.

Surveying the political wreckage they have created, the lawyers and their allies might be feeling smug today. Yet they should really be feeling shame. For all their posing as humanitarians, they have in effect collaborated with the cross-channel criminal gangs.

As a consequence of their judicial victory, they have not only given a boost to this evil trade but have also put more lives at risk on one of the busiest sea routes in the world.

Already 10,000 people have made the journey across the Channel in rickety boats this year – 111 on Sunday alone – and that total will only grow rapidly if the Rwanda deterrent is seen to be so easily and continually thwarted. The anti-Patel brigade likes to trumpet its morality, but in truth these self-righteous courtroom warriors are infused with hypocrisy.

They talk about the cruelty of the Tory Government – one noisy group Care4Calais has called the policy ‘barbaric’ – yet in their support of the Channel anarchy they are actually propping up an illegal immigration system that rewards those with the most cash and physical strength instead of the asylum seekers who follow the right procedures and may have more deserving cases. 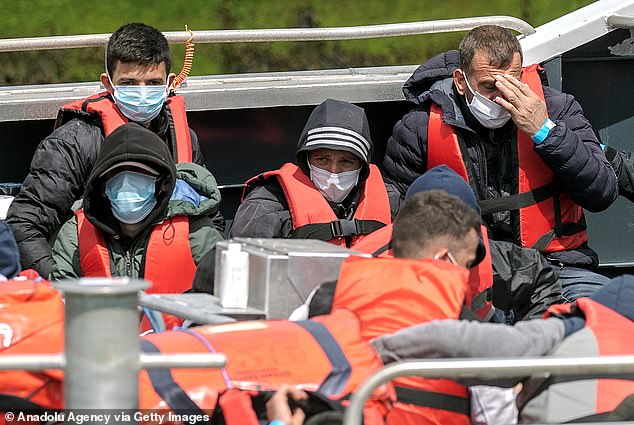 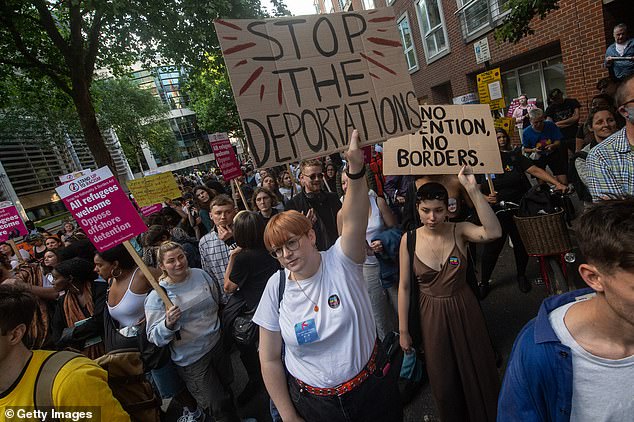 Hundreds protest against the Rwanda deal at the Home Office on June 13, 2022 in London, England

A further hypocrisy can be found in their eagerness to paint Rwanda as some kind of African hellhole – this from the very metropolitan liberals who are usually keen to signal their virtue by ’embracing’ other cultures.

Indeed, many Rwandans have been appalled at the way their emerging nation has been trashed for political ends.

As well as hypocritical, the anti-Rwanda coalition is also deeply dishonest. Its propaganda likes to pretend that all those who take to dinghies to cross the Channel are fleeing for their lives.

Mark Serwotka, the hard-Left leader of the Public and Commercial Services Union – representing large numbers of the civil service and which has been involved in the court cases – moans that the Government should show ‘respect’ for ‘desperate people’.

Similarly a lawyer who represents the Asylum Aid charity told the BBC yesterday that the deportees ‘are highly vulnerable, deeply traumatised individuals who are seeking safe haven here’.

But these heart-tugging descriptions are questionable at best. Most of those attempting to cross the Channel are physically fit, single young men who are already in France, one of the safest, most civilised countries on earth.

What’s more, cynicism is piled upon dishonesty. The human rights industry happily takes vast sums from the British public in legal aid and grants – no less than £80million is given annually to the United Nations’ refugee agency, which has also taken part in the court cases – yet shows nothing but contempt for British public opinion and our elected government.

Instead, it uses legislation in ways that were never intended. One of its favourite weapons is the European Convention on Human Rights, particularly Article 8 which protects privacy and family life.

But the convention, enshrined in British domestic law through the 1998 Human Rights Act, was meant to tackle genuine persecution, not to act as a prop for claims brought by economic migrants.

It is some achievement by the lawyers to have given the noble cause of human rights such a bad name through their own politicised conduct.

Just as manipulative is their increasing resort to the 2015 Modern Slavery Act, which aimed to deal with real instances of sex trafficking, domestic servitude and exploitation through forced labour. It would be a tragedy if this well-intentioned measure were to become another tool of people smugglers.

But it seems there is no stopping this sanctimonious cabal.

For what lies behind all this legal posturing is a kind of political fundamentalism – a pro-immigration zealotry and open door fanaticism. 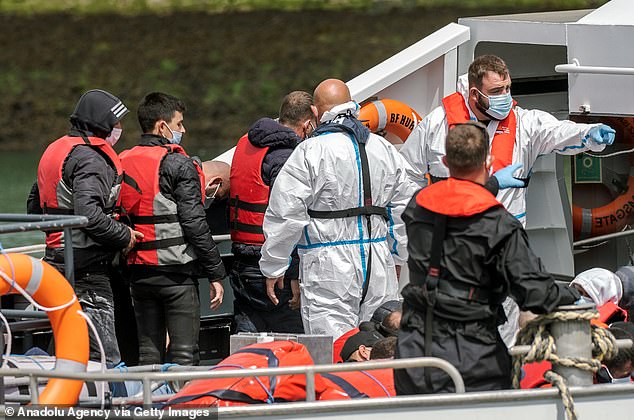 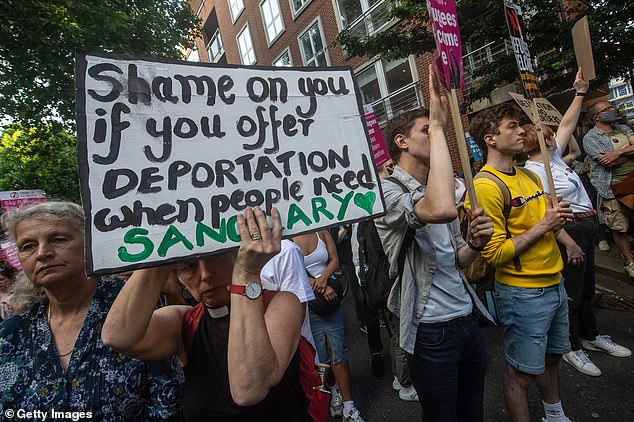 Protesters are pictured demonstrating against the Rwanda deportation scheme in London

There is no type of border control, never mind deportation, which would be acceptable to them. They do not even believe in such a concept as illegal immigration. And their actions in the courts encourage mimicry on the streets by Left-wing protesters who now use physical force to prevent deportations.

That happened in Peckham, south London, on Saturday when a large crowd forced police to release a suspected illegal immigrant from the back of their van before he was taken into detention.

After the incident, local Labour councillor Reginald Popoola tweeted: ‘Really proud of our community for turning out today and resisting. Peckham people power!’

Just as anarchy in the Channel is a disaster, so it would be a calamity to tolerate the kind of immigration free-for-all that Councillor Popoola envisages.

If any citizen from around the world was entitled to live here, public services, the welfare system, housing, healthcare – all our civic infrastructure would quickly be put under intolerable strain.

As it is, the pressures are already immense from our weakened border controls. Contrary to the myth-making of the metropolitan class, the problem with the Tories on immigration is that they have been too soft rather than too hard.

Incredibly, in the last year alone, more than one million foreign nationals were allowed to settle here, easily a record and around twice the scale of the number of people who arrive during the peak years of the last Labour government. Meanwhile, the asylum backlog is growing and deportations are falling, with the taxpayer now forced to fork out £5million a day in hotel bills for asylum seekers who are waiting for their claims to be assessed.

Miss Patel’s Rwandan scheme should have been the first step in taking back control. But, as this week’s events have proved, proper progress won’t be made while the self-righteous nexus of lawyers and activists continues to hold sway.