It’s too easy to miss brilliant streaming shows, movies and documentaries. Here are the ones to hit play on or skip this week.

Loki might be the god of mischief, but the universe has pulled a ripper of a prank on him this time around. In a previous three-hour Avengers movie, Loki (Tom Hiddleston) escaped superhero custody using a magical glowing gizmo. Unfortunately for him, this split him off into a different timeline, at which point he was immediately pounced on by the black-clad paramilitary cops of the Time Variance Authority, a previously unknown entity that works to prevent new timelines splitting off from the single approved one. 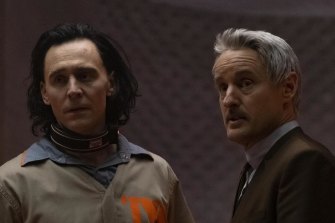 And so this genre-twisting six-episode series plonks an actual god – hilariously enough – into a Kafkaesque bureaucratic nightmare. The TVA HQ is a futuristically dated megalopolis full of offices, libraries and courtrooms that might have been directly imported from the fancy parts of 1960s East Germany. Sinister orientation cartoons explain what fresh hell this is, and Loki, stripped of his magic powers, quickly realises that there are only two possible ways out.

One is instant, permanent oblivion at the hands of the TVA. The other, perhaps, is in making himself useful to the TVA. In particular to investigator Mobius M. Mobius (Owen Wilson), who is hunting a time-hopping “variant” even more dangerous than Loki. And so all of a sudden Loki becomes a mismatched-buddy-cop show – and one that works brilliantly on that level.

Wilson, now at the peak of his powers, is a real hoot. He’s effortlessly perfect as the grizzled old detective type, but he’s also deadpan comedy gold, and watching him and Hiddleston (a distinctly English kind of Norse god, it must be said) play off each other is an unexpected delight. Mobius has seen it all before. Loki sputters, seethes and is seduced by temptation to his ego. 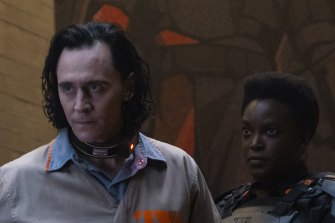 Tom Hiddleston is a distinctly English kind of Norse god in Loki.Credit:Disney+

Director Kate Herron allows the comic beats a subtlety that enhances their impact. Your average star-clogged Marvel movie has little hope of reaching Gene Siskel ’s old baseline for a film worth watching – that it be more interesting than a documentary of the same actors having lunch. Loki, though, makes you feel like you are having lunch with Wilson and Hiddleston.

And while it’s quite possible that nobody has ever even thought of doing that before (apart from maybe Herron, series creator Michael Waldron and executive producer Kevin Feige), it suddenly shapes as the hottest lunch ticket in our timeline. It’s all highly accessible to non-Marvel fans, too. 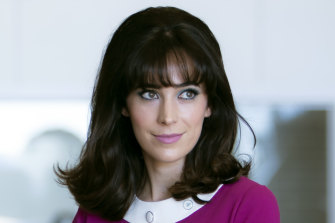 The vivacious Geraldine Hakewill gives this series such a radiance that it’s impossible to imagine anyone else in the role of Peregrine Fisher, feisty feminist and naturally gifted murder sleuth in the awfully sexist Melbourne of the 1960s. And everything else is working perfectly too.

The costumes and cars are to die for and the production design and location scouting transport us to a world that’s as different as it is familiar. As the new second season begins – in hourly episodic form now, rather than telemovies – there’s still an element of daydream fantasy to it, but a most agreeable one.

And the murders! Just for starters there’s a couple of fondue-eating swingers baked to death in a sauna. And it turns out that Peregrine’s fiance, copper James Steed (AACTA winner Joel Jackson) isn’t quite as evolved as he’s going to need to be. Series creators Deb Cox and Fiona Eagger don’t neglect to get some value out of their supporting players in Toby Truslove, Louisa Mignone and the low-key hilarious Catherine McClements. Great fun. 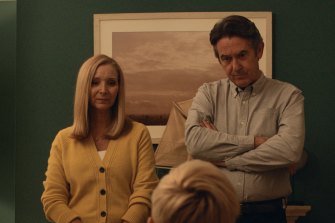 It’s a deeply affecting second season of the black comedy series following Canadian comedian Mae (Mae Martin) as she blows up her new life and relationship in Britain to travel back and forth to Canada trying to deal with the deep-buried trauma that underlies her devastating anxiety disorder. Things get real tough but never too bleak. Devoted girlfriend George (Charlotte Ritchie) and goofy housemate Phil (Phil Burgers) provide loads of laughs and love, and mum Linda (Lisa Kudrow) a darkly surreal tinge. Outstanding television. 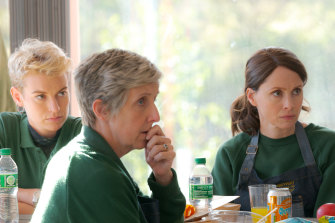 When their horrible boss shows up dead, a bunch of women working in a Welsh brewery find themselves in a dark pact.Credit:Stan

When a bunch of women from a Welsh brewery play a cruel prank on their horrible boss (Aneurin Barnard) after a boozy party, you’d imagine some regrets among the sore heads the next day. But when the guy turns up dead there’s panic, guilt and a group of very different women bound together by an uneasy pact of silence. It’s especially tricky for Anna (Breaking Bad’s Laura Fraser), who is married to one of the coppers investigating it. Then the twists begin. Engrossing stuff from Wentworth veteran Pete McTighe. 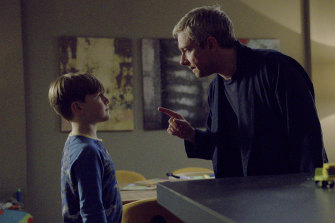 Kids don’t grow up that quickly. And if, like Londoner Paul (Martin Freeman), you find yours a daily source of anger verging on rage, being a parent is a long haul indeed. Which is not to say that Paul and Ally (Daisy Haggard) don’t love Luke and Eva (who in this new season are now 13 and 10). Series creators Freeman, Chris Addison and Simon Blackwell (those last two veterans of Veep) pull off a brilliant balancing act in keeping the show as funny as it is dark and as tender as it is aggravated. 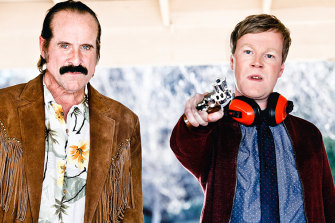 American Gods star Peter Stormare tones down his grouchy menace a bit in this enjoyably ridiculous comedy series. Here he’s Ingmar, a washed-up Swedish stuntman trying to eke out a living as a private eye in Los Angeles. His ineptitude leads to him taking on a partner in the form of a washed-up Swedish DJ (Johan Glans), and the series’ quirky European comic sensibility brings sudden belly laughs when you least expect them. There’s real grit to the visuals and regulars include Keanu Reeves and Traci Lords.

Find out the next TV shows, streaming series and movies to add to your must-sees. Sign up to get it every Thursday