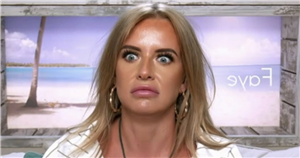 As the seventh season of Love Island nears the end, viewers are witnessing some of the most explosive scenes ever aired in the show's history.

A shock dumping on the weekend saw the islanders vote for the least compatible couples, which sent Priya Gopaldas and Brett Staniland packing.

The savage vote saw couples turn against some of their friends, which caused an awkward and tense feel in the villa amongst the islanders, as no one knew who the others had voted for.

However, Priya shocked the ITV dating show's fans as she seemed to really stir the pot before bidding farewell to her fellow islanders.

The trainee doctor pulled aside estate agent Faye Winter, privately revealing to her that she and Brett did not vote for her and Teddy Soares the previous day.

Priya could've easily left the villa without saying a word, keeping some peace among the islanders who hadn't discussed who they had or hadn't voted for.

However, her decision to state her voting decision meant a lot of feathers were ruffled as a result, as it set Faye off on a mission to figure out which couples had betrayed her trust by voting for her and Teddy.

Fans flooded to Twitter, convinced the savage move from Priya was in fact her way of getting revenge on the girls, after they all blabbed to their partners that she had confided in them about getting the ick for Brett; which later got back to him.

One fan said: "That’s Priya getting revenge for the girls telling on her", with another adding: "Priya did that as revenge because the girls snaked what she said to the whole villa and I love it."

The seemingly sweet islander didn't seem like the type to plot against her female islanders, but the theory would sure make things interesting. Another Love Island viewer shared their thoughts: "Priya did not strike me as a revenge kinda gal lmao she said 'kick me out? deal with hurricane Faye'"

However, other theories have surfaced, with many convinced the real reason for Priya's statement was an orchestration by the show's production team.

This series has been exceptionally dramatic, with production decisions made by the show's bosses being the catalysts for pretty much every single argument.

One person wrote: “Priya was told to tell Faye. Faye is on a mission now.”

A second added: “I feel like Priya was told to tell Faye that by the producers so it stirs the pot.”

While a third agreed: “Producers without doubt told Priya to tell Faye that – so Faye now knows at least a few of her close mates voted for her and Teddy.” From the set-up cinema night where clips of Teddy flirting with Clarisse were shown to Faye out of context, to Lillie Haynes' decision to blurt out her connection with Liam during the post-Casa Amor recoupling – so many of this season's drama has appeared to be controlled by the show's executives.

Faye more than anyone has become known for her fiery temper, with her fellow islanders often looking nervous to tell her the truth.

Earlier this month, there were calls for the Islander to be kicked off the show after she berated Teddy in a furious row.

Her treatment of her partner triggered more than 25,000 Ofcom complaints – the most in Love Island's history.