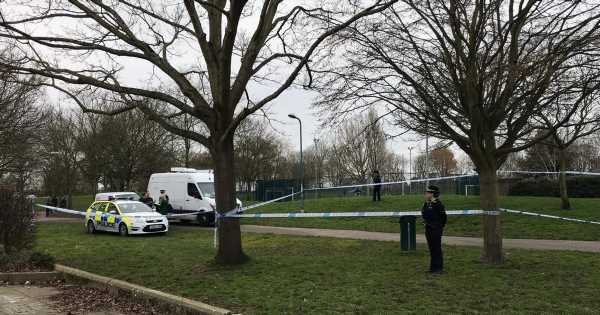 A 20-year-old man has been found guilty of causing grievous bodily harm after repeatedly stabbing a police officer.

Michael Enzanga – likened to a "caged animal fighting for his life" – was found guilty at Portsmouth Crown Court after he attacked PC Russell Turner.

Enzanga, from Tottenham, north London, was also found guilty of possession of a knife, four charges of possessing crack cocaine and diamorphine with intent to supply the class A drugs on February 20 and 21, and a charge of possessing criminal property, namely a stash of money.

PC Turner, 56, suffered a collapsed lung after being repeatedly stabbed near a children's adventure park in Portsmouth, Hampshire, on February 21.

The incident happened as he and PC Clare Parry were looking into reports of drug dealing in Stamshaw Park.

Both officers were in plain-clothes at the time.

The officers approached Enzanga, then aged 19, in the park but he tried to run away and a struggle broke out between the two officers and the suspect, Portsmouth Crown Court has previously heard.

Prosecutor Dale Sullivan had said: "During the course of the struggle the defendant stabbed the officer several times, causing wounds to him which ultimately caused his lungs to collapse and him needing medical attention."

PC Parry said the defendant was like a "caged animal fighting for his life" when he attacked PC Turner.

She said Enzanga seemed to do the punching action "several times" and that "from what I could see of Russ he was stabbed at least twice".

In a taped interview played to the jury, PC Turner said the thuds to his body seemed like "what I imagine someone like Mike Tyson banging and hitting me hard in the back".

He said he saw a black-handled knife with a sharp silver blade that was about 5in to 6in long.

Enzanga, who was homeless and sleeping in the park at the time of the incident, had claimed he was running away from a pair of attackers when he "ended up getting chased by the police".

A carrier bag containing 60 wraps of crack cocaine or heroin was left at the fight scene and police later recovered a silver kitchen knife, the jury was told.

Enzanga was also found to be in possession of nearly £1,000, which he previously said came from monthly benefits and borrowing cash from friends.