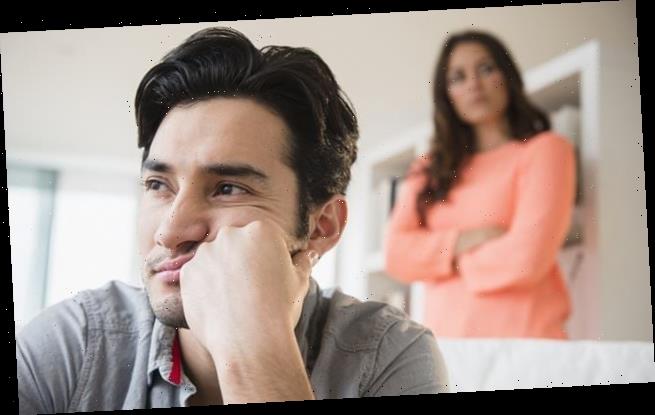 A groom-to-be who was forced to purchase three engagement rings after his fiancée repeatedly lost and broke the bands several times has been urged to reconsider getting married.

Posting on Reddit, the anonymous man, 27, from America, explained he and been with his 24-year-old girlfriend had been together for three years when he bought her $4,000 engagement ring following advice from two of her closest friends.

However, she phoned in him tears to say she had lost the ring, and went on to misplace the replacement and break a third jewel that he gave to her.

Other users were quick to criticize the 24-year-old, with some suggesting she may have sold the rings to fund a drug addiction or pay off a debt. 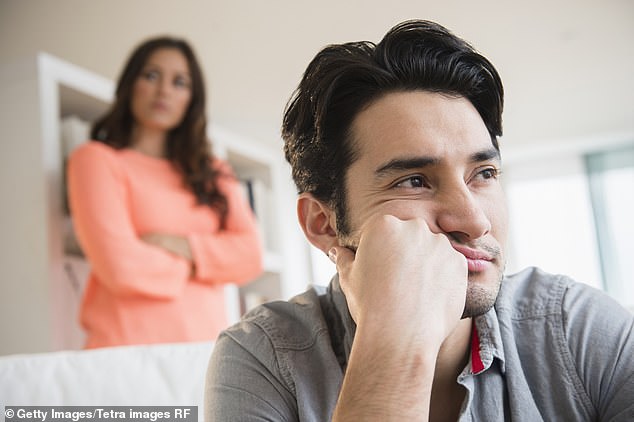 A groom-to-be, from America, has revealed how he was forced to purchase three engagement rings after his fiancée repeatedly lost and broke the bands several times

Posting online, the unnamed man revealed he had proposed to his girlfriend after months of ‘not-so-subtly hinting’.

He bought her $4,000 with the help of two of her friend, explaining: ‘When my fiancée saw it, she told me she loved it and I’m pretty sure she was telling the truth.’

Yet months later, she called him in tears, and had ‘somehow lost her ring on the way home from work’ and had ‘no clue’ where it could be.’

He said he bought her a second ring from his savings because she was ‘clearly distraught’, saying: ‘It wasn’t quite as expensive as the last, but it was from the same jeweler and still a good make.’ 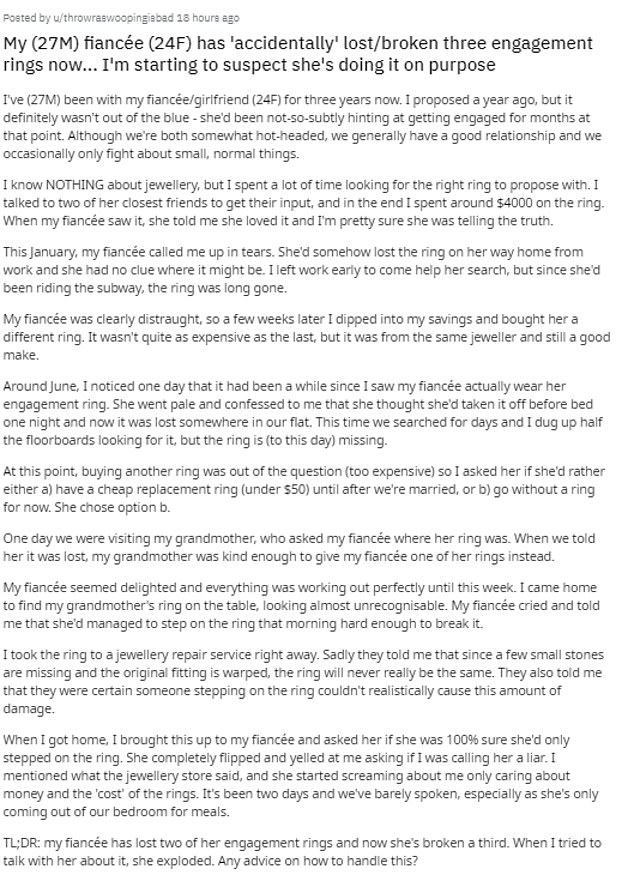 In a lengthy post on Reddit, the man explained he was now ‘barely speaking’ to his fiancée after she claimed to lose two engagement rings and damaged her third beyond repair

But months later, he noticed that he hadn’t seen her wearing the engagement ring ‘for some time’  she came to him again to say that she had lost the second, replacement, engagement band.

Concerned about how much another ring would cost, he offered to buy her a cheap replacement ring but his grandmother instead gave her one of her rings instead.

However, just weeks later he returned home to discover that she had allegedly stepped on the third ring hard enough to break it beyond repair.

He said he immediately took the ring to a jeweler, who told him that several small stones were missing and the original fitting was ‘warped’.

He added: ‘They told me they were certain someone stepping on the ring couldn’t realistically cause this amount of damage.

The groom-to-be went on to confront his fiancee about the jewel, who ended up ‘completely flipping’, leaving them ‘barely speaking.’

He begged for advice from others on how to handle the situation, with many urging him to consider that his girlfriend may have sold the rings because she’s either in debt or battling an addiction.

One person wrote: ‘I would take pictures of the rings, if you have any and ask every shop in town if they had one like it around the time those went missing. Something’s very wrong here.

‘Also you know renters and homeowner policies will cover engagement rings and valuable for very little added on, right? I would have done this the first time she lost one but truth be told, they would probably be after you for insurance fraud by now, because this does not happen. Be suspicious of her. And her reaction, because it was telling.’

Another added: ‘She’s totally selling those rings for drug money. Probably used a hammer to get the small stones out of grandma’s ring.’

Others suggested the fiancée keeps losing her ring because she isn’t ready to get married and her reaction to being questioned is a sign that she’s lying about what happened to them.

‘You should look into it more – no matter her reaction. And her reacting that way is also a bad sign. It looks as if she doesn’t want people to know that she’s engaged. I advise you to clear this up before you marry that girl,’ wrote one.

Another said: ‘Her screaming and yelling at you when you debunked her lie says enough. If I was you I would reconsider getting married.’