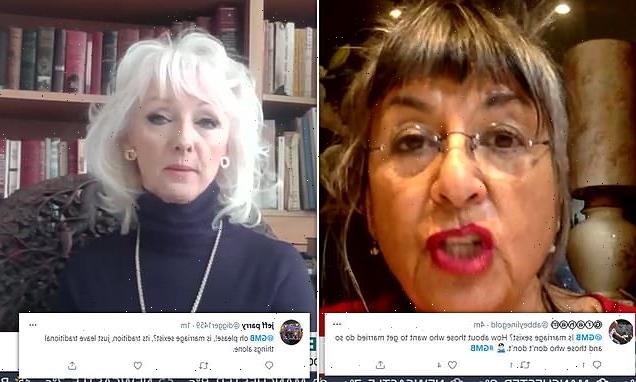 Married actress and presenter Jeni Barnett has claimed that marriage is a patriarchal tradition and urged women who do tie the knot to ‘remain who you are’.

Jeni, 72, from London, who wed actor Jim Bywater 11 years into their relationship, appeared on Good Morning Britain today alongside Debbie McGee to debate whether marriage is inherently sexist.

The host of Great Food Live said that she only married her long term partner so her child would ‘become legitimate’, but that she felt too ‘trapped’ to wear her wedding ring for six months – telling women that ‘you’re not a chattel’.

Meanwhile Debbie, 62, who was married to late magician Paul Daniels for 28 years, said like several other traditions, marriage has evolved over the years, with viewers agreeing it’s up to individual couples which customs they adopt on their big day.

It comes after the news that both the mother and father of the bride and groom will be named on marriage certificates, instead of only fathers, in the biggest shake-up of the registration system for 200 years. 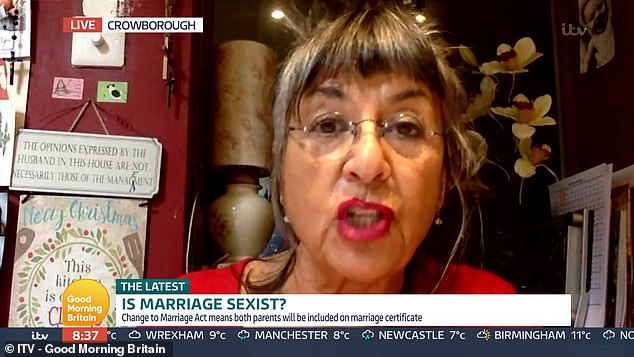 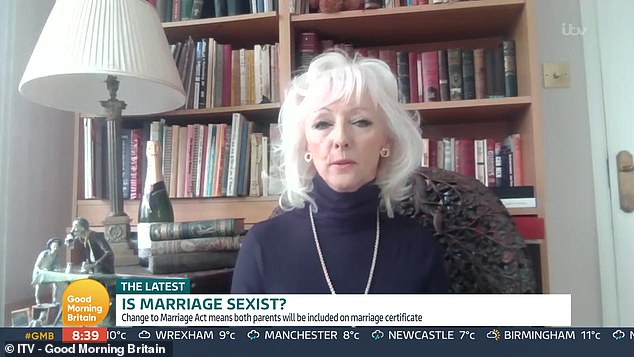 ‘It is absolutely a sign of love and devotion and all the romantic stuff,’ said Jeni. ‘But romance finishes after a couple of years. I think tradition is being turned on its head which means the traditions are changing.

‘What us old feminists are saying is, it’s okay to be married and have a wonderful romantic gesture, but you have to be who you are and you have to remain who you are, and you’re not a chattel.’

When asked by host Susannah Reid why she decided to get married despite believing the institution is sexist, she said: ‘Only after 11 years and I did it because we had a kid and I was worried that if I died, he would have had to do paperwork and he wouldn’t have done it, I got married so the child would become legitimate, that’s why we did it.’

Jeni went on to say that there is still progress to be made in terms of equality for women, and that for months she didn’t want to wear her wedding ring or take her husband’s name.

Viewers were unimpressed by Jeni’s argument, with several arguing that sexist customs such as wearing white or being walked down the aisle by your father are not prerequisites of a wedding

‘For women to be women in the 21st century we have made enormous strides forward, but there are things we haven’t done.

‘I couldn’t wear the ring for six months because I felt I was kind of trapped and didn’t take his name, but I can say after years of marriage you get on with your life and he gets on with his, but I wouldn’t have cared if I hadn’t done it.

Viewers were unimpressed by Jeni’s argument, with several arguing that sexist customs such as wearing white or being walked down the aisle by your father are not prerequisites of a wedding.

‘Is marriage sexist? How about those who want to get married do so and those who don’t don’t.’, said one.

Another said: ‘Isn’t it up to each individual person on whether they get married and take their partners surname (irrespective of the gender of that particular couple)?’ 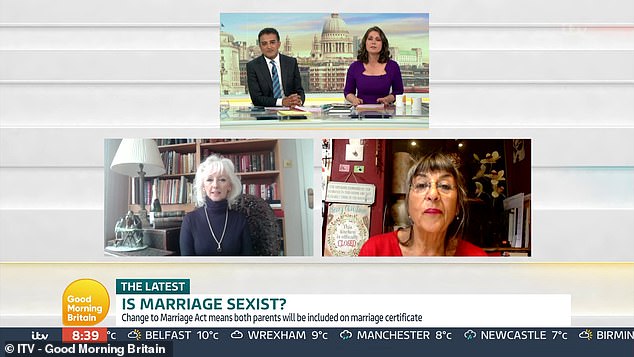 When asked by host Susannah Reid why she decided to get married despite believing the institution is sexist, she said: ‘Only after 11 years and I did it because we had a kid’ 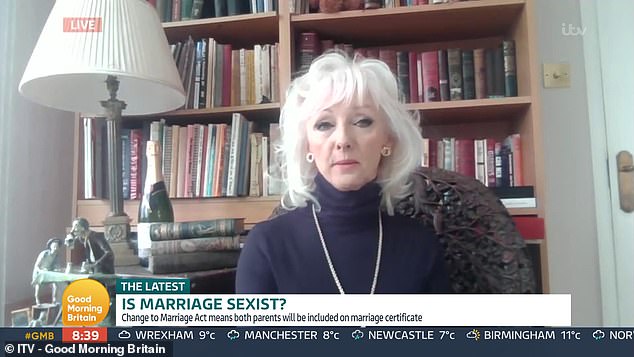 Meanwhile, Debbie said that while weddings may be rooted in sexism, traditions evolve throughout time

Another said: ‘Very little in forced with regards to marriage. No one has to wear white, a bride doesn’t have to be ‘given away’, and the bride does not have to take the husband’s name. It’s up to each couple to decide; what’s the issue?’

Meanwhile, Debbie said that while weddings may be rooted in sexism, traditions evolve throughout time.

She said: ‘I just think that there are lots of other traditions, like Christmas trees Prince Albert was the one who dressed them that’s a tradition, and it’s your choice these days.

Maybe going back 50 years it was always the father but it doesn’t have to be. Usually the girl is very close with her father so I don’t think it’s anything to do with the man saying “This is my woman”.

She believes certain laws – such as Inheritance Tax benefits for couples – should be scrapped in order to prevent people getting married solely for legal reasons.

‘So much has changed and it’s great’, said Debbie. ‘But lots of people still get married because of our laws and I think it’s or laws that need changing.

‘It should just be showing this is the one I love over anyone else, it shouldn’t be about what other people are thinking it should be about two people.’