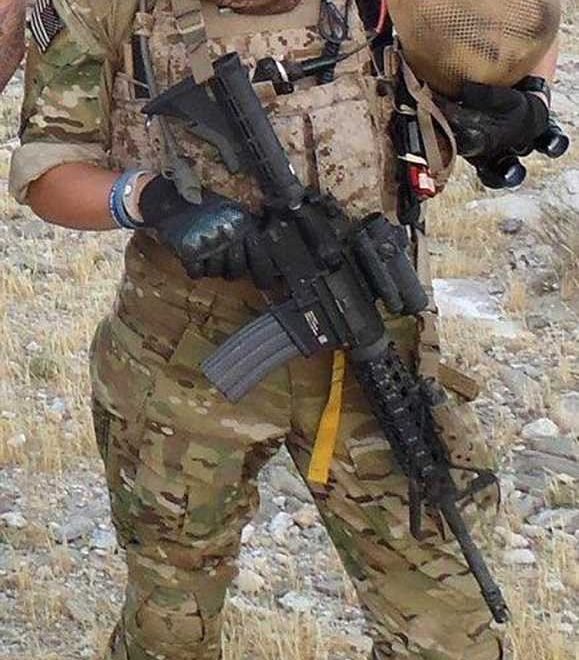 Long before she became an FBI special agent investigating violent crime, long before she was deployed with the Army first to Iraq and then Afghanistan, and long before she worked in the military police at Guantánamo Bay, Nicole Lopez was a college volleyball player in Michigan making the most out of the things her body could not do.

A lifelong athlete, Lopez had for years been adapting to her hearing loss when she joined the volleyball team at her NCAA Division II college. As the setter — “the quarterback of the court” — Lopez played a crucial role and one that, for many other setters, is largely verbal: shouting commands about where to be on the court and where the ball is going.

But Lopez, who has had moderate hearing loss in her left ear dating back to early childhood, often didn’t play with a hearing aid. She had to learn to play the game differently, with sharper eyes and a sharper read on the other players’ body language, even if she couldn’t hear what she needed to do.

“I never really thought about, well, alright, it’s harder for me to figure out because I can’t hear as well,” she says. “I just thought, alright, I have to be able to do everything else that everyone around me could do.”

Lopez credits her mom, a single parent with two kids who returned to graduate school in her late 50s, for passing on her work ethic to Lopez and her younger brother.

That same drive — maybe, Lopez grants, even stubbornness — led her down a four-year-long journey from the military to the FBI, in the process becoming a rare exception to the bureau’s stringent medical requirements of new agents.

The FBI does not have information on the number of special agents with hearing loss, so it’s hard to describe Lopez as a first; and other agents have persevered with prostheses, for example. But her case is unusual.

Initially denied entry because of her hearing loss, and because the agency refused to allow her to test her hearing while wearing her aid, Lopez eventually successfully appealed the FBI’s decision and was admitted to the academy in 2017.

“I don’t consider it really a disability or anything — this is just how I’ve lived my entire life,” she says. “I’ve just always just adapted how I needed to and worked as hard as I needed to get what I want.”

Telling her story publicly for the first time, Lopez says she didn’t think of herself as a trailblazer. She recognizes that her hearing loss makes her a standout at the bureau, statistically, and she knows she is a woman in a field which has historically been presented as male-led.

“I was so just determined to become a federal law enforcement officer that I just had to figure out a way to make it happen,” Lopez tells PEOPLE. “I knew what I wanted to do for so long, and I knew at some point I had to get there.”

“I want people to be able to understand that you still can do what you want,” she says, “and you can still go for those careers and those jobs that you may have thought otherwise that you’re not able to get.”

Her plan was to join the Army and afterward join the FBI. First she tried to enlist at 17, in what was then the thick of the Iraq War, but her hearing test disqualified her.

“That’s the first time in my life that I ever felt like this is something that was unreachable for me just because of my hearing loss,” Lopez says.

Still, she kept going: She applied for ROTC programs at various colleges and then West Point, the country’s most esteemed military academy. West Point, however, also turned her down based on her hearing.

But the ROTC program at the Michigan college from which she would graduate granted her a hearing waiver. Afterward, she was commissioned in the Army as a second lieutenant. At the time, women in the military were still banned from combat roles, so Lopez joined the military police — “about as close as I could get,” she says.

Her first assignment was as a platoon leader at Guantánamo, an American detention facility in Cuba made infamous post-Sept. 11, 2001, for the terror suspects and enemy combatants kept there. She was 22. And she kept going: After Cuba, she returned stateside and was then deployed to Iraq to close the last U.S.-led detention facility there.

At the time, Lopez was also in the process of applying and joining the Cultural Support Team — a new, elite and un-publicized program for women soldiers to essentially go out on the front lines despite the combat ban. Their units would “attach” with special operations forces in the line of fire, communicating with women on the ground in a way that was forbidden for male soldiers, because of local customs.

(The program first came to light in 2015. “We are right next to these Rangers. We just don’t have a title,” Kat Kaelin, a staff sergeant on the CST, told PEOPLE then. “Americans don’t want to hear their daughters and mothers and sisters are out there fighting and dying, but it’s like, ‘Sorry. We were.’ ”)

“That was basically the coolest job I’m ever going to hold in the military,” says Lopez. “It was an amazing experience. Our program helped pave the way for a lot of what women are doing in the military now.”

After her tour in Afghanistan, she returned home to the Midwest to pursue the FBI.

Back then, she had no idea about the delays and bureaucracy she was going to endure. But she would do it all again.

“Now that I know what I do for a living on a daily basis and the people I work with and everything that comes with this job, I wouldn’t change it a bit,” she says.

Initially waylaid by a government shutdown when she applied to the bureau in 2013, her application picked up momentum again in 2014. But she had another problem: The FBI insisted she pass their hearing tests without the use of an aid. (In 2013, she got a bone-anchored hearing aid, or BAHA, which attaches to a point in her skull.)

The bureau turned her down, so she turned to the Hearing Loss Association of America for help with an appeal.

“I had talked to a lawyer, and I found out there was a lot of veterans that were having the same issue where they were applying for federal law enforcement and they weren’t passing the hearing standards,” Lopez says.

As part of her appeal, she says, “I attached basically a resume of everything I had done, proving that despite having hearing loss I can still perform the duties because my military job had what you would consider similar duties.”

More paperwork and delays came, but eventually, in early 2017, Lopez had success: She enrolled in the FBI academy — four years to the month after first applying — and graduated that summer. And she excelled.

“It was an even bigger accomplishment, basically being told that I wouldn’t be able to go to the academy and everything because of my hearing standard, but then to end up having the highest GPA in my class was like just even more amazing for me,” she says.

Right after graduation, she married her husband. (The two first met at a draft party for the Minnesota Vikings. An ardent Chicago sports fan, Lopez insisted on wearing a Bears jersey: “My roommate had kind of joked that nobody was going to talk to me … and that night I ended up meeting my husband.”)

Months later, she was pregnant with their son.

A dream job, a wedding and a child, all in the last two years. She says wryly, “I guess that’s the way to do it.”

Out in the Field

Since joining the bureau, she has worked on a violent crime task force, including murder-for-hire and serial killer cases, child trafficking and bank robberies. Every day is different.

“We try to figure out where the threat is coming from and how to handle it,” Lopez says. “I think I like that piece of it. Not so much the stressful situations, but I like the pressure of it.”

“They can be emotionally tough,” she continues. “But at the end of the day, knowing that we’re helping those victims gives some peace of mind.” (And on the nights she comes home worn out, a Hallmark Channel movie marathon always helps.)

As an agent, Lopez says her hearing loss has not been an issue. She tells PEOPLE she was actually more worried about how she might be perceived because of her gender. That’s a disparity at which she is also chipping away.

“I went to the academy with an amazing group of girls. And I was so lucky that my peers, the females, were so supportive of each other and we still are,” she says. “There are 10 of us that graduated together, and we still have a group chat that we talk in daily.”

Growing up, Lopez says, she didn’t see herself in the military or the FBI. (She jokes that Sandra Bullock’s Miss Congeniality may have been her first exposure to the bureau.) That will be different for the girls growing up now. Lopez recently went to speak at a camp for teenage girls interested in careers as first responders or in law enforcement.

“And that’s just not true at all.”