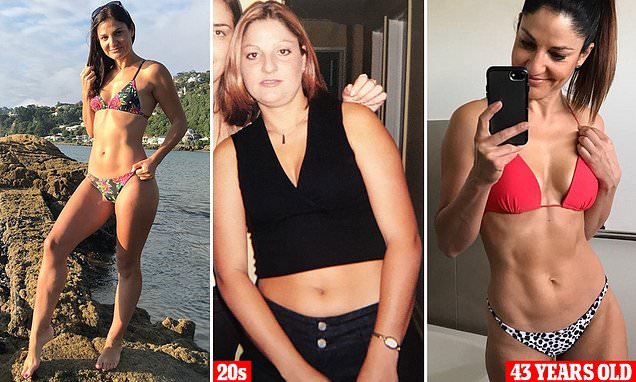 A mother-of-two who overhauled her health and transformed her body four years ago has shared a photo comparing her body in her 20s with today, at the age of 43.

Joanne Peters, from Melbourne, lost five kilos after trying intermittent fasting, removing the majority of dairy from her diet and working out with weights five times a week.

‘There is a point I want to get across and no it’s not that it takes 20 years to lose a chin and grow some eyebrows,’ she said in her post. 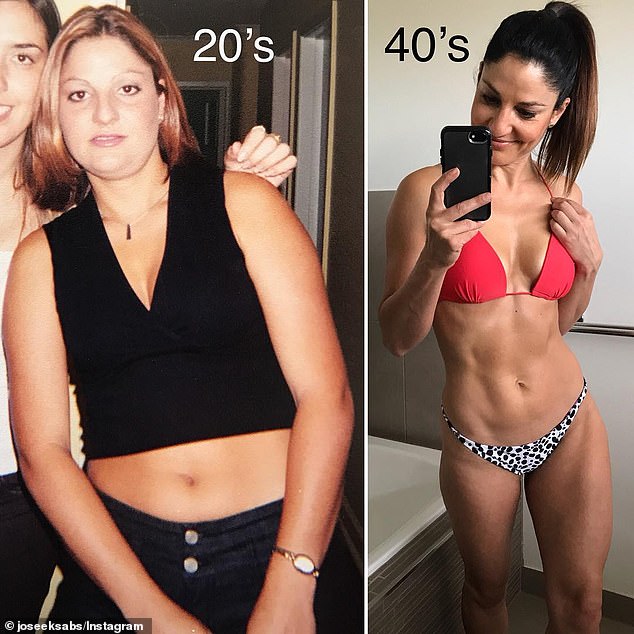 A mother-of-two who went on a major weight loss journey four years ago has shared a photo comparing her body in her 20s with today, at the age of 43

‘Fat loss can happen relatively quickly when nutrition is on point but changing our shape and growing muscle is a slow process especially for females.

‘While I was never what I consider big, I had little muscle and lots of fat and therefore no definition.’

After getting a recent biometric scan at the gym Joanne found out her metabolic age is just 28, confirming ‘it’s entirely possible to get a better body than you’ve ever had before’, she said.

‘The main feedback I get from Instagram followers is on intermittent fasting. I often suggest it when people have plateaued or are doing everything right but can’t shift the weight,’ she told FEMAIL previously.

‘It was a game changer for me and I love when other people tell me it’s been that for them too. Sometimes we just need to search for that one thing that works for us and intermittent fasting is a tool I believe in trying when nothing seems to be working or when cravings are getting the better of you.’

While she doesn’t claim to have been ‘huge’ before it was enough to make her uncomfortable in her own skin. 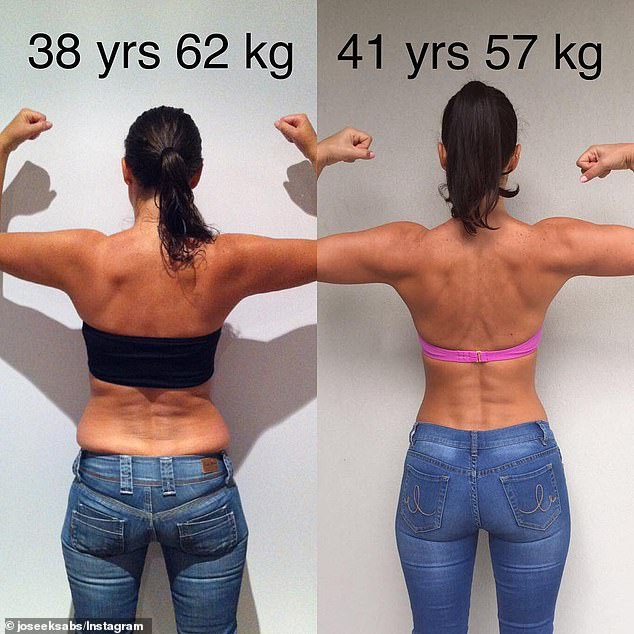 What is an example of her daily meals?

Meal two – Eggs cooked in a simple tomato sauce with chilli, garlic, herbs and some kale.

Snack – A peach and a homemade chocolate cranberry protein bar

‘When I was a bit heavier I didn’t have confidence in myself. My clothes weren’t fitting well, I was very unfit and weak and although I wasn’t big I had very little lean muscle compared to body fat,’ she said.

‘The very first exercise program I did was Jillian Michaels’ 30 day shred which I would recommend to anyone not knowing where to start.

‘It’s one of those programs where you quickly see improvement in your strength and stamina.

‘It took me a while to realise that food was the biggest factor in weight loss though and I set about making small lifestyle changes that would ensure I would be able to maintain my results.

‘I removed the junk food and refined sugar from my diet and eventually gave up dairy as well. I now eat a plant based diet with eggs and have never felt better,’ Joanne said.

As a mum Joanne understands every parents struggle to stay healthy and fit while on the go. So she has invested in a few key workout staples so she can exercise from home. 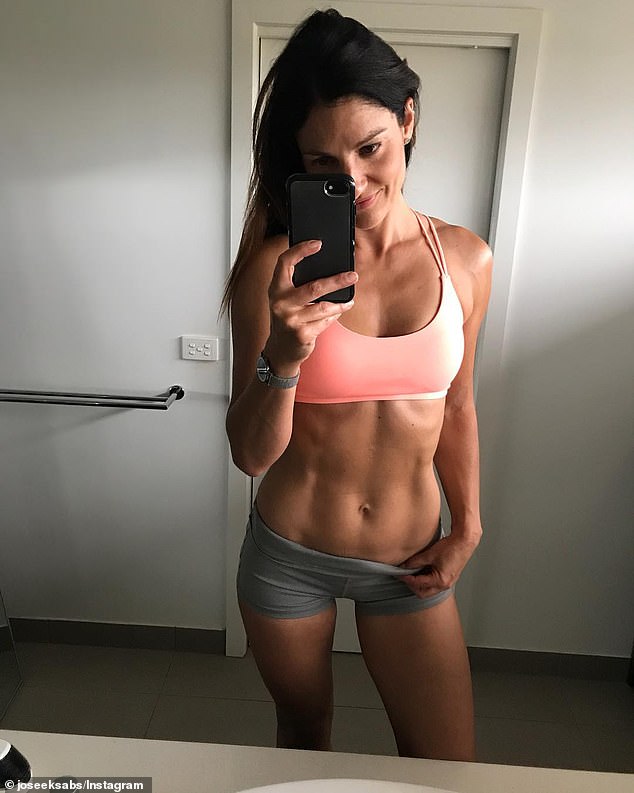 ‘I removed the junk food and refined sugar from my diet and eventually gave up dairy as well. I now eat a plant based diet with eggs and have never felt better,’ Joanne said

‘I used to use the cross trainer back when I loved watching TV as I felt like I was multitasking but now that I hardly ever watch TV… it just doesn’t get used. The dumbbells on the other hand are just true love.

‘I’ve had them for a few years and I use them for pretty much all of my workouts.’

She recommends purchasing hexagonal dumbbells over the round ones because they are ‘more stable’ if you want to use them for things like push ups. 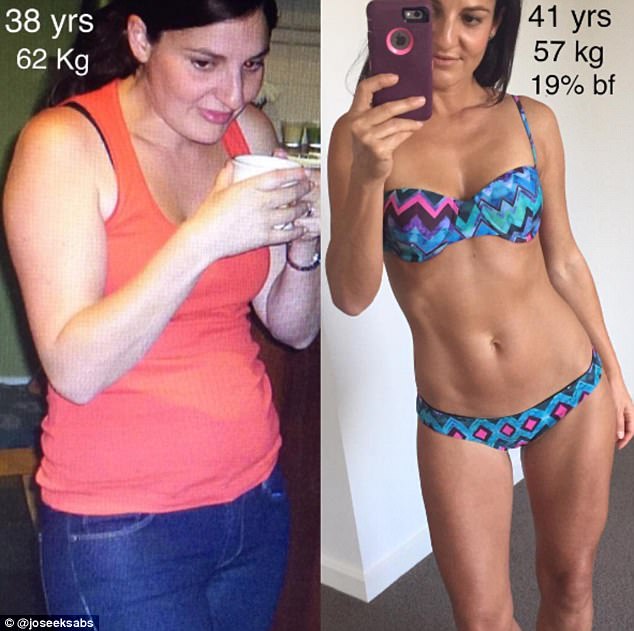 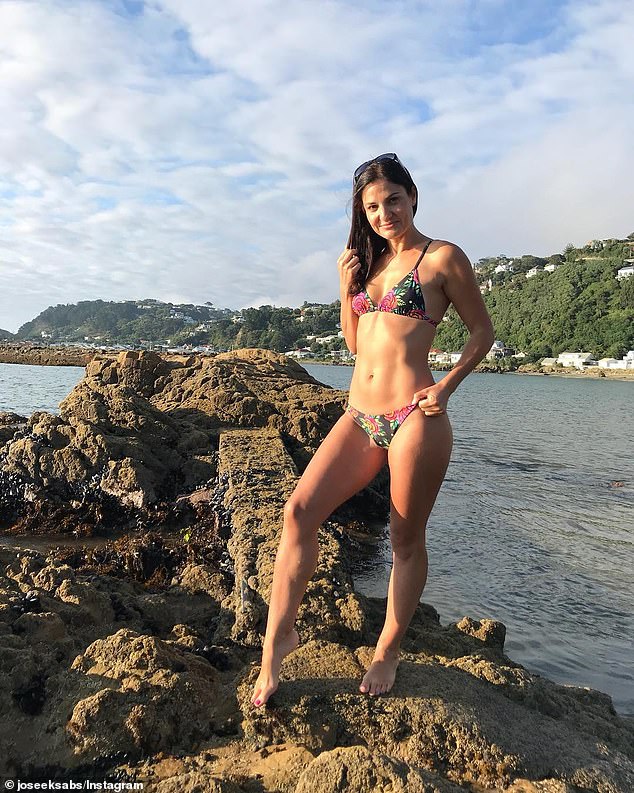 ‘My gloves are from Harbinger and they are a huge must have for me. Not only do they help with grip but they stop me from sliding around so I wear them for pretty much every workout,’ she said.

‘The next most used item would be my ankle weights…. these were $20 off eBay and I got the two kilo ones. I much prefer to go heavy and do less reps rather than have to go forever to feel the burn. I use these for my leg and glute workouts.’

When she’s wanting to leave the house she’ll visit a brick-and-mortar gym to challenge herself.

Joanne is also a huge believer in intermittent fasting. She will ‘fast’ for 16 hours a day and then eat during an eight hour block in the day. It relaxes slightly ‘when life gets in the way’ or she has social plans.

‘I am asleep for most of it but I’ll tend to eat between the hours of 12-8pm. It sounds hard but when your body adapts it becomes easy and you really don’t feel hungry.

‘I don’t count calories or macros and just prefer to eat as many whole foods as I can with a variety of healthy protein, carbs and fats,’ she said.