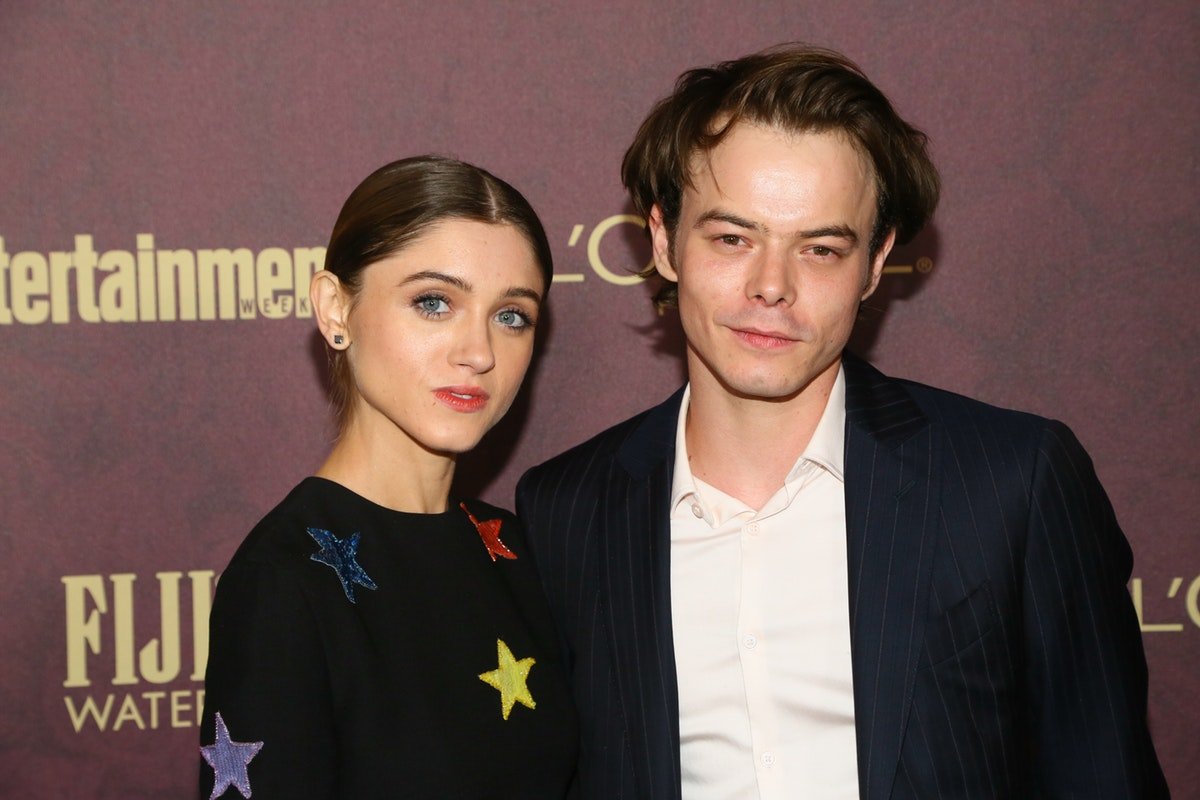 If you’re currently in the throes of Stranger Things fever, trust me: You’re not alone. Season 3 of Netflix’s retro horror original came in hot with vibrant 4th of July aesthetics, iconic ’80s costumes, and hella growth for our beloved characters and couples. One Stranger Things couple worth shipping is Nancy Wheeler, queen of taking no B.S., and the lovably eccentric Jonathan Byers. What’s even cuter is that the actors who play them are dating IRL. Looking back at Natalia Dyer & Charlie Heaton’s relationship timeline, your heart will melt faster than the Mind Flayer.

For many Stranger Things fans, Nancy and Jonathan getting together in Season 2 was everything. (Maybe you were Team Steve and salty about it. And sis, I’m sorry about that!) But it was just so satisfying because — despite Nancy being the classic popular, good girl and Jonathan being more concerned about punk rock and photography than making friends — there was so much chemistry. No high school clique or Demogorgon or gate between worlds was going to stop that!

And as it turns out, no Demogorgon or gate between worlds was going to stop Dyer and Heaton from getting together, either. Here’s a run-down on this cute couple’s relationship history: from on-set romance to being a sweet, stylish couple fans can’t get enough of.

Of course, Dyer and Heaton met on the set of Stranger Things, which filmed in late 2015 and early 2016 in Atlanta, Georgia.

January 2017: They were spotted at LAX and neither confirmed nor denied a relationship 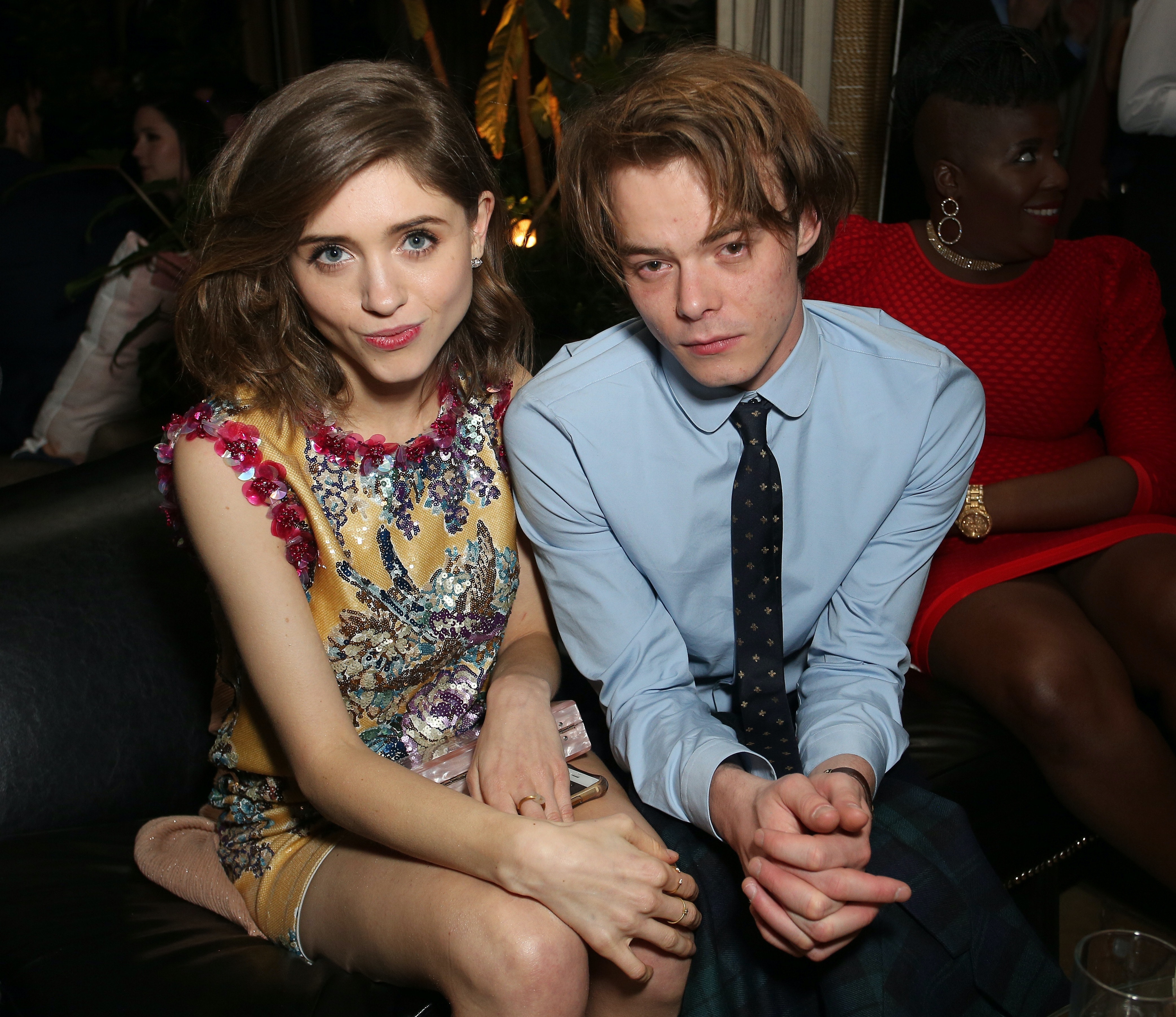 Dyer and Heaton were stopped by The Daily Mail at LAX airport, where a paparazzo asked them questions and implied they were dating. In response, Dyer says, "Whether people are dating or hanging out, I think our cast is just cool with each other."

While out for a stroll in New York City, Dyer and Heaton holding hands caused fans to speculate that they’re dating. At the time, there was no word from either of them about what this hand-holding meant.

There’s Instagram-official, which is cute, but there’s also the ultimate relationship announcement: when you’re red-carpet official. Dyer and Heaton came to slay at the Fashion Awards in London, on December 4, 2017.

Happy 21st birthday! @nattyiceofficial I hope it’s a great one and I’m stoked to be working on this new series with you. I think it’s gonna be great. ????? P.S – Not feeling too well but I still wanna meet you at piedmont park tonight x

Heaton made a cute AF Instagram post for Dyer’s birthday. Literally, what’s not to love about it? Dyer looked absolutely adorable bundled up in her beanie, jacket, and scarf. She also looked super pleased to be holding a big ol’ piece of cake. And likewise, it was sweet to see in the caption how excited Heaton is to work with his bae and how he wants to meet up at Atlanta’s Piedmont Park (even if he’s not feeling too hot). I’m not crying: You’re crying!

January 2018: Dyer opened up about dating Heaton — kind of 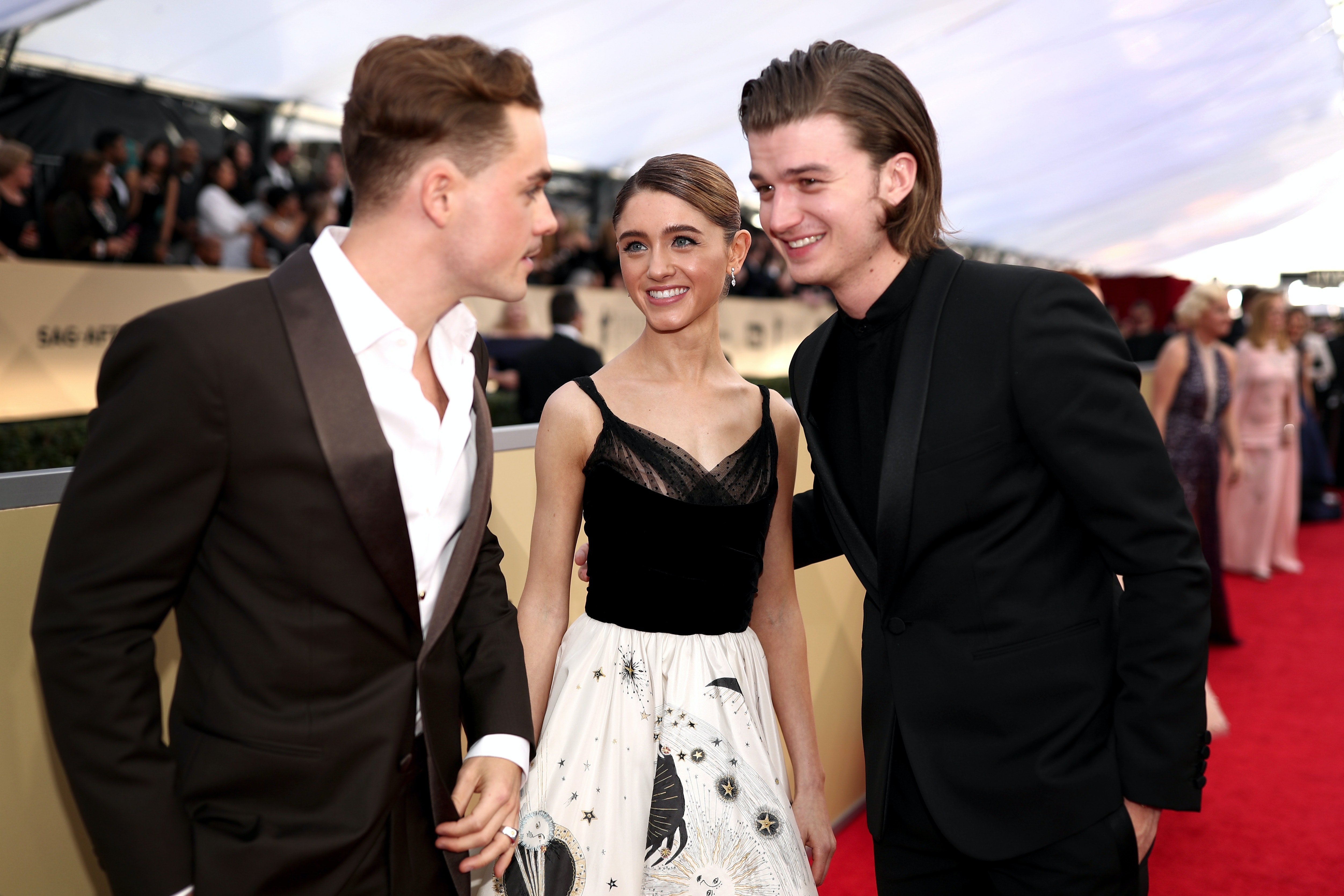 Apart from Dyer’s iconic hand-painted zodiac dress, the 2018 Screen Actor Guild Awards presented an opportunity for Dyer to spill the tea on dating Heaton. When asked by about her boo, Dyer told Us Weekly: 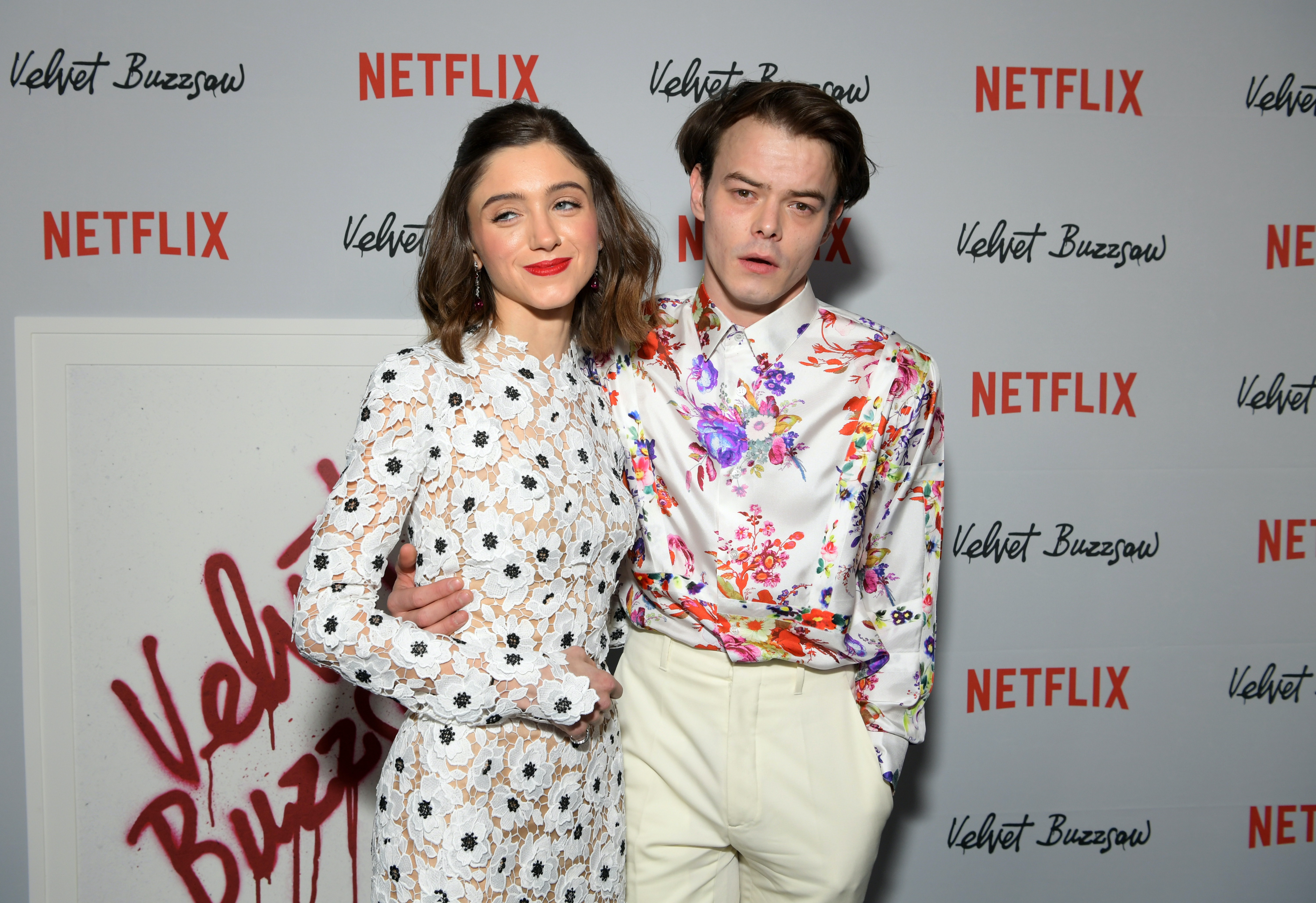 From the Dior Couture Cruise Show in Paris and Sundance Film Festival in Utah, to the premiere of Dyer’s Velvet Buzzsaw, Dyer and Heaton cement their fashion power couple status. 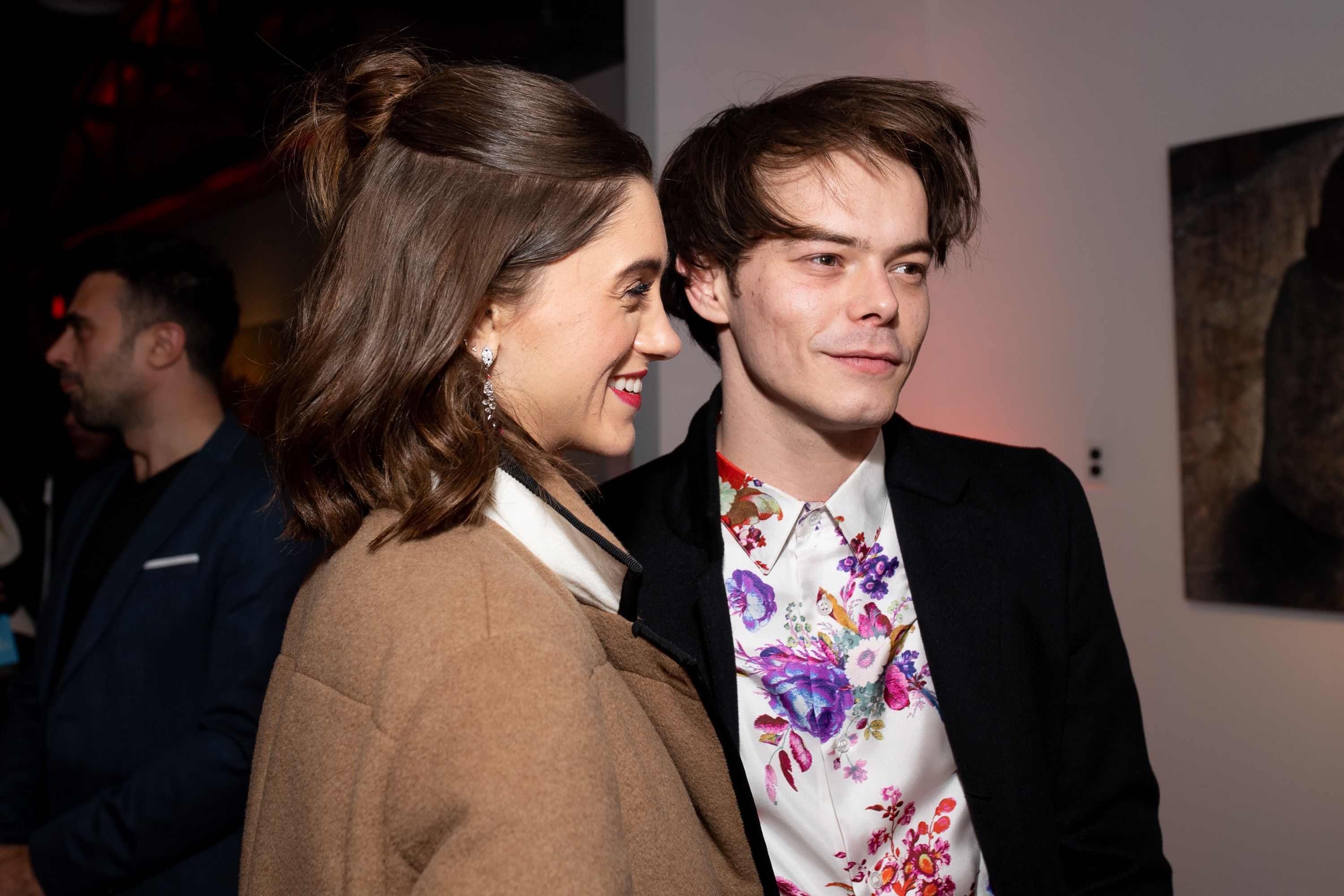 In an interview with Refinery29, Dyer spoke about the upside of dating her co-star, among other things. Dyer said:

She touched on how her Season 1 scenes with Heaton held so much weight, especially when, while filming, she had no idea if she’d have the chance to work with him again. She wrapped up talking about Heaton by explaining that she likes to keep her personal life private. “That’s something important to me — with my family, with my friends — I really like to keep it for me," Dyer told Refinery29.

Celebrities: They’re just like you, including the joy they get out of taking a BuzzFeed quiz. The Stranger Things cast took a quiz to figure out which Stranger Things character they are on the inside. It was cute to see how soft and adoring these two are with each other.

July 5, 2019: The two walked together at the "Stranger Things" Season 3 premiere And of course, Dyer and Heaton were present for the Stranger Things Season 3 premiere in Paris. While the two pose in group flicks for the most part — which is the norm for this super-close cast — there are a couple pics of just Heaton and Dyer together that’s undeniably couple-y.

How nervous would you be answering questions from your SO about your secrets, crushes, and the tea on yourself while hooked up to a lie-detector machine? How about on camera? Heaton and Dyer got super vulnerable for Vanity Fair by doing just that. The video is absolutely adorable and super funny. You see hot takes on little things like fish and chips’ supremacy over hamburgers, and whether Heaton thinks Dyer is more of a Meghan Markle or a Kate Middleton. You also see them reveal their thoughts on English accents vs. American accents, their career choices, astrological compatibility, and whether they’re like their Stranger Things characters.

Both Dyer and Heaton are notoriously private about their personal lives. So it’s cool that fans get this golden nugget of intimacy between their fave on-screen (and off-screen) couple. If anything, it’s heart-warming to know that just as much as we love Nancy and Jonathan, Dyer and Heaton are equally stan-worthy.