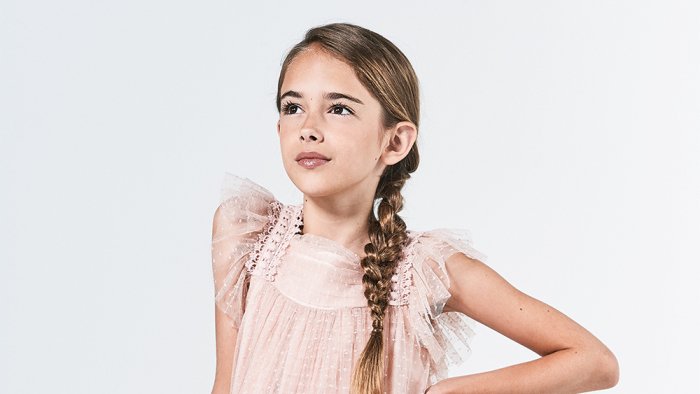 Julia Butters was just 4 when she made her acting debut on an episode of “Criminal Minds.” Six years later, the 10-year-old star of ABC’s “American Housewife” makes the leap to the big screen in Quentin Tarantino’s “Once Upon a Time … in Hollywood.” And what a leap it is. Julia appears in the film in just one scene as a child actor working on a Western with Leonardo DiCaprio’s character, the fading Hollywood star Rick Dalton. She steals the scene as she proceeds to give Rick an impromptu acting class to help him work though his insecurities. Julia says she didn’t know who DiCaprio was before landing the role. “I thought he was a musician,” she jokes. However, the name of DiCaprio’s co-star Brad Pitt did ring a bell.

Did you know who Brad Pitt was?

I just knew him as a “handsome guy,” like when women say, ‘Oh, Brad Pitt. He’s so handsome.’” That’s how I kind of knew his name.

Now what happens when you tell someone you worked with Brad?

I don’t really tell people about it. They mostly find out on their own, and then they shake my shoulders and say, “How handsome is Brad Pitt?” That actually happened — no exaggeration. It was like, “Was he hot? Was he hot?”

How did your audition for the movie come about?

This is what Quentin told me about discovering that I existed. He was writing the script, and he likes to have the TV on while he’s writing, just noise. And my show “American Housewife” came on, and it was a monologue that I was reciting called “Bloody Becky.” I have no idea why he liked that one, but he said, “I should have her audition.” So he auditioned me. We had so much fun. My mom had to leave the room because we were laughing too loud. Then I got a callback. We were sitting in the office. He said, “So I was writing the character in the movie,” and he was about to tell me the story that I just told you, and I go, ‘Oh! You wrote it? Well done. Well done.’ I didn’t know who he was. I didn’t know he was a writer, director and an actor. Then he had my mom read the script in another office.

Were you nervous filming the scene with Leo?

That was my audition scene — I had to learn 21 pages in a week, probably less than a week — so I already kind of knew the lines. But we did have rehearsals. We’d go to the set not even in wardrobe and just run it many times, and that’s when we would get all of the bad takes out of the way so that the good ones would come later.

At one point, you had to get real close to Leo and whisper in his ear, “That was the best acting I’ve ever seen in my whole life.”

He’s such a great actor, so I wasn’t really reciting a line. It was mostly coming from me. It wasn’t anything like, “Oh, my gosh. I’m going to go whisper something in Leonardo DiCaprio’s ear.” It was more like, “I’m going to recite this line and whisper in my friend’s ear.”

Were there any really funny takes?

Did you start laughing? Did you break?