By Henrietta Cook and Clay Lucas

As the coronavirus pandemic upended life across the world last March, almost 900,000 jobs evaporated in Australia – a wipe-out the scale of which has not seen since the Great Depression.

Victoria was hit hard; in 100 days from February, an estimated 188,000 jobs were lost. The country’s harshest and longest lockdowns after a series of deadly outbreaks meant recovery has been slow. 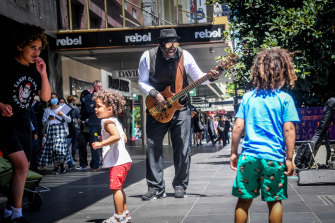 The state government’s initial fears of unemployment skyrocketing to 11 per cent never eventuated due to Australia’s success in combating the virus and stimulus measures. But the Victorian jobless rate is still forecast to remain high – about 6 per cent in a year’s time – and thousands of those who lost jobs remain without one, or with drastically fewer hours. The recovery is a complicated one, with some industries such as aviation, education and tourism still floundering.

The withdrawal of the federal government’s multibillion-dollar JobKeeper wage subsidy and the $150 fortnightly coronavirus supplement, both of which are set to expire at the end of next month, is likely to cause further pain for many.

To capture the stories of Victorians trying to find work, The Age spent time with half-a-dozen people as they dealt with the pandemic’s uncertainty, navigated the welfare system – some for the first time, worried how they would meet the month’s rent or mortgage and found new jobs.

Over the next week The Age will tell their stories.

Day one: the underemployed

“If they’d left the pay where it was, I would have done it.”

Wylie Miller was performing on a cruise ship when the pandemic upended his life.

Miller had long spent six months of the year voyaging the world as a headline act on cruise ships. He had stepped off a ship arriving into Sydney, and was due to travel to New Zealand and on to New Caledonia.

“New Zealand called and said, ‘We aren’t allowing any ships in’,” he says. “The cruise ended right there. We flew back home.”

Miller was among the 15 per cent of arts workers who, during those initial frightening weeks of the pandemic, saw their main source of income disappear.

When Miller returned to Melbourne, there wasn’t much hope of work. On the day he arrived back in his hometown, the city went into its first lockdown.

Like people out of work for the first time in a long time, all over Australia, Miller faced the disorienting prospect of the work he relied on suddenly, and brutally, no longer existing.

“I couldn’t go out and make money. It was so frustrating. I’m not a lazy person. I love doing my job.”

For the first time in his life, the Ohio-born Australian had to rely on government support. He found himself queuing up in a soup line at the Salvos. He found the experience infuriating; he decided he’d rather go hungry than line up again.

“I couldn’t go out and make money. It was so frustrating,” he says. “I’m not a lazy person. I love doing my job.”

The recovery in Victoria has begun – more quickly than many imagined. The state’s unemployment rate stands at 6.3 per cent, an impressive economic recovery from June when the jobless rate hit 7.5 per cent.

“We have a long way to go to get the economy back anywhere close to its full potential,” Dr Stanford says.

Miller is still looking for work, and his fortnightly JobSeeker payment fluctuates depending on how much he earns from busking and gigs, ranging from $300 to $915. Most of it is absorbed by the rent for his North Melbourne apartment, which was reduced following advocacy from housing and homelessness service Launch Housing. 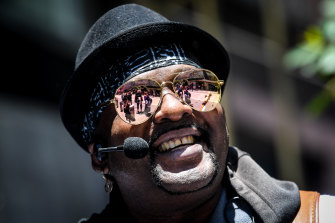 Wylie Miller was offered his old cruise ship job back, but at half the pay. Now he wants to find work helping young people.Credit:Justin McManus

During the toughest months of the lockdown, he fell behind on bills and was unable to afford repairs to his car. “How do they expect me to look for a job when I can’t afford to get the car back on the road?” he asks.

Late last year he found out this period of poverty could have been averted: he was unknowingly still on the books at the cruise ship company and potentially eligible for JobKeeper.

While border closures and customer confidence remain huge obstacles, the cruise ship industry is hoping to rebound after a bruising year.

Miller has been offered his old job back, but the conditions have deteriorated. His pay has been halved and, he’s been asked to work on the cruise ship six days a week for three months at a time. Previously, he worked on the ship for no longer than two weeks at a time.

“They want us to stay on the boat for three months,” he says, shaking his head. “That’s too long. If they had left the pay where it was, I would have done it.”

This worsening of conditions and pay is common during periods of high unemployment, says Tim Kennedy, from the United Workers Union.

“There’s no limit on employers’ ability to access an army of unemployed workers who will step in if a current employee makes a fuss,” he says. This sort of intensification – working harder, with fewer workmates, for the same pay – has become familiar for many who kept their jobs during the pandemic, Kennedy says.

Miller is starting to see Melbourne’s nightlife emerge, but like many Australian musicians, including Bernard Fanning, Missy Higgins and Midnight Oil, believes more government assistance is needed to save the industry.

Even before last week’s snap five-day lockdown, Miller was struggling to land gigs because of capacity limits on venues. Venues are also paying performers less because their revenues are significantly down.

Miller has returned to busking on the streets of the CBD, and recently took advantage of a Melbourne City Council initiative that paid buskers to compensate for the reduced foot traffic.

He sings covers and original funk, hip hop and soul numbers, and bounces across the footpath strumming an electric bass guitar with rainbow strings. He always carries a box of lollipops, which he offers to children who jig alongside him.

“I’m going to put you in a good mood,” he crooned to passers-by on one recent Southbank gig.

Miller was previously employed as a youth motivational speaker for Whitelion, Lighthouse and Melbourne Aboriginal Youth, Sport and Recreation Co-operative and is looking for similar work.

“I want to inspire kids to follow a better direction,” he says. “I’m going to get back in there and make it work. I don’t give up.”