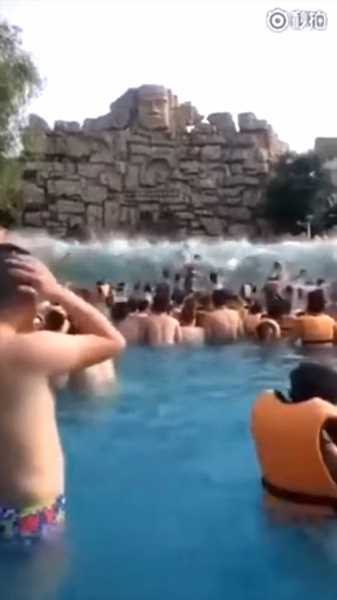 A total of 44 people were injured at a Chinese water park after the ‘tsunami pool’ malfunctioned, causing a sudden and massive tidal wave, officials say.

The South China Morning Post reports the incident occurred at the Yulong Shuiyun Water Amusement Park in the northeastern city of Longjing, near the North Korean border.

Operators at the water park say that five people were hospitalized with injuries including fractured ribs after the incident damaged electronic equipment.

“According to the initial stages of the investigation, the incident was caused by a power cut that damaged electronic equipment in the tsunami pool control room, which led to the waves in the tsunami pool becoming too big and injuring people,” the Longjing city government said in a statement on Tuesday, released on the Chinese social media site, Weibo.

Video of the chaotic scene shows the larger-than-expected tidal wave tossing park-goers around, while children and families can be heard screaming in the background.

An employee at the theme park told the Beijing Time that the incident was caused by an “accidental breakdown in machinery.”

“Online rumors say that a worker wrongly operated the controls, but in reality, it was a problem with the equipment,” the employee said. “The park closed for a day for repairs, but the investigation is over and the park will open as usual tomorrow.”

According to the South China Morning Post, in May, a separate incident occurred where a group of people fell off a ride at the Children’s Garden park in southwest China. Two people died and 12 more were injured after falling off the water slide.