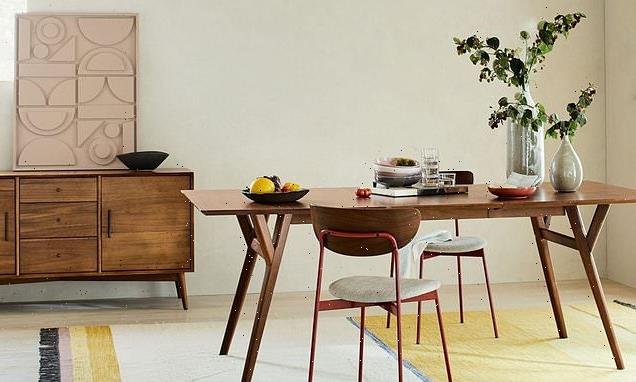 Post-war wonders: Functional, fuss free and understated mid-century designs are seeping back into our homes

For years, mid-century style was regarded as the ugly duckling of design. The furniture and decor of the 1940s to mid-1960s was often seen as cheap, functional or even brutal — no doubt reflecting those lean years.

But there has been a revival in admiration for the era.

‘The appeal of mid-20th-century design is extremely strong because it was a time characterised by Utopian post-war reconstruction,’ says Kurt Kovacs Braidley, gallery manager at design studio Sigmar. 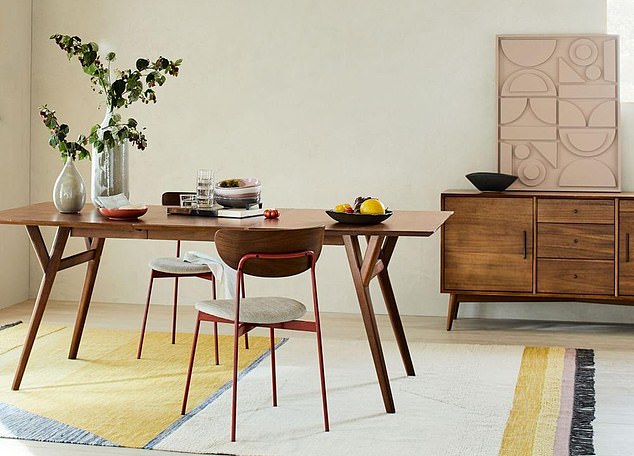 ‘They wanted things to be better than what came before, and the care and attention that was put into the planning and execution of many original vintage pieces can still be felt today.’

The furniture has clean, simple lines and there’s no fussiness or excess. Modern Scandinavian design owes a lot to mid-century American/European style, both often based on metal frames and plywood, keeping the cost down.

If you want an original piece, there are many on the market at auction or from house clearance outlets.

The vintage and antique furniture website Vinterior, meanwhile, has a collection of mid-century pieces including a charming White And Newton teak desk on sale for £396, vinterior.co.uk.

Many manufacturers now produce furniture in the mid-century style. Often, the items will be made using more durable materials than that used 70 years ago.

Solid wood is used instead of plywood and real leather instead of faux as the fake wears away easily.

The Noguchi coffee table, a pond-like piece with a solid-glass top and supports like a mutant tree trunk, is a real talking point.

First produced in 1947 by Herman Miller, perhaps the most influential company of all for mid-century design and still in production. Buy from the Conran shop for £1,990.

Or for a contemporary (and cheaper) approach to the stripped-down style of the era, Hardman Designs’ Marta dining table, with an oak top on metal legs, costs from £639, hardman designs.com.

One classic is the 1956 Eames lounge chair and matching ottoman footstool. It’s a beast of plywood and black leather that makes you look like you’re plotting world domination, but you’re going to be comfy while you do it.

Buy from £8,160, vitra.com. Or take a look at monochrome Ercol sofas — doubtless the inspiration for a dozen Ikea settees.

Where previous sofas had used busy patterned textiles, and were much higher and deeper so that you almost disappeared into them, Ercols are open, low and firm. They are items for families on the move.

The Ercol Cosenza two-seater costs from £1,995, ercol.com, or Ikea’s similar Smedstorp two-seater from £599, ikea.com. Colour-wise, muted oranges, yellow and browns were popular, especially early on in the period, to make the home seem warm and inviting. 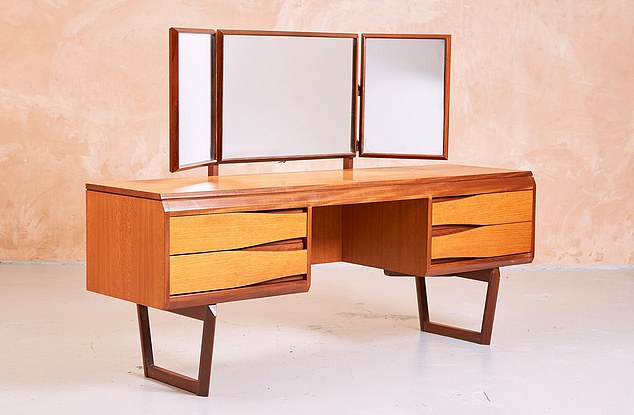 Classic: The White And Newton desk is available at vintage and antique furniture website Vinterior for £396

But as we headed towards the 1960s, more energetic popping colours — pinks and teals — came in.

If you’re not brave enough for the boldest sofa, why not accessorise it with an eye-catching coloured floorlamp? The Mid-Century Tripod from West Elm for £469, westelm.co.uk, looks cool.

The mid-century kitchen is sparse, too. You cook, then take the food out to the dining room. Everything is tidied away in simple units with functional handles or no handles at all.

Declare war on kitchen clutter — an island will help, providing a clear area in the centre of the room.

Jack Trench produces bespoke cabinets in the materials of the time, including wood veneer. Complete kitchens from £50,000 to £150,000, jacktrench.co.uk.

Cheap and low-maintenance vinyl flooring has made a comeback. Carpetright has luxury options from £27 per sqm, carpetright.co.uk.

Or if you want more of a talking point, cork is both soft and hard-wearing; Puretree Cork Heritage tiles from £27 per sq m, puretreecork.com.

If you want to splash out, parquet is inviting and in keeping with the period. Oak parquet from Natural Wood Floor from £72 per sq m, naturalwoodfloor.co.uk.

In search of a relaxing oasis in the bedroom? Built-in storage is key — your clothes and shoes are out of sight, out of mind.

Beds are low down, too, so there’s no space to store abandoned suitcases and winter clothes under them. The Avon range of fitted wardrobes will blend in nicely (from £2,500, hammonds-uk.com).

The era is associated most closely with furniture, but wall colour palettes are just as important.

Simple, neutral paints are in, wallpaper is out (especially with intricate motifs), but you can jazz up your living room with artworks.

Modern abstract works are best so as not to clash with the simple, functional approach to the rest of the room.

Sideboards are in, but keep them discreet and low. They’re there to hold the essentials so that you have lots of room in your home to entertain.

That means you have to tidy your knick-knacks away. Heal’s oak Glide Sideboard has a modern twist on the period for £1,199, heals.com.

Savings of the week! Laundry baskets 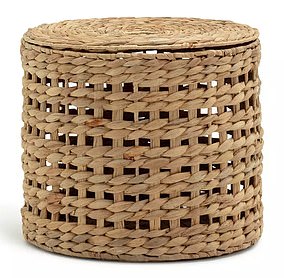 Sustainable: Habitat’s £16.50 basket is woven from the stalks of the water hyacinth plant

Using your washing machine less can help lower energy bills. But you need a large laundry basket or hamper if you are gathering enough clothes for a full load.

The good news is that retailers are catering for this need with attractive baskets at reduced prices that would look good in a bathroom or bedroom.

Take, for example, the Elements Bamboo Basket from Dunelm, which was £30 and is now £21 down 30 per cent (dunelm.com).

At Habitat, you can find a £16.50 basket woven from the stalks of the water hyacinth plant, which is a sustainable material (pictured, habitat.co.uk).

The Range offers the £19.99 Vesgantti bamboo basket, which has two inner compartments for light and dark garments.

It costs £22.99 (therange.co.uk). Robert Dyas has several options that would suit a smaller household including the swish Joseph Joseph two-compartment Tota, in black or grey, which is down from £84.99 to £63.74 (robertdyas.co.uk).

With bargains like these, you will be cleaning up in both senses of the word.