Heather Dubrow was forced to shut down her $36K party during the Dec. 8 episode of ‘RHOC’, when a juicy rumor about her friend reared its ugly head.

Heather Dubrow‘s fancy sushi party, which she admitted cost her $36,000, continued during the Dec. 8 episode of The Real Housewives of Orange County. But before anyone even got to the main entrée portion of the night, which would have been served by the staff from Nobu, things took an ugly turn. In fact, the drama got so bad that Heather stormed up the stairs of her mansion and told her husband, Terry Dubrow, that she was “leaving the show”. 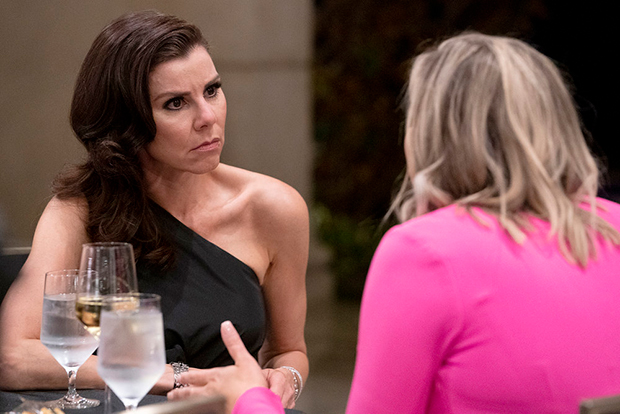 It all started when Gina Kirschenheiter and Emily Simpson tried investigating a juicy rumor about Shannon Beador and Heather’s old friend, Nicole James. Shannon told Gina and Emily that Nicole once tried to sue Terry. And after telling Gina and Emily about Nicole, Shannon then asked them not to say anything to Heather. Shannon tried shutting down the rumor, but Gina felt compelled to reveal the truth to Heather, resulting in an explosive string of arguments that shuts down Heather’s party.

As soon as Heather found out what was going on — Shannon was clearly trying to spread malicious information about her family on national television — Heather told Terry she was “leaving the show”. Fortunately, Terry must have talked Heather into continuing because just a few moments later, she and Terry reappeared and cornered Nicole. They asked her if she had previously tried suing him, and she said yes. She then said it was a big misunderstanding and her agents had pressured her to sue Terry. But because it happened over a decade ago, they all decided to let it go.

After the dust settled, Shannon and Noella Bergener bonded as Heather and her husband Terry wondered about Shannon’s intentions. Shannon tried telling Heather that she’s a “loyal” friend, but Heather yelled in her face and said she’s anything but that. Heather then told Shannon she was “done” with her, so Shannon had no other choice but to leave Heather’s house.

Later, Gina and Emily felt terrible about ruining Heather’s party, so they asked Heather out to lunch and attempted to make amends. Heather accepted their apology for causing drama at her house, and then, she told the ladies that Shannon previously told her not to trust them. They couldn’t believe what they were hearing, and Heather further suggested that Shannon may be jealous of her.