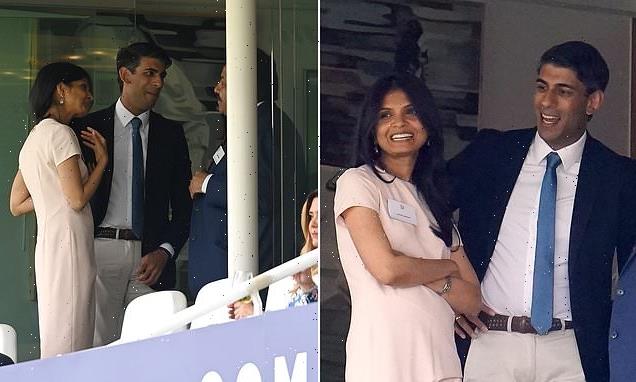 RICHARD LITTLEJOHN: Dishi Rishi’s missus shouldn’t measure up the curtains yet – it’s easy to buy popularity when you are borrowing money to give away

Chancellor Rishi Sunak turned up on breakfast TV yesterday doing his best Lionel Richie impersonation. Once, twice, three times he refused to say whether or not he wanted to succeed Boris Johnson as Prime Minister.

Translation: Of course he does.

The question was prompted by the findings of this newspaper’s poll which showed Dishi Rishi clear favourite to move into No10 once Boris calls it a day. Almost half of voters think the change should happen in the next 12 months. Eleven per cent want Boris to go now.

Is that all? These days the electorate has the attention span of a greenfly. And no electorate is more fickle than the parliamentary Conservative Party.

Having had a year and a half of nothing but Covid, it’s hardly surprising that they’re impatient for politics as usual. And in the case of the Tories, that means plotting against whoever happens to be in charge.

Right now it’s Boris’s turn in the ducking stool. This time next year, Rodney, it could well be Sunak.

So the Chancellor is probably wise to sidestep questions about his ambitions. What was he supposed to say: ‘Damn right I want to be PM. The sooner Boris walks the plank the better’? 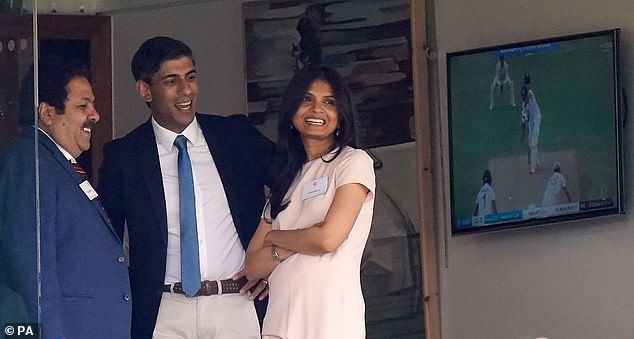 Chancellor Rishi Sunak (centre with wife Akshata Murthy, right) turned up on breakfast TV yesterday doing his best Lionel Richie impersonation. Once, twice, three times he refused to say whether or not he wanted to succeed Boris Johnson as Prime Minister 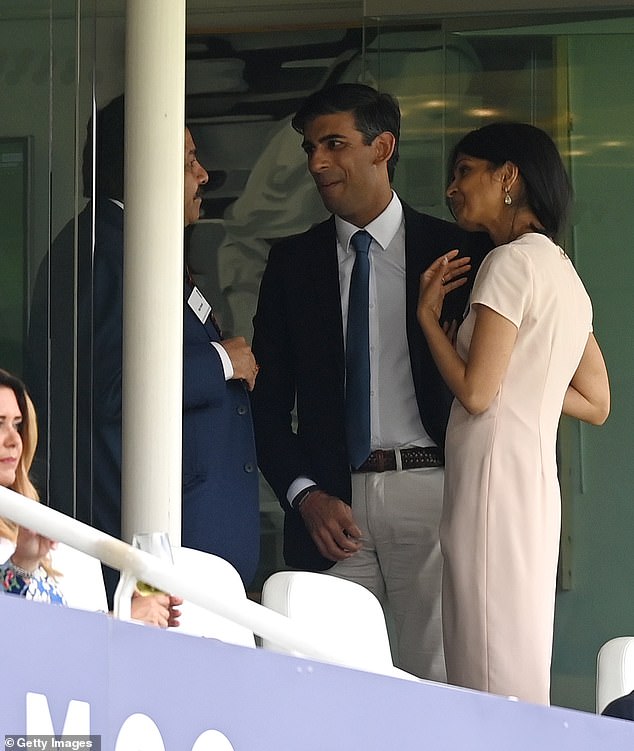 Right now it’s Boris’s turn in the ducking stool. This time next year, Rodney, it could well be Sunak. Pictured: Sunak with his wife Akshata Murthy

In the scheme of things, schtum was his only option. Whatever other qualities he might possess, he doesn’t have Boris’s quick-thinking turn of phrase.

When the same question was put to Johnson during Mother Theresa’s disastrous tenure, he came over all innocent but added a mischievous caveat about what might happen were the ball accidentally to emerge from the back of the scrum…

The Boys In The Bubble are always looking for the next best thing, so it’s hardly surprising they seized on Sunak’s non- denial. With Parliament in recess until after the schools go back, they’ve got to find something to write about.

Thus we are told that various MPs are ‘on manoeuvres’. Don’t you just love the language?

It’s the middle of August and after 18 months of idleness — sorry ‘working from home’ via Zoom — most Tory MPs are on manoeuvres in Devon, Norfolk, Northumberland, Pembrokeshire, and in the case of Liz Truss, Barbados (allegedly).

Obviously Captain Tobias Wilcox’s Coconut Airways are still flying, even if most of the main airlines remain grounded.

Climate change secretary Alok Sharma has been on manoeuvres in 30 different countries since January — everywhere from Brazil to Indonesia. And unlike the rest of us he hasn’t had to self-isolate on his return or pay an arm and a leg for rip-off PCR tests. The one place MPs are not on manoeuvres is Westminster.

Instead of knocking off for the summer, Parliament should have been required to remain in emergency session with a full house, not a socially-distanced, skeleton scattering of bodies on the backbenches.

While we remain in semi-lockdown limbo, MPs should be subjecting every cough and spit of Covid-inspired policy to forensic scrutiny, instead of packing their buckets and spades and camping equipment and heading off on holiday for the duration.

Despite the Chancellor’s confidence in a strong recovery, every day which passes sees more businesses going to the wall and more jobs lost. 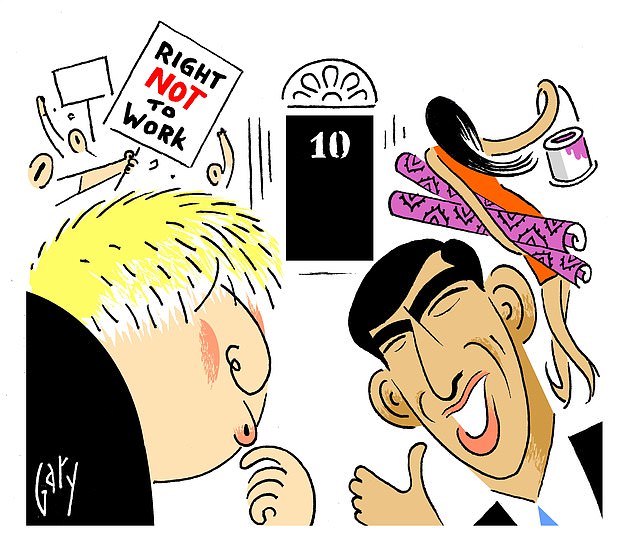 Maybe Dishi Rishi’s time will come. But for now, he should be careful what he wishes for

Which brings us back to Boris v Rishi. No wonder Sunak is currently seen as the Tories’ ‘golden boy’ and a PM-in-waiting. It’s easy to buy popularity when you are borrowing money to give away.

Rishi has rightly been praised for preserving jobs and keeping the economy afloat. But the end of furlough next month could still lead to hundreds of thousands of people discovering they haven’t got a job to go back to — as this column has been warning for more than a year.

Yesterday the TUC called for a ‘Daughter Of Furlough’ (you can tell they’ve got a female general secretary). The unions want the unemployed to receive 80 per cent of their wages from the taxpayer in perpetuity.

Meanwhile, the teaching unions aim to keep the schools shut and the civil service unions say their members must not be forced to return to the office — despite the fact that basic services such as issuing driving licences are in total disarray. It takes ten weeks to get a passport, if you’re lucky. And try getting the DVLA to answer the phone.

Some of us remember the ‘Right To Work’ marches of the 1980s. Today, the unions are demanding the right not to go to work.

Who can blame them when for the past 18 months, Rishi has given the impression that the Government will always provide.

The moment he ends furlough and attempts to recoup the borrowed billions through tax rises and tighter public spending, he can expect a barrage of abuse along the lines of ‘typical heartless Tory cuts’. The BBC will lead every bulletin with heart-rending reports on the casualties of ‘austerity’.

How will his popularity hold up then? We still don’t know whether he’s any good as a Chancellor. He’s never delivered a proper Budget. His first was cancelled because of Covid.

Rishi’s image is fashioned upon a carefully cultivated social media presence and his recent ability to hose down the country with free money.

Strip that away and all that’s left is someone who looks like a 12-year-old boy in Norman Wisdom’s suit.

As for Boris, he’s a known quantity. Maybe the bumbling buffoon act is wearing thin, but he has always had bouncebackability. Like Kenny from South Park, you can’t kill him for long.

The notion that he’s had enough is pure speculation, wishful thinking. Even if he is flagging — who wouldn’t be after what he’s been though, including near death? — that doesn’t mean he’s ready to throw in the towel.

More to the point, does anyone seriously believe Carrie Antoinette would let him retire hurt?

Five minutes ago, she was just another Central Office temptress handing out election leaflets. Today she’s playing at First Lady, front and centre stage at world summits, holding hands on the beach with Mrs Merkin and Jill Biden. 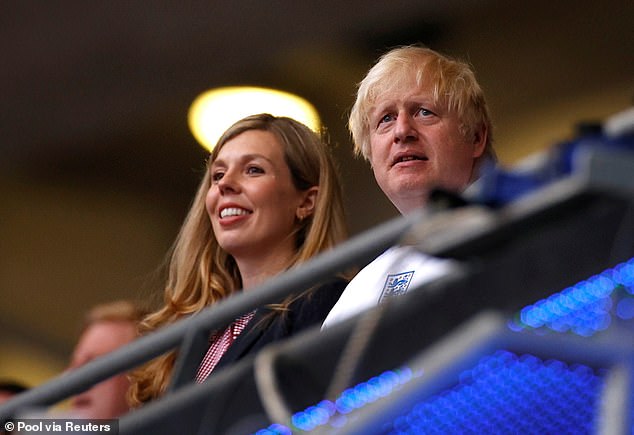 The notion that Boris has had enough is pure speculation, wishful thinking. Even if he is flagging — who wouldn’t be after what he’s been though, including near death? — that doesn’t mean he’s ready to throw in the towel. Pictured: Boris Johnson (left) and his wife Carrie at the Euros Final

She’s free to redecorate Downing Street in her own distinctive style, like Lady Grantham in Downton Abbey. So Rishi’s missus shouldn’t start measuring up the curtains just yet.

As they say on all the best reality shows, Carrie’s living the dream. Does anyone seriously think she’s going to give that up in a hurry?

We keep being told that Boris is boracic and needs to make some serious money. So no change there, then. But there’s no rush.

The serious money isn’t going away. The banks will grant him an overdraft against the riches he can expect when he does eventually leave No10.

We learned this week that Mrs May has copped £2million-plus in speaking fees from assorted corporations and institutions. Yet her most famous speech was punctuated by a coughing fit while the set fell down around her. She is to public speaking what Tommy Cooper was to magic.

If there are mugs prepared to pay two mill to hang on her every word, and if Call Me Dave can score seven million quid for writing to Matt Hancock, then the sky’s the limit for Boris.

He may never match Tony Blair’s post-politics fortune, but he’s set up for life regardless. So he need be in no hurry to cash in now.

The stuff I enjoyed most in our poll was the small print, not the politics. While voters trust Sunak to pay them back a £20 loan, look after their dog and fix a wobbly shelf, they’d still rather go to the pub with Boris.

Remarkably, given his reputation as a flying swordsman to rival D’Artagnan, 21 per cent of men say they’d be happy for their wife to have dinner with Boris.

My guess is that the number of wives who’d love to have dinner with Boris would be at least double that. And whatever Amber Rudd once said, plenty of them would be more than happy for BoJo to drive them home afterwards.

Tory MPs may be getting restless, but for all his faults, Boris still has the ability to reach the parts other politicians can’t, and remains their best bet of keeping their seats at the next election.

As for Dishi Rishi, maybe his time will come. But for now, he should be careful what he wishes for.