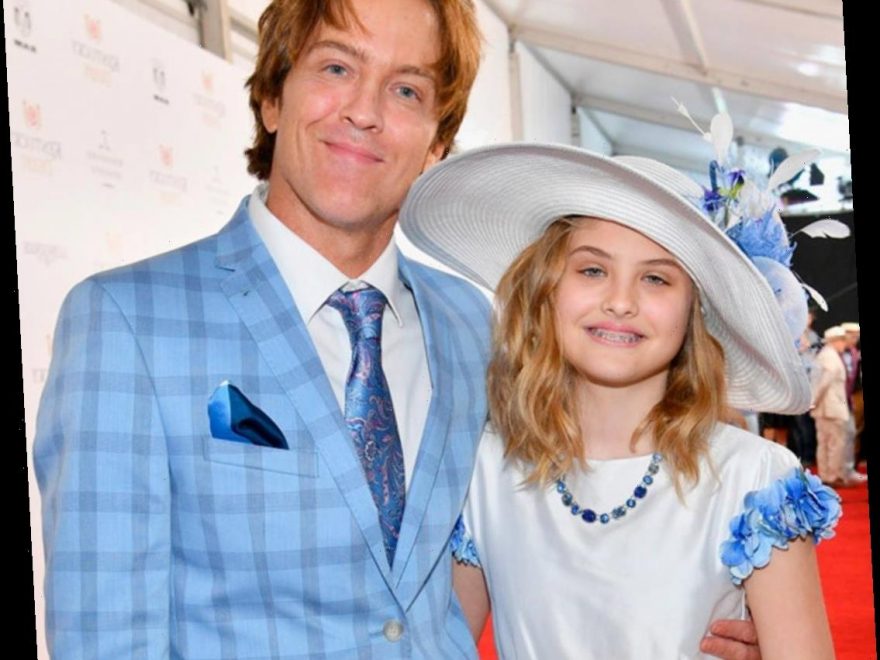 Perhaps it's fitting how much Dannielynn Birkhead loves rollercoasters when you consider the tedious climbs and sharp descents that marked her first year of life.

There was the untimely passing of half-brother Daniel Smith, who overdosed while visiting mom Anna Nicole Smith and her newborn daughter in a Bahamian hospital, and the eerily similar death of the larger-than-life former Playboy model just months later.

And, of course, the custody circus that ensued with freelance photographer Larry Birkhead, Smith's attorney Howard K. Stern and even Zsa Zsa Gabor's husband Frédéric Prinz von Anhalt staking their claim for the 5-month-old. The weeks-long spectacle finally ended in April 2007 with Larry, paternity results in hand, stepping outside the Nassau courthouse to tell the reporters, photographers and curious locals that gathered, "I hate to be the one to say this but…I told you so."

So the fact that Larry now describes his little girl as fearless, the type of person who embraces all the twists, turns and heart-dropping falls that come her way? Yeah, that checks out.

Of course, these days, Larry works hard to ensure Dannielynn's only rollercoaster rides are of the literal variety.

Despite the stranger-than-fiction events surrounding her birth and first few months, the newly minted high schooler leads a life that's, by all accounts, fairly standard. At their 10,000-square-foot Kentucky home, she has a pet lizard, practices the violin, makes homemade slime and argues with Dad about how much time she spends on her cell phone. (She's obsessed with Snapchat, obvs.)

But the two are still tight enough to plan joint Halloween costumes (in 2018 they chose an Exorcist theme), enjoy family trips to Dollywood and Walt Disney World and make their yearly pilgrimage to the Kentucky Derby. Though, of course, they celebrated this year's race from home due to the COVID-19 pandemic, the rescheduled event occurring just two days before Dannielynn's 14th birthday today.

And they never miss a moment to discuss the legacy that Anna Nicole left behind. Though they usually mark the February anniversary of her death with cake and his best stories, "In our house, every day is Anna day," he told E! News in 2019. "We talk about her and remember her all the time."

Like most parents, especially single ones, the University of Louisville alum, 47, says his days are filled vacillating between various roles. "Sometimes you feel like a bodyguard, sometimes you feel like a chauffeur," he joked to Us Weekly in 2017. "It depends on what the day is. But my job is dad and I think I've done a pretty good job. She's adjusted to it and she's just a normal kid."

Thrust into fatherhood with one DNA test, Larry made some snap decisions to give his daughter a life befitting your standard kid rather than the fishbowl-like existence some celebrity offspring are subjected to. His first move was to his hometown of Louisville, some 2,000 miles removed from Hollywood's glare. "It takes away the chase," he said on the Today Show in 2016 of life in the Midwest, "it takes away the curiosity, it takes away the false stories."

In Kentucky, "life has been really great and quiet by design," he told E! News. "It's given Dannielynn a great foundation, too. She is concentrating on school and has even made the Honor Roll!"

It's the type of milestone he might casually mention to Howard K. Stern, the former foes now actually pretty close. As Larry tells it, the dueling dads quickly realized it was time to behave as the grown-ups in the situation and Anna Nicole's former lawyer and lover swiftly dropped any custodial claims. "He just said, 'Look, you've got to get strong. You've got to be there for Dannielynn,'" Larry recalled in an interview with ABC News' 20/20 last year. "The minute after the paternity test was over…he's helping me change Dannielynn's diaper, [showing me], 'This is how you feed her,'…it's been nonstop since then."

The pair have maintained their relationship, a once tentative friendship transitioning into a real bond. "We work together on stuff all the time," Larry told E! News. "He gives advice and reaches out to us. Some people may think it's weird, but he's a good friend and has been real supportive."

As for Larry, his paternal instincts kicked in pretty quickly and he learned to listen to his gut.

Like the time Guess approached asking if his then-6-year-old daughter would like to pose for the brand that made her mom a household name. Defending himself from critics who were quick to cry exploitation, Larry explained the stint was more about connecting with the mother she never knew than testing out future career opportunities. "Dannielynn has always looked up to her mom's image and…I think that this is kind of Dannielynn's way of paying tribute to her mom in her own special way," he said on Good Morning America in 2012. "To see her mom's picture next to hers as a Guess girl and say, 'Hey, I was a Guess Kids girl, my mommy was a Guess girl,' that might be her only connection with her mom."

And to this day, it remains a one-off gig. "I've had companies call me since then and ask me for her to model," he's shared, "and the answer is no. She doesn't show any interest in it. She wants to be a kid."

Though, as of late, the ninth grader has displayed a penchant for acting. "I got an email from her teacher [that] said, 'Dannielynn gave one of the most believable performances of the whole entire school that was in the play,'" he revealed to Jesse Palmer in a September 2019 interview with Daily Mail TV. "If she wants to do something like that when she's older, I'll have my own opinion about it."

For now, though, she's just enjoying the school theater scene, saying it's "really cool" to take on a different identity: "It's like portraying a new person. It's fun."

Because, of course, there are moments when it's clear she's not your average tween, like when she spots herself on the cover of a tabloid in the supermarket checkout line or asks just one more time, "Daaaaadddd, why can't I have a YouTube channel?" While the other kids in her class can simply goof around on the video-sharing site or fantasize about the type of clip that might help them go viral, Larry has to remind his daughter that anything she posted would get massive traction. "I still have to warn her that, you know, your friend might have a YouTube account, but if you have a YouTube account that's different," he told Us Weekly, "because people know who you are."

Instead, she frequents the site for makeup tutorials and dreams of one day starting her own cosmetics or clothing line.

But much like any protective father worried about the unknowns his daughter could encounter on the web, Larry limits her access to the Internet, posts liberally to their shared Instagram account and avoids most public appearances, save for, of course, when the Kentucky Derby comes to town. The main event, and the Barnstable Brown Party the night before are traditions, both because it's the same bash where Larry first connected with Smith and, well, because it's close to home and a lot of fun. "She's my good luck charm," he told E! News at the 2015 event. "She picks all the winners."

If Dannielynn had her way, Dad would find a winner of his own. One of her favorite activities involves floating prospective dates for Dad. "Dannielynn tries to hook me up," he told E! News back in 2013. "She is a matchmaker."

It's not just that she wants to see her father happy and in love more than a decade after his two-year on-off dalliance with Anna Nicole ended, though she does. The way Larry sees it, she's simply craving another female figure in her life.

And it not like he's uninterested in finding love…

"I've been on a few dates," he insisted to E! News, "but I'm not on dating sites or anything like that!" Though the photographer and house flipper willingly signed on for a stint on The Millionaire Matchmaker back in 2014 it's just hard to date as a single parent. Tougher still when prospective girlfriends know every last detail about your ex.

And conversations about Anna Nicole are something he'd prefer to leave between him and his little girl.

They've certainly had some awkward ones, like the time Dannielynn asked why her Wikipedia page says her surname was Stern when she was a baby. Really any time you're discussing your Wikipedia page, you've ventured far away from the standard father-daughter talking topics.

But mostly Larry likes to keep his explanations of Anna Nicole and her passing as light as possible. "The way I've told Dannielynn in the past is that, 'Your mom took some medicines and she…might not [have] taken them correctly or the right way, and the doctors couldn't help her, and they tried," he explained to 20/20.

As for anything she might discover on her own, "I have a block on her [computer]," he told Wendy Williams in 2017. "We sit down and I have a talk with her and I say, 'You're going to see these things about your mom and not everything is true." He sees each chat as a learning opportunity: "I take a little bit of Anna's life and I put it into lessons."

It's undeniable that the teenager misses the mom she never knew, that she craves a fuller house so much that she once handed Larry a stack of adoption brochures and told him, "Just surprise me when you get home. Bring the best one home." But she also seems to have accepted the idea that she has a different type of relationship with her mom.

She sees her in the Anna Nicole-crafted portrait that hangs in her Peter Pan-themed bedroom, in the butterflies that chase her around (a family friend having once told her any she spots were sent down by her mother) and sometimes she quite literally sees her on camera. Watching Anna Nicole's "My Heart Belongs to Daddy" music video, reveals Larry, "She'll shout to the TV, 'Slay, Queen, slay!'"

Her backstory is a lot for anyone to handle, much less a 14-year-old who has to worry about things like passing math, navigating a new high school social scene and whether or not boys are gross. So outside of a sojourn they made to the Bahamas in late 2017 to mark what would have been Smith's 50th birthday, Larry works to keep the focus on homework, video games and Girl Scout meetings.

"She's a good kid," he said, "and we laugh and have the best times and she wears me out."

Because, much like Mom, she sprints toward life with no fears, ready to roll with the ups, the downs and the loop-the-loops. "I'm going on amusement park roller coasters doing 200-foot drops holding on to her and she says, 'I told you the last time, do not hold on to me!'" he marveled. "Sometimes you just have to say, 'I gotta let you go and become your own person.' You can only do so much. Sometimes I'm amazed by the way she handles things."