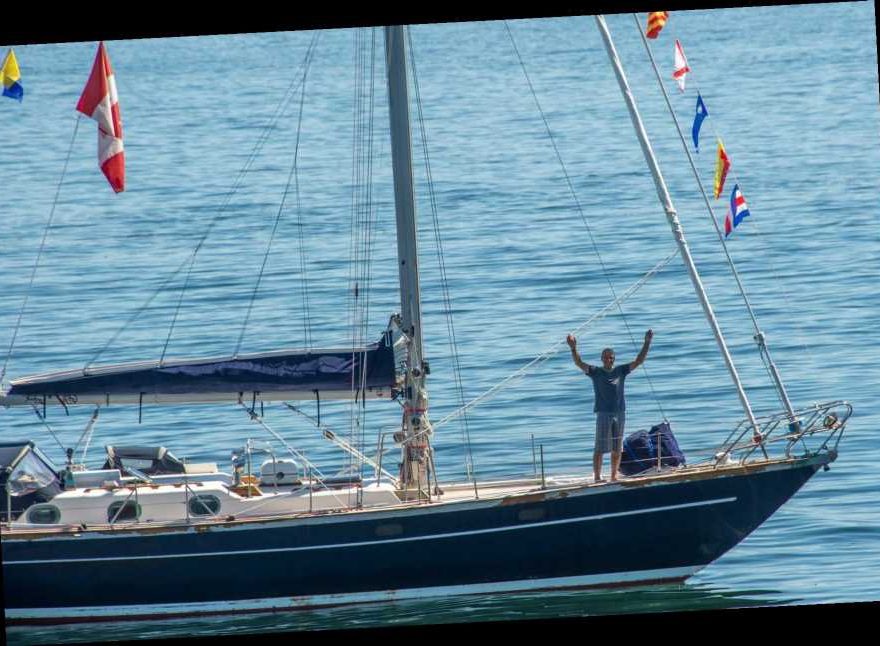 A Canadian man has made history after becoming the first person in North America (and the eighth person in the world) to complete a solo sailing expedition around the globe without the use of any GPS or electronic assistance.

Bert ter Hart first embarked on his journey on his boat, the Seaburban, in October 2019. After spending 265 days at sea, during which he relied solely on celestial navigation, the British Columbia resident returned home this July, Travel + Leisure reported.

"So the sense of accomplishment — I don’t have one because I'm in this weird temporal space right now where I just left yesterday," he added.

To keep track of where he was going during the voyage, ter Hart said he relied on a sextant, log tables, pen and paper — traditional methods that he felt were the closest way for him to experience what it was like to sail centuries ago. "I’ve always been fascinated by the early explorers," he explained to Travel + Leisure. "One of the most profound ways you can experience what explorers and early sailors experienced is to use a sextant. The boats are different, the sailcloth is different, the clothing is, of course, vastly different."

"Everything is different except figuring out where you are because they did it exactly the same way," he continued. "And you’ll have exactly the same anxieties: Am I where I think I am? Is land going to show up where it’s supposed to be? That part of the experience, you can relive almost exactly because you’re using technology that hasn’t changed since the 1700s."

But using traditional methods also presented its challenges, as ter Hart admitted that it took him two to three hours per day to determine his location because using a sextant requires a view of the horizon.

"When you're at sea in a small boat, there's always waves — and the swell can be anywhere from 12 to 15 feet," he explained to Travel + Leisure. "The motion is so extreme… the boat is tilted at some crazy angle, it’s going up and down, and rolling from side to side. If I were to put a pencil down, five seconds later, that pencil is in a completely different part of the boat." Along with rocky waters, ter Hart told the outlet that he experienced hurricane winds, which were "mentally draining" and sounded like "a hundred people outside with sledgehammers, just pounding every square inch of the boat."

"Imagine driving down the highway at 80 miles an hour, and sticking your entire body outside the car window, and you’ll get a pretty good idea of what it’s like to stand outside on the boat when it’s blowing that hard," he said. "The wind is screaming, and every now and then, a wave will break over, and the boat is mostly underwater."

Because of that, the sailor had difficulty falling asleep and would typically average about four hours of sleep per day while being strapped down with a seatbelt, Travel + Leisure reported. He also struggled with his food supply, limiting himself to just 800 calories per day at one point to ensure he would have enough food for the rest of the journey.

Despite those challenges, ter Hart — who was referred to as "The Safest Man on the Planet" amid the coronavirus pandemic — described his solo journey as "magical," according to the outlet. When he finally reached his destination of Victoria in July, ter Hart was welcomed by loved ones — who kept him up to date with the ongoing pandemic — and spared quarantine requirements by border patrol, the outlet reported.

"The closer I was getting to home, the more anxious I became," he recalled. "Suddenly, I have to step back into a world that I don’t know. The world I left is totally different than the world I came back to. I didn’t know how I would fit in [and] how I would view everything from a social, political, or economic perspective."

As he reflected on his journey, ter Hart told Travel + Leisure he hopes others who may be interested in exploring the world will follow his lead.

"I wanted to inspire people to take that first step forward in realizing whatever dreams or adventures they might have. Once you take that first step, the next step is easier, and the step after that becomes easier. And pretty soon, you’re living your dream — whatever that may be, big or small," he said.

"If you’re just willing to look and get off the beaten path a little, you can have some of the most extraordinary experiences in your life," he added.

As information about the coronavirus pandemic rapidly changes, PEOPLE is committed to providing the most recent data in our coverage. Some of the information in this story may have changed after publication. For the latest on COVID-19, readers are encouraged to use online resources from WHO and local public health departments. PEOPLE has partnered with GoFundMe to raise money for the COVID-19 Relief Fund, a GoFundMe.org fundraiser to support everything from frontline responders to families in need, as well as organizations helping communities. For more information or to donate, click here.