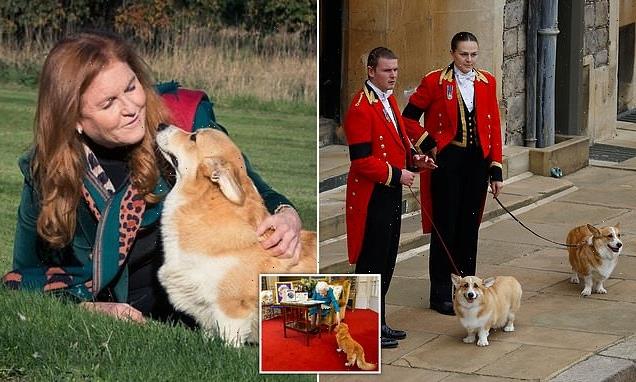 Sarah Ferguson has marked her 62nd birthday by posting heartwarming pictures of her snuggling up with The Queen’s corgis – calling Muick and Sandy the ‘present that keeps on giving’.

The Duchess of York adopted the animals with her ex-husband Prince Andrew, 62, after the monarch’s death last month, and now cares for the two dogs at their Royal Lodge home near Windsor Castle.

This morning, the mother-of-two posted a series of photos with her 392,000 Instagram followers from one of their recent walks around the royal estate.

In her first post, Sarah was pictured lying down on the grass as the Queen’s two beloved dogs stood side-by-side next to her. 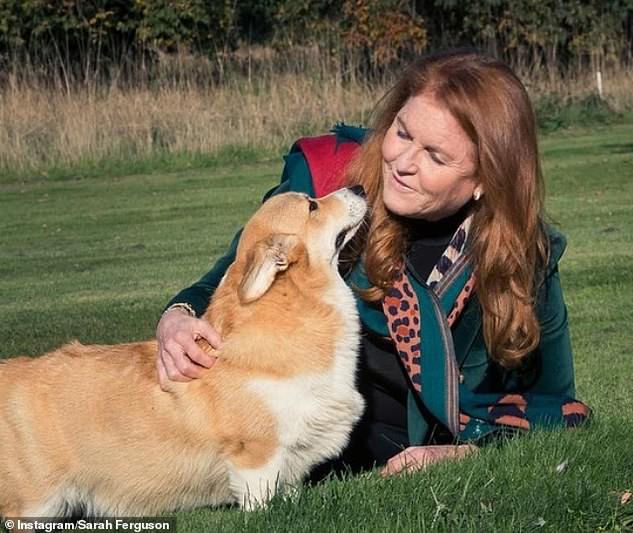 ‘The presents that keeps giving…’: Sarah Ferguson (pictured) posted a series of heartwarming photos with the Queen’s corgis on the morning of her 62nd birthday 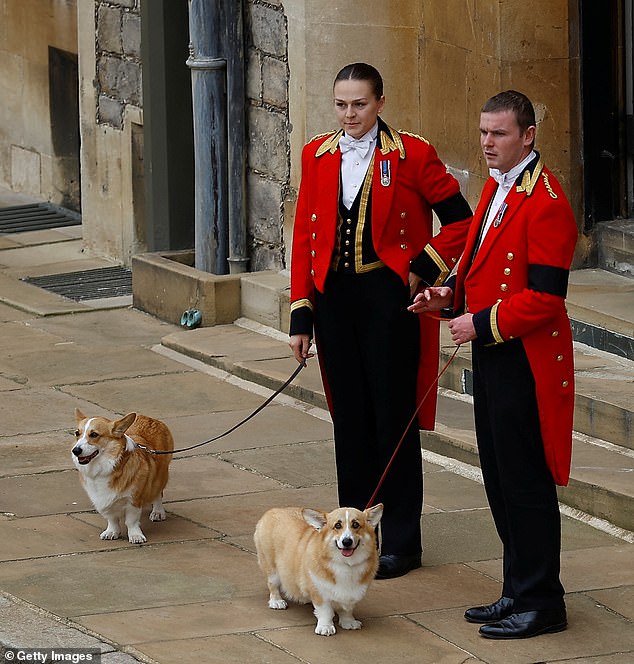 The two corgis, Sandy and Muick (pictured) touched people’s hearts when they were spotted outside Windsor Castle waiting for the processional of the Queen’s coffin following her Westminster Abbey funeral 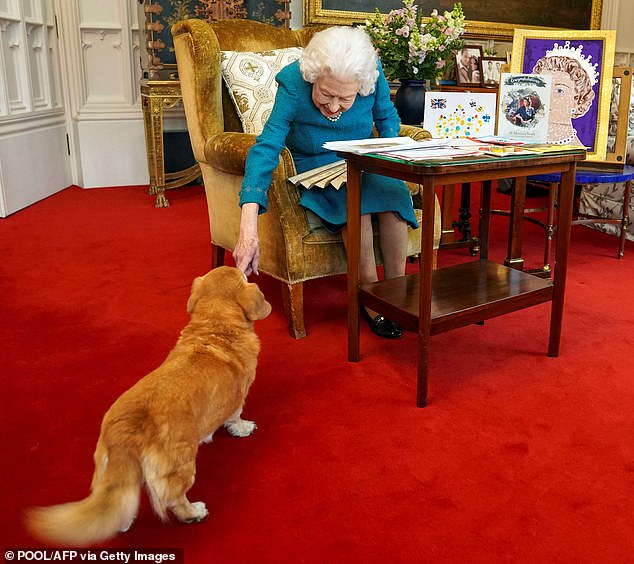 Her Majesty’s love of corgis was well-known, and after she was gifted one of the dogs for her 18th birthday, she kept the breed for the rest of her life

She captioned the image: ‘The presents that keep giving…’

The Duchess then went on to share a carousel of five more pictures – showing the dogs enjoying a cuddle with their new owner.

As well as sending Sarah well wishes on her birthday, followers were thrilled to see the dogs being so well looked after.

‘How heartbreakingly beautiful,’ one fan commented. ‘They are in safe, gentle hands with Sarah.’ 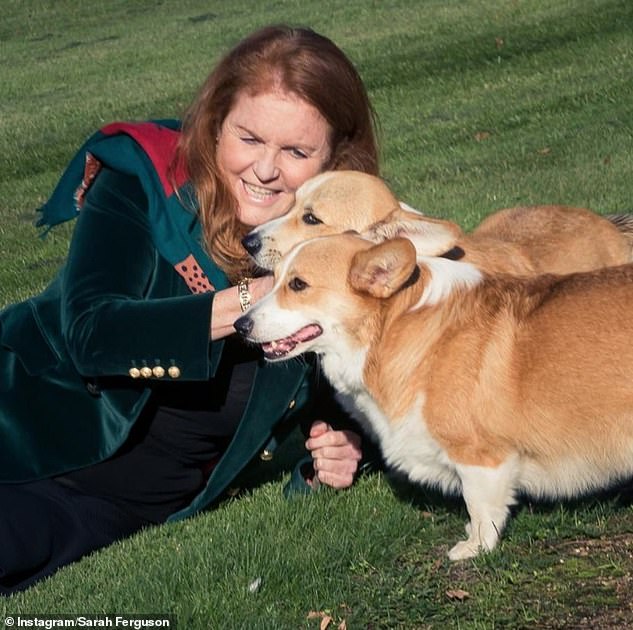 Royal fans were thrilled to see the dogs being so well looked after. Muick and Sandy now live with Sarah and Andrew at Royal Lodge in Windsor 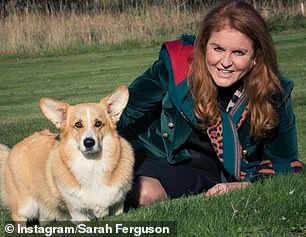 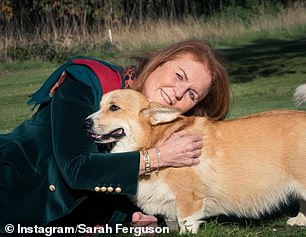 In the snaps, which are thought to have been taken at her home of the Royal Lodge in Windsor, the Duchess of York could be seen frolicking on the grass with the dogs (pictured)

‘I’m so glad they both are with you now, Sarah,’ another added. ‘Poor babies.’

‘Please keep us updated about them,’ a third wrote. ‘Good to see they are doing fine.’

Earlier this month, the Duchess said that being asked to take care of Sandy and Muick has been a ‘big honour’, according to the Telegraph.

Speaking at the Henley Literary Festival, Sarah said that she’s well aware that the two new additions to her household are ‘national treasures’ who have been ‘trained well’.

As Sarah and Andrew already shared five Norfolk terriers, the two corgis have had to integrate with them. 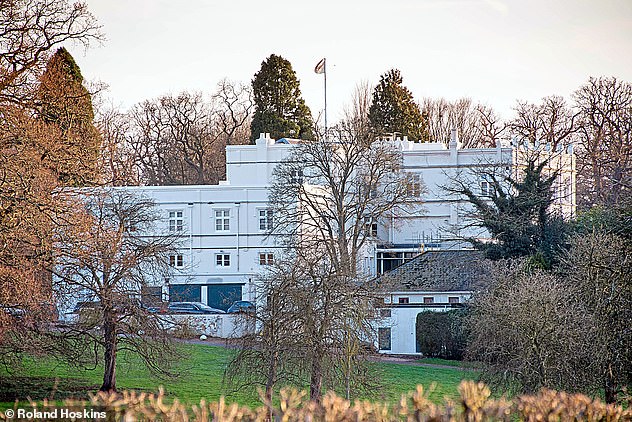 She said: ‘They all balance out, the carpet moves as I move but I’ve got used to it now.’

The dogs had been a gift to the Queen from Andrew and his daughters Princess Beatrice and Eugenie following the death of the Duke of Edinburgh.

It was believed Andrew and Sarah had been walking the dogs in the months leading to the Queen’s death.

The Queen owned more than 30 of the sandy, short-legged dogs throughout her reign after her father gave her her first corgi for her 18th birthday.

Her dogs were given the Royal treatment having their own rooms with elevated wicker baskets and meals of beef, chick, rabbit, liver, cabbage and rice being prepared by a chef each evening. 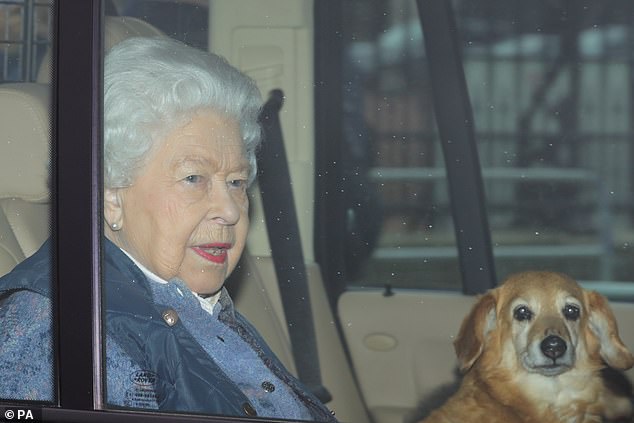 The Queen owned over 30 corgis over the course of her life. Pictured in 2020 with Fergus – who was a cross between a corgi and a dachshund 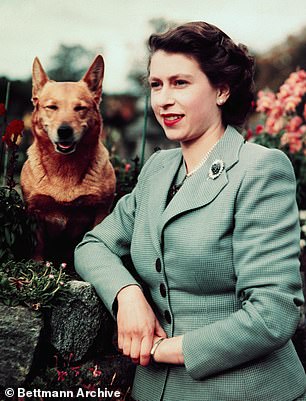 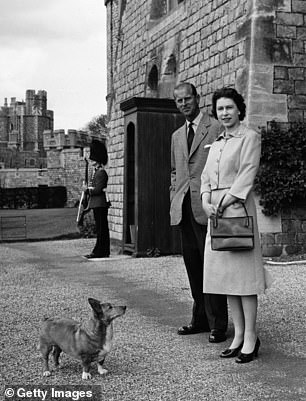 Her Majesty was given her first corgi at the age of 18 by her father King George VI. Pictured left in 1952 with one of her beloved dogs. Pictured right in 1959 with Duke of Edinburgh at the entrance of Windsor Castle

Sometimes the Queen herself made the dog’s meals. But her late husband was said to have ‘loathed’ the dogs’ yapping.

Muick, pronounced Mick, joined the royal family at the start of 2021 along with a so-called ‘dorgi’, a cross between a corgi and a dachshund, called Fergus.

Fergus died after just five months and was later replaced with a new corgi called Sandy, as a 95th birthday present from Prince Andrew and his daughters, Princesses Beatrice and Eugenie.

Speaking at the time of the new corgi arrivals, the Queen’s dresser Angela Kelly, said: ‘I was worried they would get under the Queen’s feet, but they have turned out to be a godsend.

‘They are beautiful and great fun and the Queen often takes long walks with them in Home Park.’ 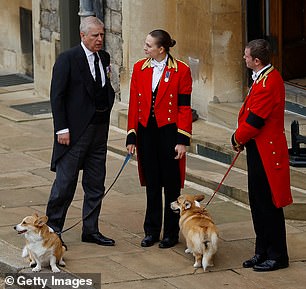 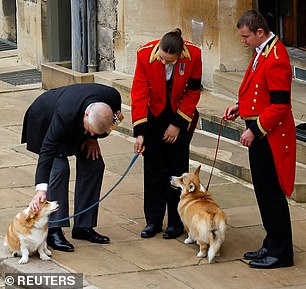 Behaviour expert Dr Roger Mugford, who helped the Queen manage her pack of corgis over the years, said that the animals were ‘psychologically so important’ for the Queen’s happiness.

Palace sources speaking to the Daily Mail previously revealed the beloved corgis were ‘with [the Queen] in the room’ at her deathbed when she died on September 8 at Balmoral.

They then touched people’s hearts when they made a poignant appearance at Her Majesty’s funeral on September 19.

As the late monarch’s coffin made its way from London to its final resting place in Windsor, Muick and Sandy waited for the processional to pass, to see the Queen for one last time.

The dogs were seen waiting in the quadrangle with two aides before the late monarch was laid to rest in St George’s Chapel.