SARAH VINE: We can’t be expected to live like this, to march day and night to this relentless drumbeat of anxiety

Watching the news on Monday evening, I felt a sudden and quite unexpected wave of rage. Nicola Sturgeon was on screen, that tight little mouth of hers busy threatening tight new Covid restrictions for Scotland.

It seemed as though she was enjoying the moment a little too much, that there was almost a quiver of pleasure at the prospect of the power she was exercising over her fellow countrymen and women.

Elsewhere, there was the sight and sound of endless experts, all gearing up to tell us how thoroughly miserable the next few weeks are going to be. Softening us up, wearing us down, reminding us of the instruments of torture: masks, social distancing, travel restrictions and, of course, lockdown.

It’s all so bloody predictable. Along comes a variant — as we always knew it would — and it’s somehow as though the powers-that-be can’t wait for the machinery of oppression to kick in. In fact, it seems like they relish it. Go directly to jail. Do not pass Go. Do not collect £200. Or anything, for that matter. 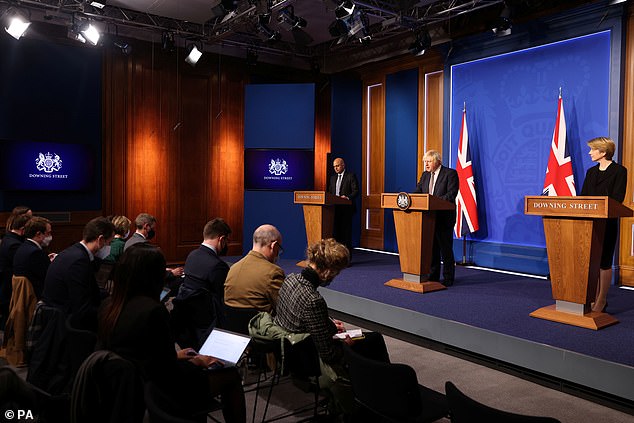 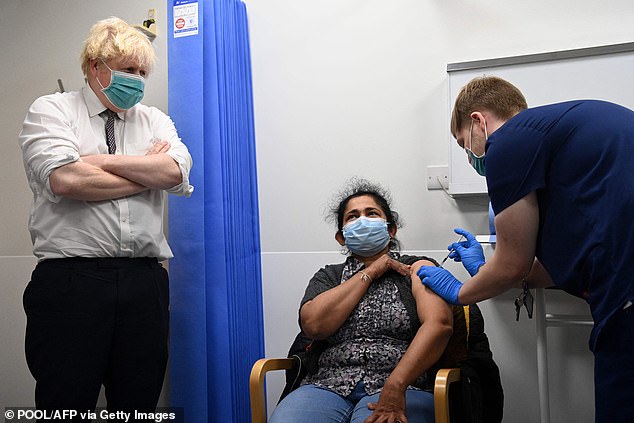 Prime Minister Boris Johnson wearing a face covering to combat the spread of the coronavirus, stands beside a member of the public receiving the vaccine during his visit to Lordship Lane Primary Care centre in north London today

When this whole thing started, it was about saving lives. We didn’t understand the virus, we didn’t have a vaccine, we didn’t have a cure; and so the only thing to do was keep ourselves to ourselves until all the clever people had come up with some workable solutions.

It was not fine, on any level, but we pulled together as a nation, as humans, and made it work as best we could. It cost us our health, our sanity and trillions of pounds — but we did it, and now we have a vaccine and treatment protocols that make Covid, while by no means a spent force, a disease we can reasonably expect to manage.

The death toll given on Monday, the same night that Sturgeon was dispensing doom, was 35. Out of a population of what, nearly 70 million? Though each loss is a tragedy in itself, if that’s not a victory of sorts, I don’t know what is.

But no. Forget all that, forget the jabs, forget the booster. We’ve gone from nought to Armageddon in the space of about three days — and it makes no sense.

We don’t need to start enforcing draconian measures — we’re nowhere near that point. And yet already it almost feels that they’re as good as back in place, and the grim inevitability of lockdown is only a few hastily arranged press conferences away.

It’s like the authorities — not just in Britain, but all around the world — can’t wait to get us back in our boxes. To crush our spirit, to make us feel like fools for even daring to dream of a way out of this nightmare.

It seems unthinkable, but it’s almost as though politicians such as Sturgeon and beyond have become so addicted to the power that Covid gives them they almost don’t want this to be over.

Because what else explains this rush, this eagerness for a return to restrictions — if not the fact that they represent the power to control and monitor their populations to a greater degree than ever before in the history of humanity. To reduce us all to little more than acquiescent, docile QR-codes, too scared, worn down and exhausted to object.

In Austria, the government has effectively interned a third of its population as a danger to public health; the Germans are contemplating doing the same.

All over the world, it’s the same old story, with greater or lesser abuses of power, depending on the nature of the regime. It’s almost as though having got a taste for keeping us all in line during lockdown and through systems such as Test and Trace, they would quite like things to stay that way.

Hence all the scaremongering. It feels like they’re grinding us down so we feel too scared and tired to complain, and pathetically grateful for the tiny crumbs of freedom they throw us — freedoms that, until recently, seemed to be inalienable, unquestionable, centuries-old rights.

But this is wrong, all wrong. We can’t be expected to live like this, to march day and night to this relentless drumbeat of anxiety.

People can’t be made to feel like criminals for daring to plan a holiday or a Christmas party or even a simple outing to the shops without the prospect of being kicked sideways by some new restriction. This is Great Britain, not Communist China. Or at least it’s supposed to be.

Also, I don’t know about you, but I honestly don’t think I can do a fourth lockdown. I feel like I’ve only just survived the past two years by the skin of my teeth. I’m really not sure I have the mental or physical reserves for any more misery.

So many of my friends and relatives feel the same. To a greater or lesser degree, they have all faced challenges over the past two years — and it’s taken its toll.

I can see it in their faces, in the way their eyes fill with tears at the slightest hint of kindness; hear it in their voices when we talk over the phone. They are scared, angry, tired, ill through worry. It can’t go on. And it shouldn’t.

We have the vaccine, we have the antiviral drugs. It’s never going to get much better than that, in terms of how we treat Covid. 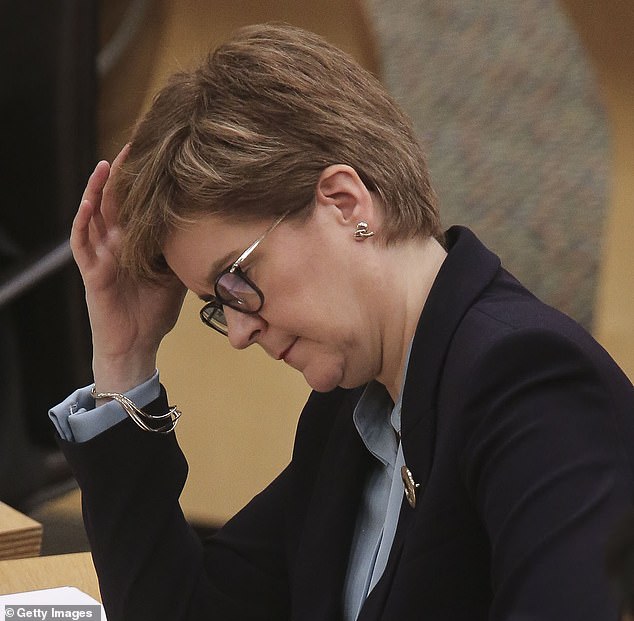 But unless and until we take lockdowns off the table, the vast majority of the population, for whom the virus presents very little threat — that is to say people under the age of 50 — are going to have their lives ruined in perpetuity by governments too weak or too cowardly to show the kind of wisdom and leadership the situation demands.

We have to learn to live with this thing. And by that I don’t mean striving for ‘zero Covid’, or fundamentally altering the way society works. I mean accepting that it’s an imperfect compromise — like almost everything in life — and just doing our best to stay safe.

Like we do every time we cross the road or plug in an appliance or boil the kettle — or do any of the million other things that might, theoretically, lead to our demise.

Humans deal with the hardships of the present by looking to the future and planning for a better, happier tomorrow.

Take that away, and you take away hope. And right now, hope is the only thing that’s keeping many people afloat.

Get chilly Lily a cosy coat!

There were many unusual looks on show at Monday night’s 2021 Fashion Awards at the Royal Albert Hall; but most striking of all was singer Lily Allen, who must have been freezing in a backless, sideless silver waistcoat — not least because there isn’t an ounce of flesh on the poor woman.

I know being very slender is considered a virtue in fashion circles; but you can have too much of a good thing.

Watching part two of the BBC’s much-hyped documentary, The Princes And The Press, the only thing of real interest was the amount of jewellery that presenter Amol Rajan wears. Considerably more, in fact, than the Duchess of Sussex. Which is saying something.

Labour leader Sir Keir Starmer’s reshuffle is the very definition of rearranging deckchairs on the Titanic. Most surprising of all was Ed Miliband being moved from shadow business to shadow climate change. Who even knew that he was there in the first place?

I was TROUBLED to read that the number of employment tribunals citing the menopause has risen steeply in the past couple of years.

Of course, it’s important that menopausal women stick up for themselves. But I wouldn’t want to end up in a situation where employers are reluctant to hire or promote women of menopausal age for fear of ending up in litigation.

Midlife women already find it hard enough to obtain work, since they’re often coming back into the marketplace after years off caring for children; let’s not erect another barrier to entry.