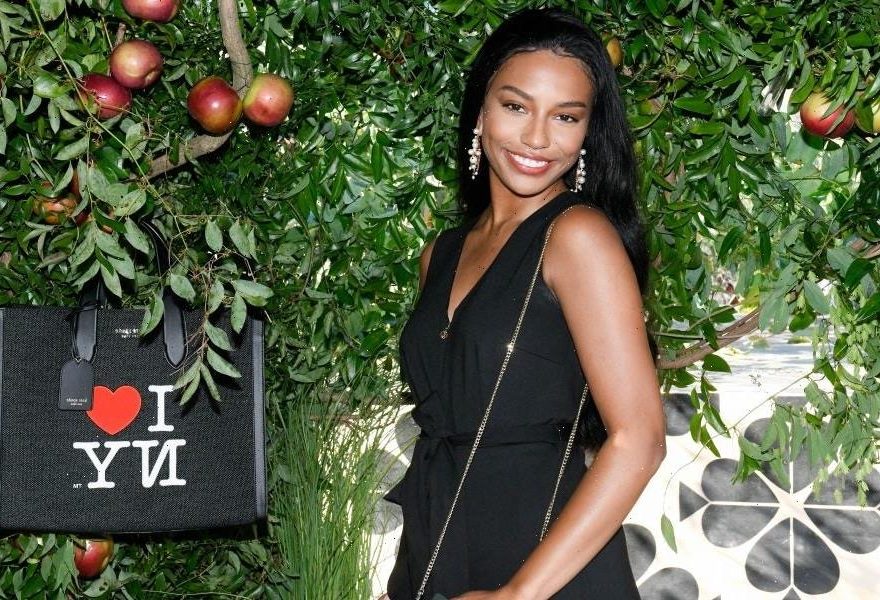 When I was first introduced to her under the apple orchard at Kate Spade’s New York Fashion Week activation at Gansevoort Plaza, her makeup was flawless and her hair was laid. “I’m having a Cher moment,” Gossip Girl actress Savannah Smith told me as she ran her Kate Spade ring-studded fingers through her tresses while holding a bottle of sparkling water in the other available hand. We joined in for a quick chuckle before beginning the interview as we walked over away from the live symphony-style music to top off the perfect September brunch vibes the outdoor area was giving.

When asked how her New York Fashion Week experience was going thus far, she shockingly told ESSENCE that this was her first-ever New York Fashion Week. What could’ve been a better introduction than an urban apple orchard to celebrate Kate Spade’s year-long love letter to New York City. Smith, 20, described the activation as “caszh,” which was a shortcut for saying “casual,” and admitted to having a good time.

In addition to a beautiful environment between Ninth Avenue and Hudson Street, Kate Spade New York will be using their apples and the featured apple trees as a donation to Materials for the Arts. According to the press release sent exclusively to ESSENCE, Materials for the Arts is a “New York-based organization whose mission is to collect unused materials for upcycling purposes, keep them out of landfills and give them to thousands of nonprofits and public schools for creative reuse projects.” Though the trees will be repurposed in public green spaces throughout the New York City area, Materials for the Arts will “collect the apples to be donated to local nonprofits, reinforcing the brand’s commitment to reducing waste.”

“Gossip Girl‘s my first thing ever, my first gig, so I’ve never been in Fashion Week. I’ve been dreaming about it since I was a little girl so I’m excited. I think this is a really cool way to kick it off,” Smith said.

Not only was she able to have her New York Fashion Week debut at Kate Spade, but Smith was also dubbed as an official partner of the Kate Spade NY brand. How does a newcomer on the scene snag such a once-in-a-lifetime opportunity? “Honestly, I don’t know. They just – I guess they like me,” she said sweetly. As a longtime lover of the iconic fashion brand, Smith has always admired the jewelry and accessories much like the Kate Spade pearl caviar statement earrings and matching pearl caviar statement ring decorating her body. Her maren pumps and big apple cross body added a bit of pizazz to her ponte sleeveless jumpsuit.

“They were like, ‘Do you want to come to Fashion Week?’ And I was like, ‘Sure’,” Smith put it simply. As I complimented her ensemble, she did an impromptu modeling session to show her outfit from head to toe as we both praised the full fit. “It’s cute. It’s giving sleek, but it’s also a day look, but it can also be a night look. That’s what I like about it. I can go out after this.”

With her outfit as a prime example, Smith believes that Kate Spade does a phenomenal job at upping the anty of a minimalistic look. “Kate Spade does a really good job of making simplicity look gorgeous. Classy is the perfect word to describe Kate Spade,” she described the late designer’s lasting impact on the fashion industry. “I like simple. I don’t like wearing a lot of layers. I like very sleek, form-fitting things. She does a great job of catering to a lot of different styles for a lot of different women.”

Smith, who is currently studying at NYU’s Tisch School of the Arts according to Deadline, noted that her new on-screen home of Gossip Girl is the embodiment of New York-style fashion and captures its essence effortlessly. She recalled the time when she attended her first fitting for the show with costume designer Eric Daman. Spitballing, she asked him how much her entire outfit would cost, to which he responded: “Probably over $10K. Moving on.”

While she was taken aback by the costliness of just one outfit, Smith appreciated the decadence and elegance of every piece for Gossip Girl. Onset at the fictitious high school located in New York City or out late for a scandalous rendezvous, the characters were always slaying. “[Gossip Girl] pulls in a lot of New York fashion brands and things that are home to New York. It just shows the rich Upper East Sider look, which I think is insane, but it looks good,” she laughed.

She and her character, Constance Billard’s HBIC Monet de Haan, may share the same vessel on and off-screen. Both young ladies are in the LGBTQ+ community, to which Smith admitted in Wonderland Magazine when identifying as a “Black, bisexual woman in the media” and confirmed that de Haan was a lesbian per fan speculation. However, if there’s one thing that de Haan and Smith don’t share, it’s their sense of fashion. She describes the opposing tastes as “day and night”.

“I would never wear what Monet wears, [but] some things I would,” Smith said, catching herself in a ‘never say never’ moment. She referred to episode 12 when her character wore a “sickening” red dress to a New Year’s Eve party. “I want it, I want to get it, but it’s literally $1,000, so maybe not.”

In contrast to Smith herself, de Haan wears more jewelry and makes bolder and more “over the top” fashion statements, as Smith would describe. For herself, she favors a cleaner yet fashion-forward upkeep. “I kind of like to start with a simple foundation and then build with really cool, big, chunky statement pieces. I also like to have a little androgynous look sometimes. I love my boots, I love my trousers, I love my suits. Monet, she’s very femme.”

Before we parted ways in the Meatpacking District-based event, Smith shared her fall must-haves as the weather began to transition from scorching hot summers to a crisper pumpkin spice-filled breeze. First on her list was “a great scarf,” which she deemed as a “gorgeous” addition to any fall wardrobe. “I’m kind of over the Burberry moment. I want more of a plaid, chunky knit,” she shared. Smith also noted a cashmere sweater to “throw it on with everything,” and one more item that we both agreed every lady must own.

“A good pair of black knee-high boots,” she added to her list as lucky number three while bringing her hand right above her knee cap to symbolize the shoes. “Love a knee-high, love a thigh-high. Let’s do it, let’s go all the way.”

Part two of Gossip Girl‘s first season is slated to be released on HBO Max in November 2021, though no official release date has been confirmed. The New York-inspired capsule collection featuring the “I LOVE NY” signature logo is available now on katespade.com and ranges from $25 to $398 in pricing.