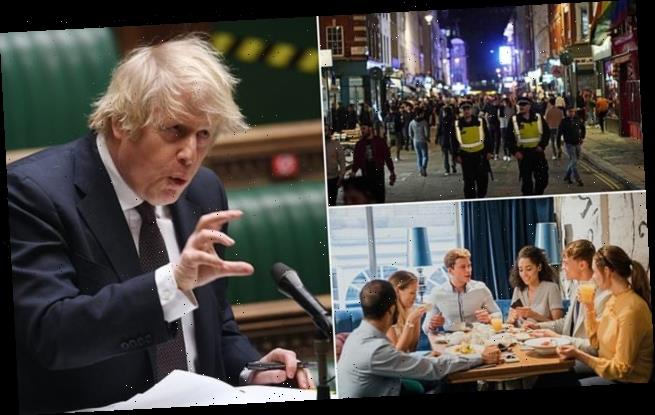 The time has come for us to put Boris Johnson back on the psychiatrist’s couch, and try to get to the bottom of the enormous change that has come over him.

More specifically, why has a man who not long ago was cavalier to the point of irresponsibility become the most unbending and hesitant of prime ministers, at any rate in matters to do with Covid?

That he was until recently the opposite of doctrinaire can scarcely be denied. There is an online video of him boasting on March 3 last year of shaking hands with patients, some of whom had coronavirus, during a visit to a hospital. He was speaking with a boyish grin.

We know some of the factors that have turned him from someone with similarities to Shakespeare’s roistering Sir Toby Belch into a person more resembling the puritanical and officious Malvolio.

A year ago Boris was slow to appreciate the seriousness of the pandemic, and was much criticised.

He took us into the first lockdown a week or so too late, and copped it at the bar of expert opinion once again. According to some, he dawdled as the second wave built up last September. 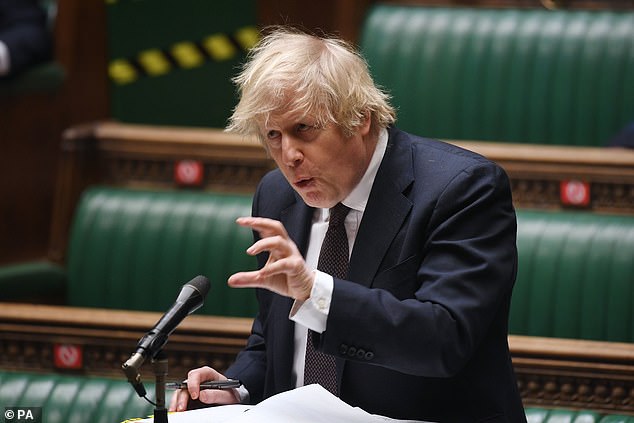 Boris Johnson during Prime Minister’s Questions in the House of Commons yesterday, as he comes under pressure to lift lockdown quicker 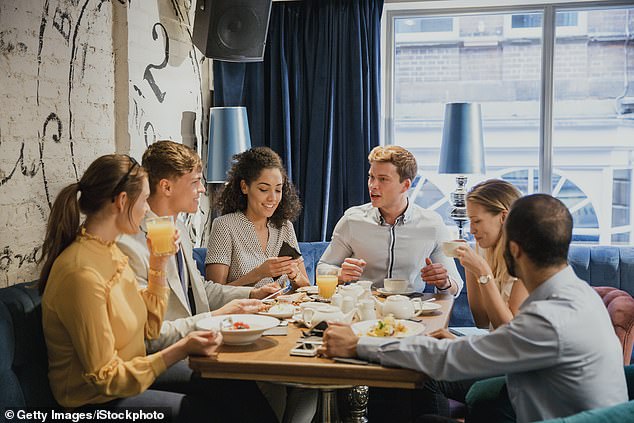 Hospitality settings can open for indoor service on May 17, although there are calls for that date to be moved forward 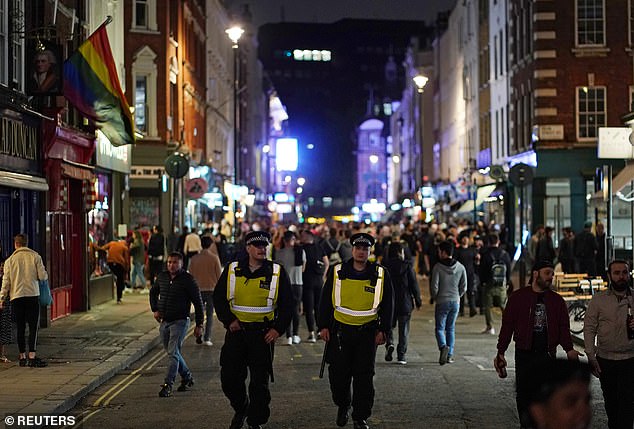 Police on the streets in Soho, London, in July last year when restrictions were eased in the summer

In every case, his optimistic, gung-ho nature — wishing to preserve jobs and livelihoods, and to fire up the economy — triumphed for a while over scientists pressing their advice.

This time it’s different. Although infection rates and the daily death toll are plummeting far faster than seemed possible a month ago, Boris Johnson seems determined to stick to his guns.

‘Data not dates’ is his oft repeated watchword, but in reality that means the opposite — ‘dates not data’. He is clinging to his timetable.

And so I find myself weighing up the possible advantages of living in a regime run by Wales’s First Minister, the Corbynista Mark Drakeford.

There it is already possible to have a haircut, and play sport outdoors, though the current lockdown did begin three weeks before England’s.

It’s true, however, that Mr Drakeford has been slow to send children back to school because he takes his instructions from the teaching unions.

I even cast a half envious glance north of the border at Nicola Sturgeon’s one-party state, where golf is now permitted and hairdressers are sharpening their scissors before reopening on April 5.

But in Boris’s realm, outdoor sport isn’t allowed for another 11 days, and those hoping to have their locks shorn will have to wait until April 12. 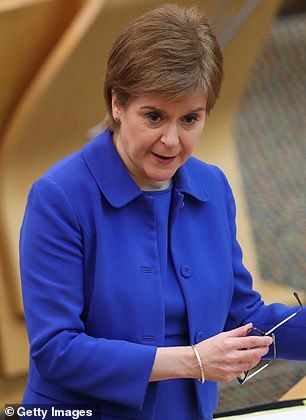 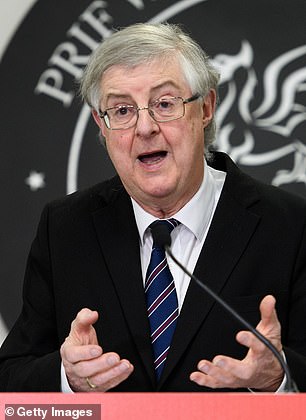 It’s a rum business when the once carefree Boris Johnson appears more cautious than the grim Welsh First Minister Mark Drakeford (right) and the dour Nicola Sturgeon (left), both of whom are wont to slap on new restrictions whenever possible

So-called non-essential shops will get going on that date, a week after some of them have thrown open their doors in Nicola’s patch.

It’s a rum business when the once carefree Boris Johnson appears more cautious than the grim Mr Drakeford and the dour Ms Sturgeon, both of whom are wont to slap on new restrictions whenever possible. That is the measure of his transformation.

My suggestion is not that every step in the timetable for England should be instantly relaxed. It makes sense to assess the effect of the reopening of schools earlier this month on the infection rate before re-examining any dates.

But plunging figures are an astonishing fact of life. The latest official daily infection rate issued yesterday was 5,758 and the daily death toll was 141. The comparative daily figures for four weeks earlier were 10,624 new cases and 800 deaths.

The truth is that the vaccination roll-out (whose success former adviser Dominic Cummings rightly attributed yesterday to No 10 rather than the ‘smoking ruin’ of Matt Hancock’s Health Department) has driven down rates much more quickly than anyone could have predicted.

Back in February, when the timetable for getting out of lockdown was conceived, no one can have had any idea how effective the vaccination programme would be. The facts have changed, and the Prime Minister’s — and the scientists’ — views should change with them.

This week alone over four million jabs are expected be administered in the UK — almost half of all the vaccines that have been received so far in either Germany or Italy.

It’s true, following last night’s concerning revelation, that there will be a ‘significant reduction in the weekly supply’ of vaccines during April, which will delay the jab for the under-50s. But it remains likely that all over-50s will have been offered a vaccination by the end of this month. 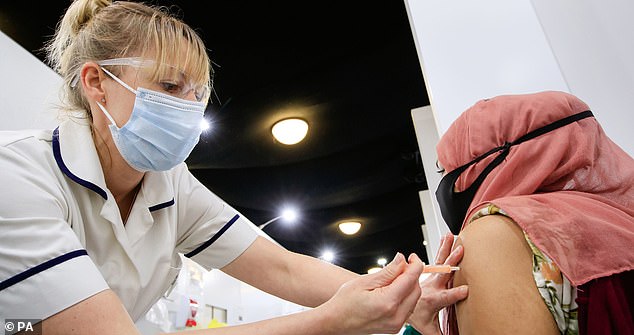 The vaccination roll-out has driven down rates much more quickly than anyone could have predicted. Pictured: a vaccine centre in Leeds

According to the Office for National Statistics last year, only two people in every 100 who die from Covid are below the age of 50, and some of these will have underlying health conditions. The short postponement of vaccines for the under-50s does not give the Prime Minister any excuse to stick stubbornly to his dates.

Granted, one jab doesn’t provide complete protection. Nevertheless, we will soon be able to say that the vast majority of people at greatest danger from Covid have a significant measure of protection — provided, of course, that they have been vaccinated.

Set against this rapidly improving situation are the grim facts of continuing lockdown. The costs of furlough alone are put at £132 million a day, or some £4 billion a month. There is incalculable pain for hospitality businesses forced to stay shut.

Innumerable stories in the Press have highlighted the predicament of cancer patients denied treatment because of Covid logjams in hospitals. Many with serious symptoms can’t see a doctor.

And all of us, of course, are suffering to some degree from the effects of lockdown, though I count myself among the most fortunate. Whether we have straightforward ‘cabin fever’, or more serious mental health issues, this purgatory shouldn’t last a day longer than is necessary.

There is another consideration. Many of us observe busier roads, and in London crammed tube trains. It seems some people are deciding it’s time for lockdown to be over. When responsible people flout the law, it’s usually sensible to take another look at the law.

Why can’t Boris, who is virtually unchallenged in the Cabinet, see that it makes no sense to cleave to his timetable, which was drawn up in such very different circumstances? As things stand, we can’t enter a pub, cafe or restaurant in England for another two months. That seems absurd.

We know why the Prime Minister is so cautious. He has had his fingers burnt more than once, and is terrified of scientists in general, and the assertive Chief Medical Officer Chris Whitty in particular.

Much safer — Boris almost certainly thinks — to prolong the lockdown, and so avoid any risk of anything going wrong by lifting it too early. Let’s just say that political calculation forms part of his considerations.

But might history not censure him for excessive caution as much as for earlier carelessness? There will have to be an inquiry, though his enemies are wrong to call for one before the pandemic is over. How ironic if it criticised the PM for having been too lax and too rigid!

Boris is like a general who has won a battle without quite realising it. His victory has been the vaccination programme. And yet his mind is clouded by the memory of past defeats.

Let me emphasise again that last night’s revelations about postponing jabs for the under-50s do not provide the PM with any justification for dragging his feet.

The argument is not that all restrictions must be immediately removed. Data, not dates, are all we seek — and evidence that Boris Johnson, so shaken by the experiences of the past year, still has an open mind.