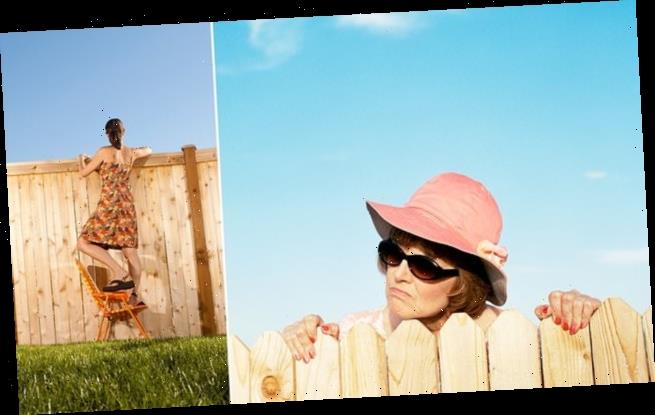 The most hilarious neighbourhood watch ever! It’s a curtain-twitcher’s dream — the ultra-local website where neighbours rail against everything from badly parked cars to mysterious smells

Sylvia is rather concerned about a suspicious character she has seen lurking in our neighbourhood.

‘He is wearing a high-vis jacket and carrying one of those litter pickers,’ she reports. ‘I approached him and he told me to mind my own business. Something’s just not right.’

Unless there’s a new type of conscientious criminal who likes to tidy the street before breaking into houses and stealing cars, then I think it’s fair to assume the gentleman was a street cleaner doing his job.

Yet Sylvia’s post is the tip of the iceberg when it comes to the delightfully bonkers world of Nextdoor, a community app and website that has boomed during lockdown. 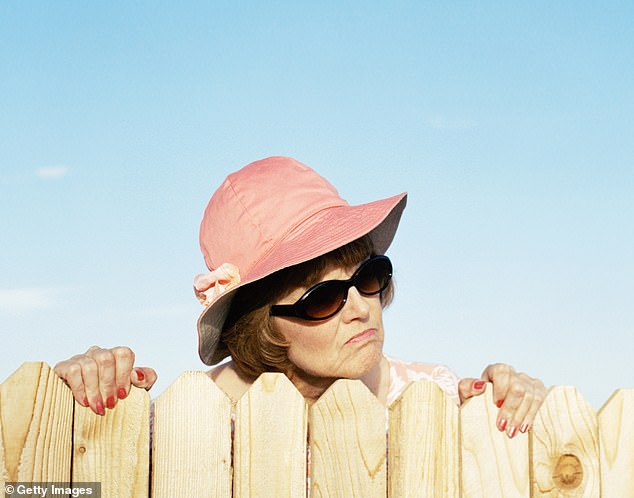 It allows you to connect with people in your neighbourhood where, as well as offering things for sale, users also post about everything from their thoughts on cycle lanes and potholes, to reports of badly parked cars and lost cats. Oh my goodness, the lost cats — but we’ll come back to those later.

There are 15,000 UK ‘neighbourhoods’ on Nextdoor, some covering only a handful of streets. In some regions, as many as one in three households have signed up.

It’s free although a little fiddly to join, as your mobile phone billing address must match the one you register with and you have to enter a code, sent by text or post, to verify it.

I joined more than a year ago and it’s not an exaggeration to say that, at times, it’s been a lifesaver… but possibly not for the right reasons. I live in Sussex, and my group has 464 members who live nearest me, not the whole town.

It provides a unique window into the weird, hilarious and, at times, downright disturbing lives, thoughts and feelings of the people living on your doorstep. It’s provided me with many much-needed chuckles during the dark days of the pandemic.

In the early days of lockdown, Nextdoor experienced an 80 per cent surge in use as Brits, unable to see loved ones, yearned for some kind of human contact (as well as a chance to whinge about bin collections and white-van drivers).

Posts such as Sylvia’s are typical of Nextdoor fodder, with local curtain-twitchers desperate to report what they consider to be unusual activity that we should all be aware of.

Apparently, the incredibly safe and leafy area I live in is a hotbed of menacing men ringing doorbells (CCTV footage of perfectly innocent delivery men at front doors is commonplace on Nextdoor). 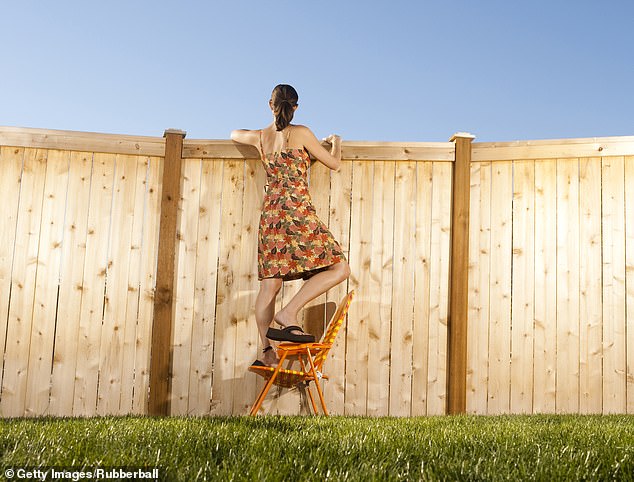 On the app, Geoff asked the owner of a discarded dog lead he found to pass security checks before he would hand it over (file image)

Not to mention the gangs of dangerous hoodie-clad youths prowling the streets (children walking home from school).

Just this morning, Nancy wanted everyone to be on high alert for a dognapper she had seen lurking in the local park. The man didn’t actually try to snatch her pet, but he was walking very slowly and that was good enough for Nancy.

This is the very same park where, last week, Geoff found a discarded dog lead. He posted pictures of it and asked that the owner contact him privately so that the lead could be handed over… but not before they’d passed a few security checks.

Geoff let it be known he would ask any potential claimant to answer key questions about the lead to ‘weed out timewasters’.

I got my own taster of the people who walk among us when I tried to sell a fridge-freezer to someone local last summer, when lockdown had been lifted.

One asked if I could wheel it to the front gate so they could do a drive-by viewing. Another wondered if I could separate the fridge from the freezer as they only wanted that half. In the end, I paid the council to take it away.

Open up the For Sale section of any Nextdoor group and you’ll find yourself falling down a glorious rabbit hole.

The treasure trove of items available in my area includes a 1,000-piece Spider-Man jigsaw puzzle that has ‘no more than eight pieces missing’ and is yours for a bargain £3. 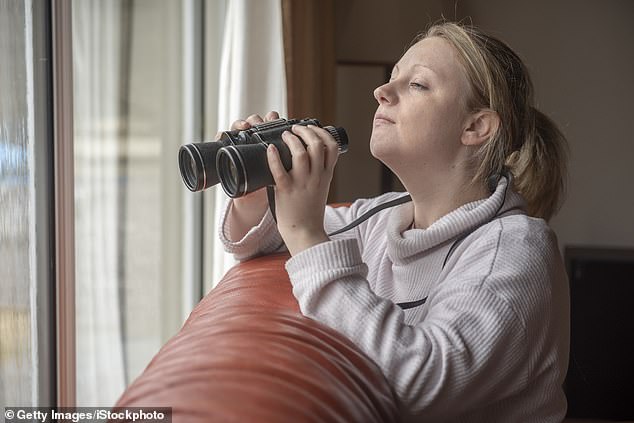 And one chancer is hoping to get £350 for a sofa that is so filthy and battered it looks as though it’s been tied to a lorry and dragged through the streets.

Head-scratcher of the day is the person asking £1 for a bundle of appliance manuals for various washing machines, dishwashers and ovens.

The Free section is even more fun. While some offerings may be from generous souls who want to spread joy, mostly it’s people trying to offload old tat they can’t be bothered to take to the dump.

Any takers for Martine’s ‘bag of bits and bobs’ that includes single shoes? Perhaps you’re in the market for a broken iron that Carol is certain a ‘clever person could easily fix’? I’ll race you to Corinne’s bin bag full of empty egg boxes that she’s thoughtfully placed outside No 27. ‘Help yourself!’

But it’s the humdrum posts, about the trivial things we all obsess over, that make Nextdoor uniquely entertaining.

It’s a hive of activity on bin collection days as people fret over what time the dustmen will arrive, and whether they’ll put the bins back in the right place.

Today, Ben is furious that a horsebox is parked close to his house when he ‘knows for a fact’ nobody on his road owns a horse.

But nothing quite compares to the fury a car parked on a pavement will provoke. 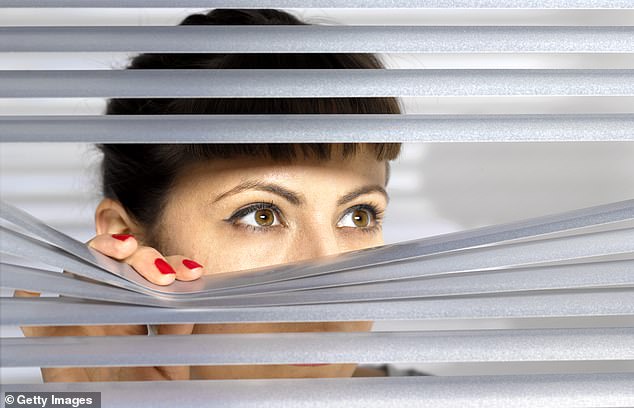 On the app, Jill uploaded a picture showing herself holding three metal rods that were quickly identified by members (file image)

Nextdoor users will gather to upload pictures of the offending vehicle, they’ll check whether it has valid tax through the gov.uk website and will litter the windscreen with angry notes which they will also photograph and upload.

Should the people who run Nextdoor be considering new categories for the site then I would suggest: ‘What’s that noise?’ ‘Can anyone smell that?’ And… ‘Can you identify this thing I’m holding in my hand?’

Nextdoor detectives are currently hard at work trying to discover the source of the ‘whirring’ noise that Sally can hear. So far, they’ve ruled out: traffic, helicopters, roadworks, as well as her chemical toilet and immersion heater.

However, when Jill uploaded a picture showing herself holding three metal rods under the heading ‘What are these?’ they were identified as electric drill attachments in record time.

Who Doreen is, I have no idea. But when we’re able to, I would like to give her a huge hug for unwittingly giving me my biggest laugh of the week.

She wrote, in a post that could have come straight from a Victoria Wood sketch, to ask if there was any way of finding out if an old family friend was dead.

This friend did not send her a Christmas card which, at first, she was angry about, but now fears the worst. She says there is no point ringing as the friend never answers the phone. 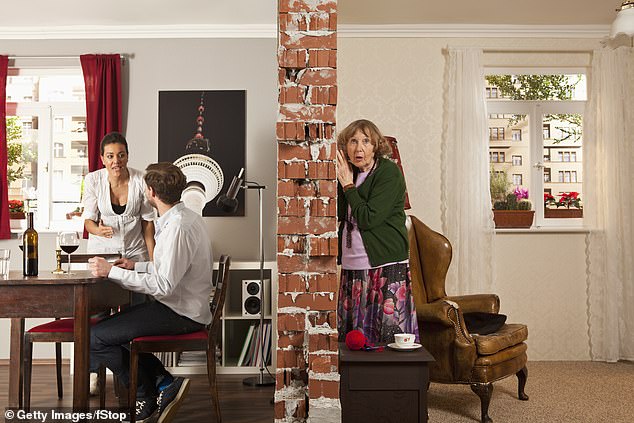 People made practical suggestions that Doreen quickly rejected. When someone proposed driving to the address to check for herself, Doreen replied: ‘I’m not making a special trip. We weren’t that close.’

There’s nothing Nextdoor folk love more than a drama.

When a series of chalked numbers appeared overnight on walls and pavements near me, people rushed to claim they were the work of criminal gangs.

The numbers were codes that gave them information about those living in the houses, identifying details about the residents they intended to rob in our beds.

Rather boringly, it turned out not to be the work of the Sussex equivalent of The Bloods and The Crips, but Southern Water about to lay new pipes.

But it’s the ‘lost cats’ that dominate Nextdoor groups. These are a combination of owners who say their pets have gone missing and others claiming to have found ‘lost’ cats in their garden.

As any cat owner knows, they’re feral creatures. Outdoor cats love to roam and it’s not unusual for a pet to disappear for long periods, especially if somebody is putting out food for them.

Try telling that to the likes of Jenny in my group who posted a picture of a ‘lost’ cat this week.

‘He is very inquisitive and I am worried this may land him in trouble,’ she stated, as if writing about a naughty toddler not a street-smart moggie.

The category is also full of desperate posts from owners pleading for people to keep an eye out for their lost cat — only for a jubilant ‘Found safe and well!’ post to follow shortly afterwards.

They say everyone needs good neighbours, but Nextdoor has taught me that the curtain-twitching ones prone to hearing odd noises, smelling weird smells and rescuing ‘lost’ cats can be great value, too.

names have been changed.