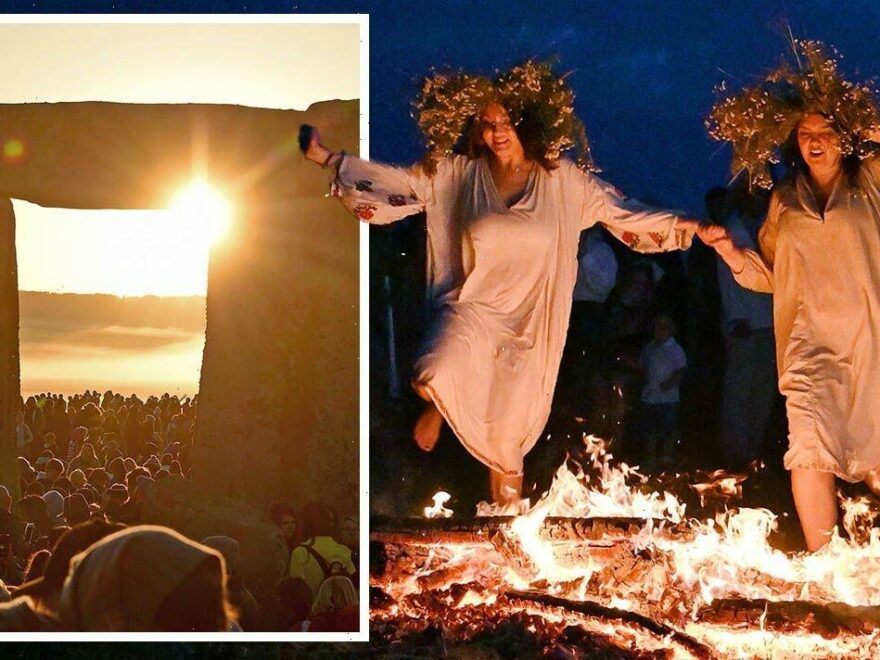 The summer solstice occurs on the longest day of the year, marking the only day in the calendar that the sun rises perfectly in the middle of the stones at Stonehenge. Every year, large crowds are drawn to view the celestial event unfold on the formation’s central altar, but it’s not the only way to celebrate the start of the astronomical summer. Here are some of the key summer solstice rituals that will be performed this year.

What rituals take place at Stonehenge on the summer solstice?

This year the summer solstice will take place on Tuesday, June 21, marking the return of even brighter evenings for the warm season ahead.

The UK will enjoy 16 hours and 43 minutes of daylight which will be welcomed by crowds of around 10,000 people, including garland-wearing hippies and druids waiting for the sun to appear at the iconic site in Amesbury, Wiltshire.

White-robed Druids may recite prayers and share food and drink while awaiting the sunrise at the 5,000 year-old “temple” of Stonehenge.

According to Druidry.org, the event is so significant because it symbolises the turning seasons and the cycle of life, death and rebirth.

One of the most well-known rituals performed at this time involves bringing scraps of material to represent the things that have been holding you back, and casting it to the ground.

Stonehenge opens in the early evening before the solstice, where the crowd quickly builds to attend the free event.

The London ToolKit travel guide said: “It’s a party atmosphere with pagan groups dressed and performing colourful ceremonies, the sound of drums and everybody in a good frame of mind that will cheer almost anything.

“This is an experience, hard to describe, and one you will remember all of your life.”

What other rituals take place?

Over the centuries, the June solstice has inspired many festivals and midsummer celebrations both within the druid community and other groups.

According to the National Trust, these customs serve both “practical needs” while others originate from “spiritual and superstitious beliefs”.

Hanging medicinal plants in doorways or dipped in water is commonly practised across Europe.

Both Sweden and Spain observe the custom which sees homes adorned with greenery to mark the beginning of the astronomical summer.

Lighting and jumping over bonfires is one of the most well-known rituals performed during the summer solstice, and is also done during ‘Midsummer’s Eve’ – a separate event which will take place on June 24.

This simple tradition dates back to pre-Christian pagan customs and is still observed today to “keep demons away and bring good luck to lovers”.

Bonfires by lakes and the sea are commonly seen in Finland to mark the occasion.

In Ukraine, the day takes on many of the pagan origins attached to the solstice, with young men and women leaping over flames to cleanse themselves of ill fortune.

Some Druids identify as Pagan, others as Christian, creating a mixture of traditions and rituals which have been performed over the years.

Following the establishment of the Christian Church, solstice celebrations were combined with St John’s Day, commemorating St John the Baptist.

The National Trust said: “In the 19th century, Christians used St John’s Day to act out the baptisms of children who had died as ‘pagans’.”

Spain celebrates the solstice with a traditional party in honour of Saint John the Baptist which will be held on the evening of June 23 this year.

Summer solstice celebrations are also celebrated beyond the Western world, with many ancient cultures and communities observing their own unique traditions on the longest day of the year.

The concept of sun worship is significant in ancient Egyptian religions, when the event aligned with the “rise of the river Nile and the deity of the sun”, according to the National Trust.