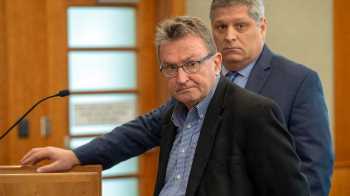 Sterling Van Wagenen, who co-founded the Sundance Film Festival, has been sentenced to at least six years in prison after pleading guilty to sexual abuse of a child.

Judge Robert Griffin delivered the sentence in a Utah court on Tuesday. He said during the proceeding that he hoped the parole board will keep the 72-year-old Van Wagenen in prison longer than the minimum.

Griffin also commended the young victim for reporting that Van Wagenen had touched her on two occasions between 2013 and 2015. Van Wagenen was charged April 2 with sexually abusing a child starting in 2013 when the child was seven years old.

The Sundance Institute issued a statement in April denouncing Van Wagenen and said he has not been connected to the festival since 1993.

Van Wagenen had resigned as a film professor in March from the University of Utah after allegedly admitting in a recording to molesting a minor in 1993, according to the Daily Utah Chronicle. The recording was released to the public by the Truth and Transparency Foundation, which operates the MormonLeaks platform for whistleblowers within the Church of Jesus Christ of Latter-day Saints.