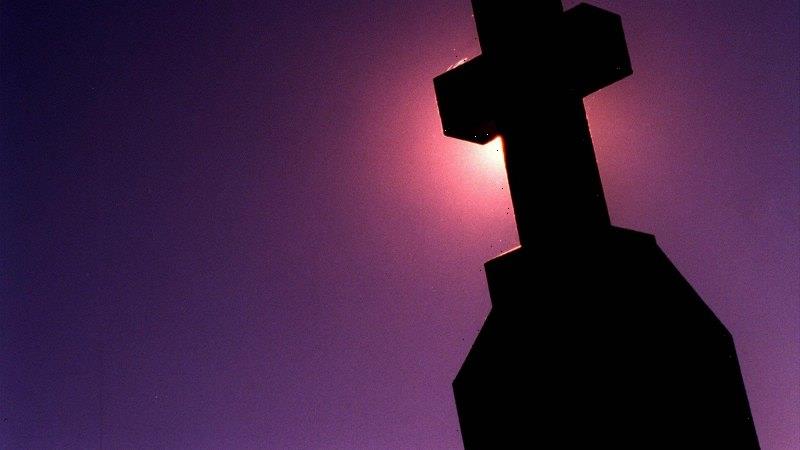 The argument supporting the Andrews’ government proposal to prohibit discrimination by faith-based organisations against LGBTIQ+ people can be summed up in one word. Tasmania.

Tasmanian discrimination law has prohibited discrimination against LGBTIQ+ people in all faith-based bodies, including schools, hospitals, charities and community services, since 1998. 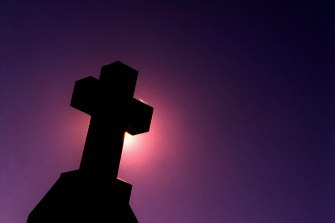 Tasmania’s faith-based laws to protect LGBTIQ+ people from discrimination are more inclusive than those proposed in Victoria.Credit:Virginia Star

For almost a quarter century, it has been illegal for faith-based bodies to expel a trans student, sack a gay teacher, refuse admittance to a lesbian couple giving birth, or turn away an LGBTIQ+ person in need.

For example, in 2018 Baptcare Tasmania won an LGBTIQ+ inclusion award for its staff training programs, and its services like foster care that specifically and very publicly recruit LGBTIQ+ foster parents. This was inconceivable in Tasmania 20 years ago.

A 2018 University of Tasmania study of LGBTIQ+ staff in faith-based organisations in Tasmania and NSW (where there are no protections) found “profound” differences.

Tasmanian staff were more secure, much less likely to face discrimination, more likely to be open, and felt they had greater career opportunities than their NSW counterparts.

Tasmanian participants in the study attributed their more favourable experience to their state’s Anti-Discrimination Act. 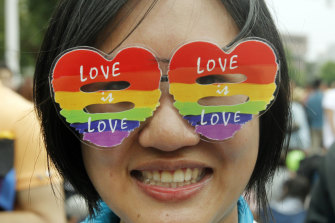 A study has found profound differences in worker satisfaction between states with and without protective legislation.Credit:AP

I don’t mean to suggest faith-based schools and services are perfect; there is still discrimination. But at least there is a legal framework for resolving claims of discrimination, and a broad awareness this framework exists.

Significantly, there have been no attempts by Tasmanian religious leaders or right-wing MPs to remove existing protections. There have been no public outcries about “religious freedom’ being violated, or people of faith “persecuted”.

There are compromises in the Victorian bill that are not found in Tasmanian law.

For example, the Andrews’ government is proposing that LGBTIQ+ people will only be protected in faith-based health, family and community services if these services are government-funded.

This would allow faith-based organisations to quarantine services like, for example, say, fostering and adoption.

If faith-based organisations could find enough private and church funding for such services, they could shut the door on LGBTIQ+ employees and clients.

Just as bad, the carve-out for services that aren’t government funded sends the message that discrimination against LGBTIQ+ people is still sometimes acceptable in Victoria.

None of this is the case in Tasmania because LGBTIQ+ people are protected in all faith-based services, including those that are church funded. Our law is based on the principle that services open to the public should be equally accessible regardless of where the money comes from.

The Victorian proposal also allows discrimination against students in faith-based schools that isn’t allowed in Tasmania. 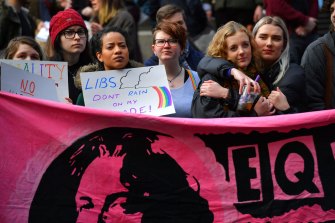 The Victorian legislation allows discrimination in faith-based school that is disallowed under Tasmanian law.Credit:Joe Armao

Faith-based schools in Tasmania can only discriminate on the grounds of religious belief or affiliation at first enrolment.

This was put in place to ensure religious belief isn’t used as an alternative way to discriminate against LGBTIQ+ students, especially during secondary school when they are more likely to come out.

In the Victorian proposal, discrimination on the ground of religious belief is allowed at any time in a student’s school career.

This opens up too many opportunities for LGBTIQ+ students to be harassed, bullied and discriminated against if a school deems their sexuality or gender identity to be against the school’s ethos.

Shortcomings such as these are part of a worrying trend under the current Victorian government.

For example, in 2019 Victoria looked very progressive when the Andrews government allowed transgender people to affirm their true gender on their birth certificate without the need for surgery.

But the government undermined the principle of transgender self-determination by insisting a trans person seeking an amended birth certificate first obtain a statement from another person to confirm they are who they say they are.

The Andrews government also balked at allowing people to take gender off their birth certificates altogether despite this being recommended by a number of health bodies for its positive impact on the mental health of trans and gender diverse people.

Tasmania’s gender recognition laws, passed before Victoria’s, do not require statements from others and do allow gender to be taken off birth certificates.

Tasmanian advocates were disappointed Victoria didn’t follow our lead, particularly given how hard we worked to pass gold-standard legislation in the face of a hostile state government.

Victoria is also set to expand its vilification laws to protect LGBTIQ+ people, yet no consideration has been given to protections from humiliating, intimidating, insulting and ridiculing conduct.

This conduct is prohibited under the Race Discrimination Act, and on a range of grounds in Tasmania, including sexual orientation and gender identity. Again, it’s disappointing Victoria has stopped short.

The Tasmanian experience shows that the Victorian government’s proposal to prevent LGBTIQ+ discrimination by faith-based organisations is not as radical and untested as some Victorian faith leaders will claim.

It shows the sky won’t fall in, that this is not part of a crusade against religion and that faith can benefit from laws that foster dignity and equality.

But the Tasmanian experience also shows the Andrews government does not need to skimp on equality with unnecessary caveats and compromises.

Such compromises won’t win it friends among its enemies, but they will leave vulnerable LGBTIQ+ people exposed to continued discrimination and prejudice.