A distressed daughter has revealed how her father only told her about his wedding when they arrived at the venue with 30 minutes to go.

Reddit user u/throglo, from America, shared a post online revealing her father had told her they were going to a ‘surprise party’ before they arrived at the courthouse.

She was stunned to learn that the surprise party was actually his wedding, and he hadn’t shared the news in case her mother, his ex-wife, caused any issues.

She went on to say that she refused to participate in the big day and demanded her father drive her home, explaining: ‘I felt extremely betrayed and lashed out at my dad horribly. I was crying and said some harsh things.’ 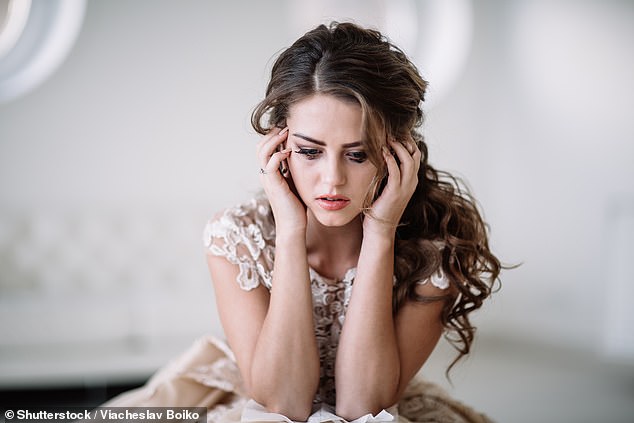 A distressed daughter, 14, from America, has revealed how her father only told her about his wedding when they arrived at the venue 30 minutes before the ceremony (stock image)

Posting online, she explained that her parents had divorced and shared custody of her, but that neither parent gets on with the other.

She penned: ‘They are always trying to get back at each other. And while my mom is more vocal with her pettiness, I can clearly see the b****** my dad pulls even though he tries to hide it.’

Describing how she learned about her father’s new marriage, the girl said: ‘I got picked up for my week with my dad and he says that we are going to his friend’s house an hour away for a surprise party.

‘I fell asleep and found us at an event hall. My dad’s smiling and says “surprise! It’s my wedding”. And then he says that me and his wife’s daughter are bridesmaids. 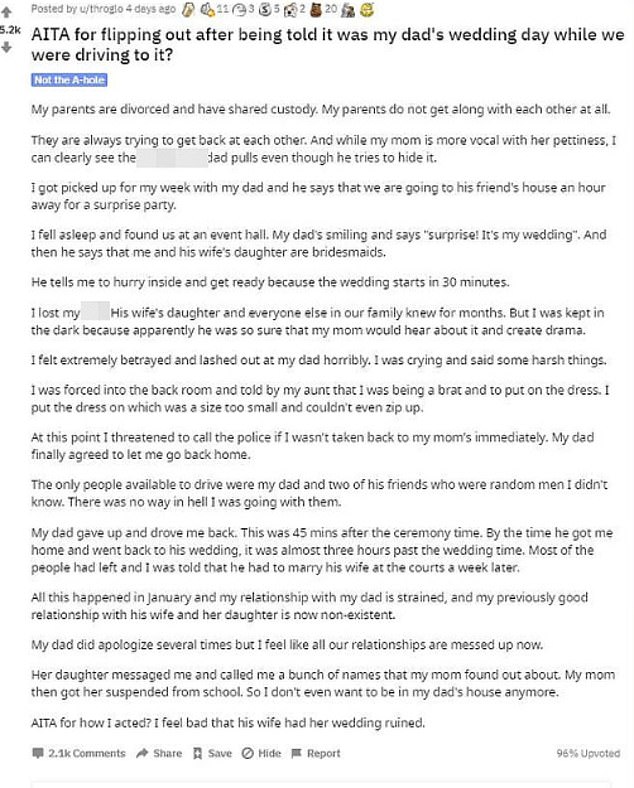 ‘He tells me to hurry inside and get ready because the wedding starts in 30 minutes.’

It was then revealed to her that her new step-sister and the rest of her family had known about the wedding for months, but it had been kept a secret from her.

The teen continued: ‘I was forced into the back room and told by my aunt that I was being a brat and to put on the dress. I put the dress on which was a size too small and couldn’t even zip up.’

Deciding she didn’t want to participate in the wedding, the girl claimed she threatened to call the police unless she was taken back home to her mother.

Not wanting to get into a car with strangers, she forced her father to drive her home which meant he was three hours late for his wedding.

She explained: ‘Most of the people had left and I was told that he had to marry his wife at the courts a week later.’

Despite her father apologizing to her for the way he acted, she now feels like their relationship has taken a turn for the worse.

Despite the ordeal, she asked other people on Reddit whether she was in the wrong for ruining the wedding.

Other users were stunned by what they heard, with one saying: ‘A surprise wedding is never a good idea.

Surprising your teenage kids and expecting them to be in the wedding goes down in history as one of the worst ideas of all time.’

Another added: ‘Seems like OP would have actually liked being a part of the wedding since she had a good relationship with the fiance and daughter before hand…but “getting back” at his ex was more important than his daughters happiness/comfort.’